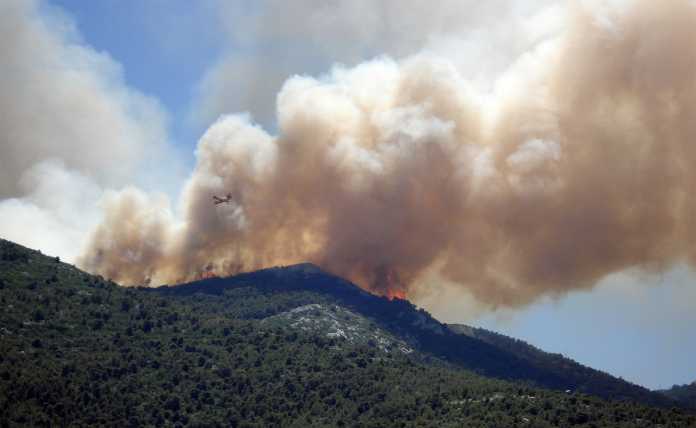 Among the top items in a Google News search under “climate change,” National Public Radio (NPR) is warning of a wildfire apocalypse, even as the United Nations reports a decline in drought and objective data show a decline in wildfires.

The NPR article, “Everything Is Unprecedented. Welcome To Your Hotter Earth,” asserts global warming makes wildfires worse, claiming “the most power wildfires … are all in our future.” That would require a sudden and unexplained reversal in recent climate trends.

Drought is the primary climate component that would affect wildfires. Yet, as reported in Climate at a Glance: Drought, the United Nations Intergovernmental Panel on Climate Change (IPCC) reports with “high confidence” that precipitation has increased over mid-latitude land areas of the Northern Hemisphere (including the United States) during the past 70 years.

Moreover, in 2017 and 2019, the United States registered its smallest percentage of land area experiencing drought in recorded history.

Still further, The United States is undergoing its longest period in recorded history with less than 40 percent of the country experiencing “very dry” conditions.

If global warming is making drought – and thus wildfires – more frequent and severe, why do the objective data show exactly the opposite?

Data from federal government sources confirm the IPCC’s findings. As reported in Climate at a Glance: Wildfires, long-term data from U.S. National Interagency Fire Center (NIFC) show wildfires have declined in number and severity in recent decades. Using data on U.S. wildfires from as far back as 1926, NIFC reports the numbers of acres burned is far less now than it was throughout the early 20th century. As Figure 1 below shows, current acres burned run about 1/4th to 1/5th of the record values which occurred in the 1930s.

Figure 1: Total wildfire acreage burned by year in the United States, 1926 to 2019. Data from https://www.nifc.gov/fireInfo/fireInfo_stats_totalFires.html
Graph by meteorologist Anthony Watts

It is easy to make unjustified, alarmist climate change claims. We at Climate Realism, however, will continue to set the record straight.

UN Contradicts Its Own Data to Promote Weather Disaster Alarm