Prominent climate activist and meteorologist Eric Holthaus has admitted that climate change activism is not about climate science, but really about “justice.” Holthaus’ admission is merely the latest in a long line of ‘scientists’ and others admitting that leftist political radicalism is the true goal of the asserted climate crisis.

With a Tweet, Holthaus joined a long line of climate alarmists on the left now fully admitting that the climate “crisis” or “emergency” is not about the science after all. Tweeted Holthaus:

“The climate emergency isn’t about science, it’s about justice,” 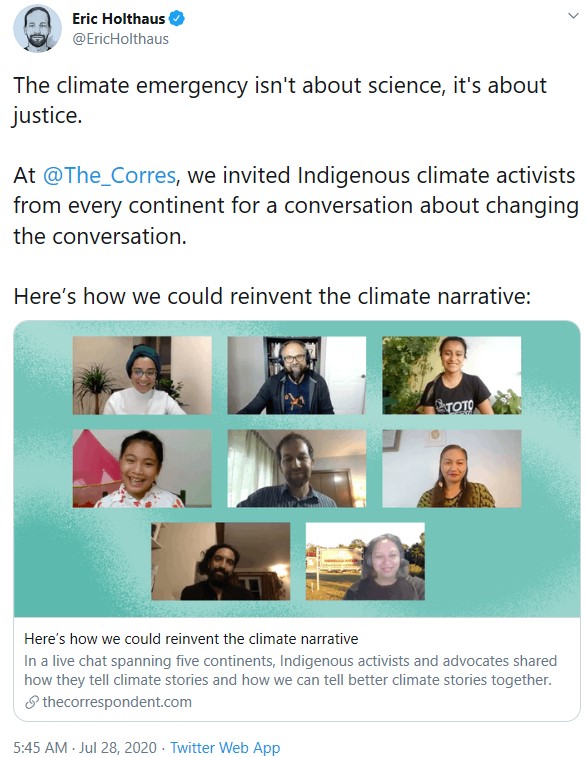 In Holthaus’ world, it is also “white supremacy” that also must be dismantled under the guise of fighting climate change. Kate Marvel, a climate activist who is also a NASA scientist made this outlandish claim on June 1st, 2020: “climate justice & racial justice are the same thing..we’ll never head off climate catastrophe w/o dismantling white supremacy.”

Congresswoman Alexandria Ocasio-Cortez has had some similar slips over the real reason behind the “Green New Deal.”

Also, former AOC campaign aide Waleed Shahid admitted the Green New Deal is a “proposal to redistribute wealth and power from the people on top to the people on the bottom.”

United Nations climate chief Christiana Figueres declared in 2012 that she is seeking a “centralized transformation” that is “going to make the life of everyone on the planet very different.”

Prominent teen climate activist Greta Thunberg ranted during the Madrid Climate Conference in 2019: “The climate crisis is not just about the environment. It is a crisis of human rights, of justice, and of political will. Colonial, racist, and patriarchal systems of oppression have created and fueled it. We need to dismantle them all. Our political leaders can no longer shirk their responsibilities.” You have to wonder who wrote that for her, as she was 16 years old at the time.

Clearly the howls of impending planetary doom and claims of a “climate emergency” are simply a vehicle to put politicians and bureaucrats in charge of our energy economy. Their agenda has lost any semblance of science, and is now nothing more than a tool for gaining control of our lives.