CBS News’ story covering of the Biden administration’s new U.S Climate Normals report says government data show the United States is warming at an unusually rapid rate due to human induced climate change, causing more frequent and severe extreme weather events. This story, as with the government report it is based upon, is long on alarm but short on facts. Data from the U.N. Intergovernmental Panel on Climate Change and the U.S. National Oceanic and Atmospheric Administration (NOAA) show temperatures in the United States aren’t rising at an unusually rapid rate. In addition, incidences of extreme weather events are neither more frequent nor more severe than in the past.

“Just a quick glance at the new U.S. Climate Normals maps published by the National Oceanic and Atmospheric Administration (NOAA) on Tuesday is enough for most climate scientists to say, ‘I told you so,’” writes CBS in an article, titled “NOAA’s “new normal” climate report is anything but normal.”

“While the new normals are just 10 years removed from the earlier set, the changes are still significant. In that time the nation has warmed an average of half a degree Fahrenheit,” CBS continues. “That may not sound like much, but small changes in the normals mean much larger changes in the extremes like extremes like heat waves, droughts, wildfires, floods and hurricanes.”

NOAA’s new report may claim temperatures are rising across the United States, and weather is getting more extreme, but its own data and data from the IPCC say otherwise.

Data from the IPCC and NOAA also demonstrate there has been no measurable increase in the number or severity of droughts, hurricanes or floods, since the early part of the 19th century. Also, data from the IPCC and NOAA show the incidences of heatwaves [see the figure below] and wildfires in the United States and globally have actually declined during the recent period of modest warming. 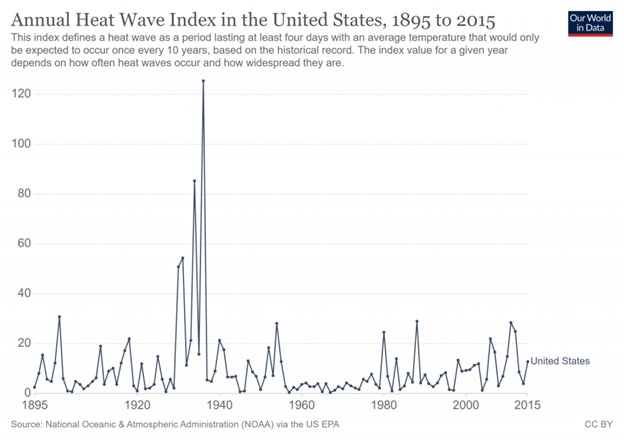 Had CBS compared the publicly available data against the alarming soundbites contained in the Biden administration’s new U.S. Climate Normals report, it could have easily discovered the report misrepresents what data show. A news organization committed to pursuing the truth, wherever it leads, would have looked beneath the surface of the report at the underlying data. Such an investigation would have revealed temperatures aren’t rising unnaturally, and weather extremes aren’t increasing.

That’s the good news CBS should have reported.

Thanks, Washington Times, For Presenting the Unalarming Facts About Global Warming

CO2 Levels Highest in 3.6 Million Years, Yet Temperatures Are Not...