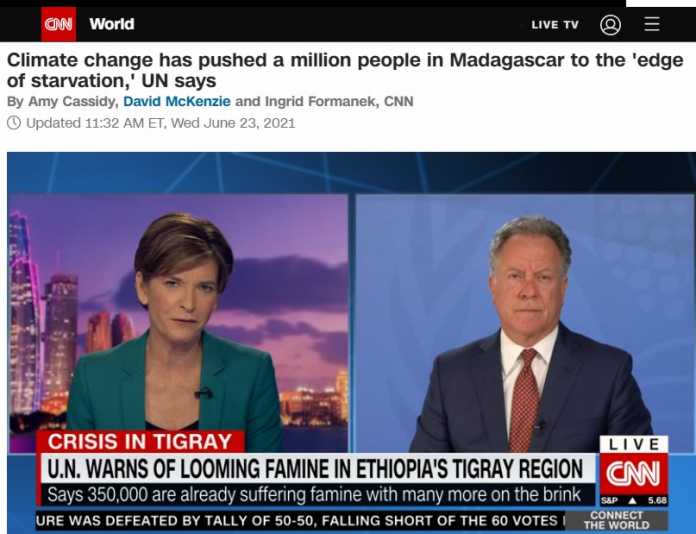 A recent search of Google news for the term “climate change’ turns up a number of stories in the mainstream media promoting the United Nations (UN) World Food Programme saying climate change is causing a drought in Madagascar that threatens more than 1 million people with starvation.

Linking climate change to a temporary weather event, which this drought is, equates to a false comparison. Also, the U.N.’s own data show Madagascar has been setting records in recent decades for crop production, so any food supply shortages are due to political or economic factors not declining crop production.

A story titled “Climate change has pushed a million people in Madagascar to the ‘edge of starvation,’ UN says,” by CNN is typical of the mainstream media’s uncritical coverage of the UN’s claims.

“Climate change is the driving force of a developing food crisis in southern Madagascar, the UN’s World Food Programme (WFP) has warned,” writes CNN. “The African island has been plagued with back-to-back droughts — its worst in four decades — which have pushed 1.14 million people ‘right to the very edge of starvation,’ said WFP executive director David Beasley in a news release Wednesday.”

The UN and CNN should check their premises and data. History shows back to back droughts are not unprecedented in Madagascar’s history. Indeed, CNN’s own coverage notes the current drought is the worst in forty years. Forty years ago, during Madagascar’s last major drought, scientists were warning of a coming ice age, not global warming.

It may be true that some people in Madagascar face potential starvation, but, contrary to UN Food Programme’s claim’s it can’t be due to more than a very recent decline in food supplies, because data from the UN’s Food and Agriculture Organization, show Madagascar’s food production has set repeated records since 1980, as seen in Figure 1 below.

Rice, cassava, and sweet potatoes are three of Madagascar’s staple crops. Each have set multiple records for production over the past few decades. Between 1980 and 2019, the last year for which the FAO has records for Madagascar:

Madagascar’s current drought is hardly unique and as dire as the present food shortage its people face may be, there is no evidence supposed human caused climate change is to blame. Indeed, during the era of global warming, Madagascar’s food production, like food production for the world as a whole, has increased significantly. Research shows at least part of the recent increase in food production is due to the fertilization effect from increased levels of carbon dioxide in the atmosphere from human fossil fuel use.

In a fervor to link the current drought and associated food shortages to climate change, the UN and CNN forgot a basic fact, weather is not climate and temporary weather conditions, such as back to back drought years, don’t necessarily reflect a changing climate. The UN Food Programme should check its own data before it promotes climate alarm to the media. Also, media outlets, like CNN, should be more skeptical of alarming climate change related claims about drought and food production, which readily available data refute.