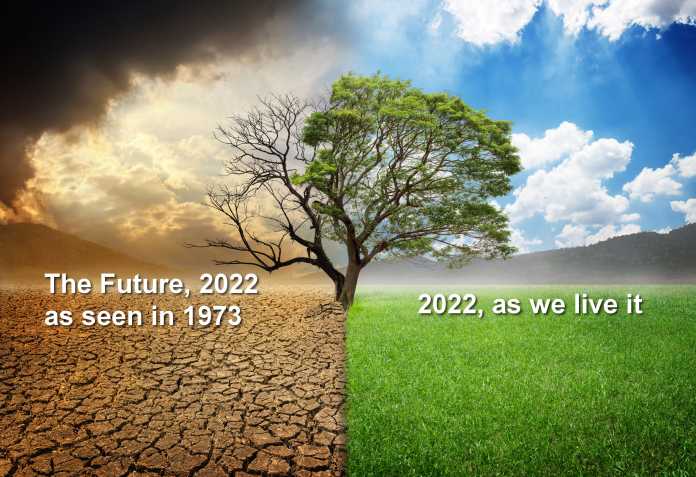 It’s the year 2022. Cumulative effects of overpopulation, pollution, and a “climate catastrophe” are causing severe worldwide shortages of food, water, and housing. Scientists confirm oceanographic reports saying the oceans are dying. The food chain is disrupted. Food is becoming scarce, and heat waves have become year-round events thanks to climate change aka “global warming.”

Homeless people are everywhere; only half the workforce is employed while the other half is barely making it. Many people are illiterate and few factories are producing new goods.

The homes of the elite are barricaded, with private security. Only the elite can afford air conditioning. Strawberries are now a delicacy at $75 a quart. The situation with food has gotten so bad that people are being harvested off the streets and “recycled protein” is being distributed to the population.

The world does face high inflation and shortages. In America, these are partly the result of two decades of policies substituting ever more intermittent sources of electric power for reliable fossil fuels and nuclear power onto the electric grid, and, more recently, the Biden administration’s limits on fossil fuel production.

Despite this, the worst of Soylent Green’s vision of the future is still far from coming to pass. Most importantly, the climate itself is not a catastrophe when you look at real-world data.

As seen in figures 1A and 1B below, March 2022 global temperatures measured by satellite are 0.27°F (0.15°C) and U.S. temperature measured by the U.S. Climate Reference Network, is just 0.38°F (0.21°C) above average; nearly undetectable fractions of a degree, with little change measured in the U.S. in 17 years.

And when we look at other real-word data, such as crop production and lives lost to non-optimal temperatures, we find things are even less like the predictions of the movie for 2022. Indeed, as shown in dozens of articles on Climate Realism, there is less hunger and fewer lives lost to extreme heat or cold than ever throughout history.

Global Crop production is actually up significantly according to the U.N. Food and Agriculture Organization. The Earth has actually become greener according to NASA, thanks to increased carbon dioxide in the atmosphere. Also, as seen in Figure 2, air pollution is down 50% or more since 1990 according to the Environmental Protection Agency.

The EPA added this note to their graph:

“During this same period, the U.S. economy continued to grow, Americans drove more miles, and population and energy use increased.”

In 1973, Soylent Green forecasted a “climate catastrophe” and a grim future for 2022 that clearly hasn’t happened. The high energy prices and the shortages of food and other goods we are currently experiencing are self-inflicted. Runaway inflation and restrictive energy policies enforced by the Biden administration are the real catastrophes limiting America’s bright future, today.