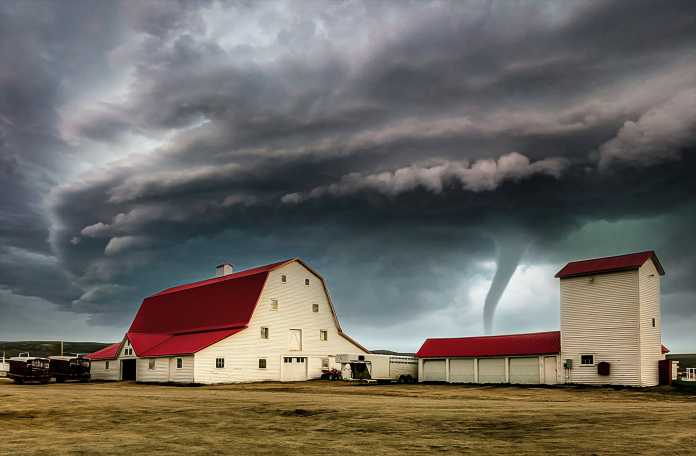 A recent article by a meteorologist writing for WDSU New Orleans, “Rising tornado numbers linked to climate change, study says,” makes the erroneous claim that climate change is causing more tornadoes in the southeastern United States. In reality, data show overall tornado occurrences nationwide are likely trending downwards as the planet modestly warms. The writer of the article appears to have misrepresented or misunderstood tornado research.

This is a poor argument. As a matter of logic, if the number of tornadoes in Tornado Alley decrease, as some research suggests, then the percentage of deaths by region would be expected to shift, as well.

After misrepresenting NOAA’s findings McWilliams referenced another report, writing, “A 2016 study from Purdue University says that climate change is linked to this increase in tornado activity,” and describes the results of the study, which found an eastward bias for tornado occurrence over time.

In the Purdue news release linked in the article, the study’s authors make far more modest, scientifically circumspect claims. The researchers forthrightly state more research is needed before they could definitively point to climate change as the culprit.

Data showed a notable decrease in both annual counts and tornado days in the traditional “tornado alley” of the central plains, aided by declines in summer and autumn. However, annual values were sustained in the southeast with some increase in “Dixie alley” due in part to substantial autumn seasons increases from Mississippi to Indiana, Agee said.

Severe tornadoes are decreasing nationally, contrary to alarmist claims, a fact NOAA has recently tried to hide. Climate Realism has covered this several times, including here, here, and here, for example.

As the NOAA Tornado Climatology and Data page explains:

Got that! Better detection of tracking of weak tornadoes, not more tornadoes, are responsible for the seeming increase in tornadoes overall.

When Climate at a Glance: Tornadoes analyzed extreme tornadoes (EF3+), shown in the Figure below, which would have been harder to miss in the past, it found a notable decline.

Tornadoes are weather events, and cannot be conclusively linked to a changing climate. When presented the question “Does climate change cause tornadoes,” NOAA’s tornado research FAQ compiled by Roger Edwards responds with a solid “No,” and goes on to explain that “Climate models cannot resolve tornadoes or individual thunderstorms.”

Even the VORTEX Southeast page linked by McWilliams rejects his premise, and goes into detail about the reasons why tornado outbreaks in the Southeast seem to be worse than in other regions.

From their home page:

For example, tornadoes in the Southeast occur in a region often characterized by hills and trees which reduce visibility of the horizon. They are also more likely to occur at night, in fast-moving storms, and earlier in the year compared to other parts of the country. Furthermore, vulnerability is increased by unique socioeconomic factors, which VORTEX-Southeast research has shown include inadequate shelter, housing type, and larger population density relative to other tornado-prone areas in the U.S.

The real problem for the southeast, especially Mississippi, which in fairness McWilliams did devote the second half of his article to, is poor infrastructure and a larger, more dense population with a lot of people living in mobile homes. This combination of dense population and fragile infrastructure offers more, more vulnerable, targets for tornado damage.

As a meteorologist, McWilliams should have recognized this, and been more honest in his reporting on tornado occurrences in the southeast. It seems before sitting down to write, McWilliams failed to do the research necessary to provide a balanced, fully informed article on tornado trends in the Southeastern United States. Perhaps that was intentional, since only a misrepresentation of the evidence can generate alarming claims that climate change is causing more tornadoes.