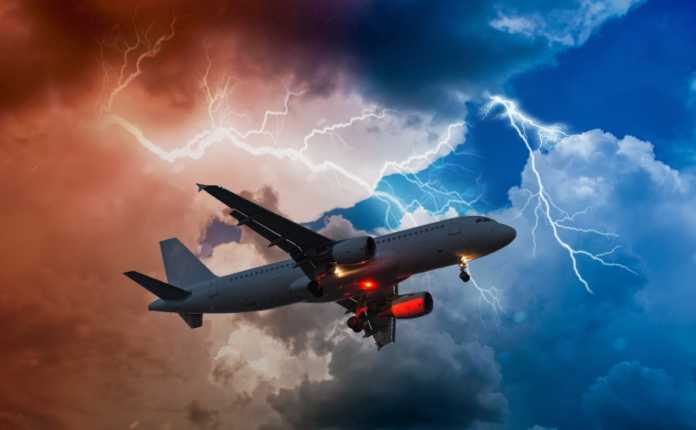 These days, the media will try to link nearly anything to climate change. As an example CNN ran a story, titled “Why air turbulence could be about to get a whole lot worse” by Jacopo Prisco, asserting, without providing evidence, that climate change will cause fights to be more dangerous. This is false. No data exists which indicates climate change is worsening the turbulence confronted by pilots daily.

(CNN) – Riding in an airplane could become bumpier in the future.

According to U.K. researchers, climate change is modifying turbulence and it may increase by two- or three-fold worldwide starting in 2050.

The Federal Aviation Administration reported turbulence is the top cause of injuries to passengers and staff in non-fatal accidents.

Turbulence is in fact a top cause of airline injuries. Fortunately there is no real-world data showing that turbulence is being exacerbated by climate change.

A 2021 report by the International Civil Aviation Organization (ICAO) plotted accident data related to turbulence and found no statistically significant increase in 30 years of data since 1989. See Figure 1 below:

If in fact turbulence was on the increase due to climate change as CNN claims, there would be a clear increase demonstrated in the graph. Instead, the values of turbulence related aircraft accidents have held steady since about 1995 as seen in Figure 1.

Figure 2 illustrates data from the ICAO showing the number of passengers carried up until the 2020 Covid 19 pandemic.

Given that air travel volume has been exponentially increasing, all things being equal, if turbulence were worsening, reported turbulence related injuries should also be expected to have sharply increased, but they have not.

This suggests that better safety measures and better weather detection and reporting have played significant roles in reducing turbulence related aircraft accidents and injuries. From the 2021 ICAO report:

“Pilot reports of turbulence conditions are a tremendous help to both pilots and forecasters to predict and avoid hazardous turbulence and subsequent injuries,” said NTSB Acting Chairman Bruce Landsberg. “The majority of injuries occurred below 20,000 feet in the vicinity of thunderstorms so it’s critically important for both passengers and flight attendants to be seated with their seat belts fastened in those conditions.”

The report noted that in recent years flight attendants accounted for nearly 80 percent of turbulence-related injuries because their jobs frequently require them to be up and about without the safety benefit of a seat belt.

Weather radar has significantly improved in 30 years, both on the ground and in aircraft, allowing pilots to better avoid thunderstorms. The Federal Aviation Administration (FAA) has implemented turbulence detection systems at airports that can spot a wide variety of thunderstorm related turbulence events, making takeoffs and landings even safer. No trend in data exists from this system showing an increase in turbulence.

The study also highlighted a new product, a turbulence nowcast, that combines numerous data sources to produce forecasts that are updated every 15 minutes – providing air carriers, all users of the National Airspace System and the air traffic controllers who support them – timely and critical safety information about locations and severity of potential turbulence. The turbulence nowcast is not yet widely used so the NTSB recommended the FAA and the NWS work together to fully implement its adoption and use in the national airspace system.

The public can now even benefit from turbulence forecasts ahead of their flight on a website called turbli.com. Forecasts or not, the FAA reports the easiest way to keep yourself safe from turbulence during a flight is to keep your seatbelt fastened.

Contrast all of those real-world improvements and common-sense advice with the basis of the study on turbulence and climate change as reported by CNN:

About 65,000 aircraft suffer moderate turbulence every year in the US, and about 5,500 run into severe turbulence. These numbers, however, might be destined to grow. Williams believes that climate change is modifying turbulence, and started studying the subject in 2013. “We ran some computer simulations and found that severe turbulence could double or triple in the coming decades,” he says.

So, the forecast is not from actual data, but model simulations.

As we have noted time and again on Climate Realism, model output is not data, and the easily found real-world data on turbulence related accidents and injuries shows no increase.