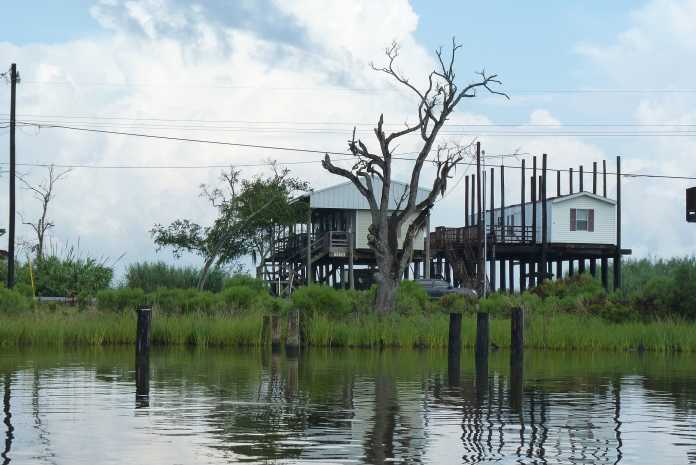 A CNN broadcast about coastal losses due to land sublimation and sea level rise claims that climate change is causing a refugee crisis in coastal communities. This claim is misleading. Regardless of anthropogenic climate change, coastlines are a volatile environment to live in, and decades of development on the coast of Louisiana and government flood control efforts, not climate change, are behind the coastal erosion creating refugees there.

A short CNN segment, titled “Island could lose 98% of land from climate change. See how residents are responding,” describes the state of Louisiana’s efforts to relocate the community Isle de Jean Charles, Louisiana, which is projected to lose most of its livable landmass in the coming years.

Interviewed for the broadcast, Louisiana Gov. John Bel Edwards said this is the “first project of its kind in our nation’s history. These are basically climate change refugees,” discussing a federal resettlement grant that is aiding in the relocation of residents.

On average, global sea level rise has been relatively consistent since the earth exited the last ice age, as shown in Climate at a Glance: Sea Level Rise. Global sea level has been rising at a pace of about 1.2 inches per decade since 1993. Sea levels, however are falling or rising at different rates in different parts of the world, based on local geography, human development, and depositional environments.

Climate Realism has discussed the various causes of rising seas, here, here, and here, for example. Especially on point is a recent post on Louisiana’s coastline. Louisiana’s coast has the highest rate of “sea level rise” in the country. However this has less to do with actual ocean levels increasing and more to do with land sinking.

Louisiana, and especially the region around Grand Isle, suffers from a substantial loss of land, and resulting in a measured accelerated rate of sea level rise compared to coastal regions only a few hundred miles away. The two figures below compare tide gauge data at Grand Isle, Louisiana, and nearby Pensacola, Florida.

Many canals have been cut through Louisiana’s coastal swamplands to facilitate oil and gas pipelines, as well as make paths for shipping. One in particular, the Houma Navigation Canal, has been causing salinity changes and subsequent wetland degradation—including coastal land erosion and subsidence—in Terrebonne Parish, where Isle de Jean Charles is located.

The large canal allows saltwater to penetrate deeper into the coastal marshes than it would normally, killing aquatic plants that are not salt tolerant enough to handle the influx. Native plants help to maintain sediment levels in the marshes, and when they die off, land subsidence gets worse.

Also, insatiable foreign rodents, nutria, which were introduced to the region as a source for the fur trade, have been destroying coastal vegetation at a rapid rate since their introduction. In addition, civil engineering projects to control the Mississippi River Delta’s flooding, have reduce the amount of land-building sediment that has historically replenished coastal areas and barrier islands in Louisiana.

Not every coastal problem in Louisiana is man-made. As a river delta ecosystem, south Louisiana is much more prone to rapid land changes as natural waterways shift. River delta regions have lower elevations naturally, and suffer from heavy periodic flooding. It is already an unstable environment, and will take thoughtful future planning to balance the natural and human-caused issues that plague the state.

While humans are certainly playing a role in coastal Louisiana subsidence problems, human caused climate change is at best a marginal factor. Gov. Edwards knows this to be the case, having  recently broken ground on a new lock complex meant to stop saltwater invasion of the Houma Canal, and having visited other new floodgate projects as they were completed. But linking the land loss to climate change is more likely to bring publicity, like that given by CNN’s report, and federal dollars than crediting Isle de Jean Charles’ decline to the true culprit, a mismanaged canal system and development. Publicity, money, and government control are what climate alarmism is all about.