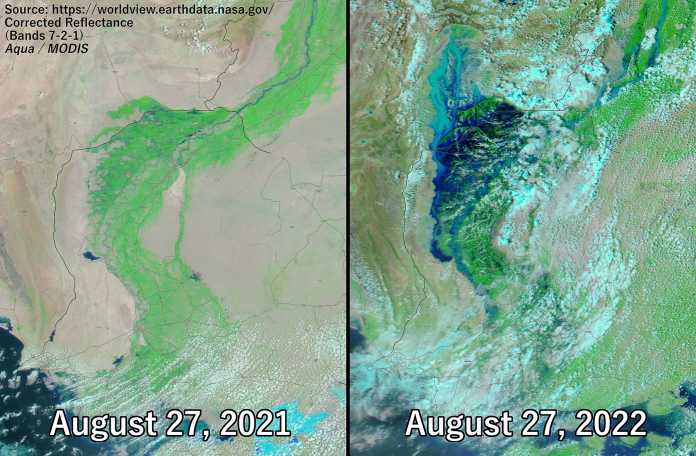 Climate alarmism and journalistic bias have reached new heights of misleading hype on the catastrophic flooding in Pakistan which is reported to have received more than three times its annual rainfall in August.

The question is, of course, if human-induced climate change has had anything to do with making the floods more dramatic that could reasonably have been expected in the absence of human influences, i.e, as a result of a natural disaster that have been hitting the Indian subcontinent for centuries.

The answer (as given in the small print) by climate scientists at the world weather attribution project is ‘no’ – although it is quite obvious that they, the BBC and much of the news media, don’t like this answer. As a result, they go all around the scientific and journalistic houses to give the contrary impression. When the case they want to make cannot be made they claim that the picture is “complex.” How can scientists think that this sort of thing is acceptable?

The BBC report says that “global warming is likely to have played a role in then devastating floods that hist Pakistan, say scientists.” On the face of it “likely” might, or might not, mean a better than 50% chance, but in this case it doesn’t. Far from it.

Consider the revealing statement by Friederike Otto of Imperial College London, one of the World Weather Attribution team,

“Our evidence suggests that climate change played an important role in the event, although our analysis doesn’t allow us to quantify how big the role was.”

So now we have “important role,” added to “likely!” Are you being nudged in the right direction yet? Then we have the admission they don’t know how big this “important role” is? And it gets even stupider.

The world weather attribution website analysis has as its main conclusion the rather unsurprising conclusion that the flooding occurred as a direct consequence of the extreme monsoon rainfall. Then it long-windedly goes on to explain why climate models are no good when it comes to analysing the event or its connection to climate change, concluding that the existence of natural variability means it is actually

“infeasible to quantify the overall role of human-induced climate change.”

“What we saw in Pakistan is exactly what climate projections have been predicting for years.”

But then they admit the event is well within the range of historical natural variability pointing out that 2022 was the wettest years since err…1961! And let’s not forget that only a few years ago climate scientists claimed that “our analysis found that the summer monsoon rainfall is decreasing over central South Asia – from south of Pakistan through central India to Bangladesh.”

So the real story is, “There is no solid evidence climate change had anything to do with Pakistan’s flooding” — in sharp contrast to the BBC’s headline of “Climate Change: Pakistani Floods ‘likely’ made worse by flooding.”

How can the scientific community, and those interested in the subtleties and realities of climate communication justify being so misleading? How can journalists stand to distort scientific ambiguity using faux certainty to support a climate narrative abandoning any sense of journalistic rigour?