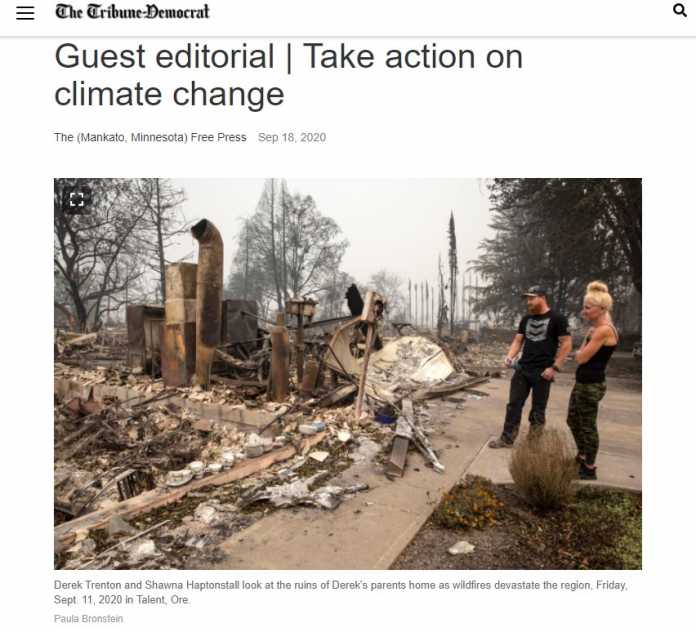 This is part1 of a two part response, see part2 here

Almost every factual claim Paula Bronstein makes in her guest editorial, titled, “Take action on climate change,” which ran in the Mankato, Minnesota Free Press and the Johnstown Tribune-Democrat, is wrong.

Limiting my responses to her false claims concerning record heat, Bronstein asserts, “California had its hottest August on record including record-setting heat in Death Valley.”

Contrary to Bronstein’s claims, California’s Death Valley did not set records for heat this year.

Although National Weather Service in Las Vegas, Nevada sent out a Tweet highlighting a new maximum daily temperature of 130°F in Death Valley, for August 16, this was not the record for Death Valley in the summer. In 1913, over 100 years of “global warming” ago, Death Valley’s official weather station at Greenland Ranch hit an all-time record of 134°F, and also hit 130°F or higher three times that July. In 1913, CO2 in our atmosphere was about 43 percent lower than today at 290 parts per million in 1913 compared to the “Climate crisis” level of 414 PPM today, yet temperatures were regularly as high, or higher, than the single day in August 2020.

Nor is the Western United States or the United States as a whole experiencing more frequent or severe heatwaves, according to government data.

Indeed, a recent summary of heatwave records, Climate at a Glance: U.S. Heatwaves, cites data from the National Oceanic and Atmospheric Administration (NOAA) which shows in recent decades heat waves have been far less frequent and severe than was the case during the 1930s – nearly 100 years of global warming ago (See figure 1 above).

Data show the majority of each state’s all-time high temperature records were set during the first half of the 20th, and the most accurate nationwide temperature station network, implemented in 2005, shows no sustained increase in daily high temperatures in the United States since at least 2005.

Bronstein’s record heat claims are false. Time for her to follow the science.