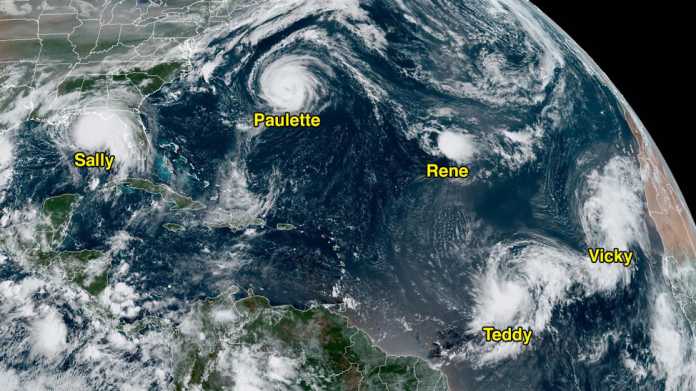 Above: GeoColor visible satellite image of an Atlantic Ocean packed with five tropical cyclones at 10:20 a.m. EDT Monday, September 14, 2020. Images like this were used by the media to claim climate change was making hurricanes worse in 2020. (Image credit: RAMMB/CIRA/Colorado State University)

Despite the National Hurricane Center reporting a record-breaking Atlantic hurricane season, and contrary to the breathless climate blame-game reporting that followed, the number of major landfalling U.S. hurricanes — the most reliable hurricane trend indicator — has not increased since 1900. The year 2020 was no exception, as just one major hurricane made landfall in the United States.

Throughout 2020, we were told by the media that the unprecedented numbers of named Atlantic storms in 2020 showed how “climate change” makes ever more hurricanes. But other real-world data say otherwise. When it comes to the United States, 2020 wasn’t an unusual year in the record, as seen in Figure1 below.

Figure 1 was composed by Dr. Bjorn Lomborg in an update of his peer-reviewed paper Welfare in the 21st century: Increasing development, reducing inequality, the impact of climate change, and the cost of climate policies , posted on Facebook on January 3rd, 2021.

Notice the complete absence of major hurricane landfalls in the U.S. from 2006 through 2016. That had never happened before in the U.S. hurricane record.

Meteorologist Dr. Ryan Maue charts global tropical cyclone Accumulated Cyclone Energy (ACE), a measure of global hurricane power, and cites a slight downward trend over the past 30-years, as seen in Figure 2 below.

“2020 finished up well below last 30-year average [because] of the (intensity) suppression in the Pacific due to La Niña. Pretty surprising scientific result considering the narrative.”

The United Nations Intergovernmental Panel on Climate Change (IPCC) predicts in its most recent report that global warming, aka “climate change,” will mean stronger but fewer hurricanes. See page 178 of the report here: https://ipcc.ch/sr15/.

The National Oceanic and Atmospheric Administration (NOAA) similarly finds that global warming will increase the worst hurricanes by a mere 5%, while reducing the frequency of all hurricanes by 25%. The NOAA report is available here: https://www.gfdl.noaa.gov/global-warming-and-hurricanes/.

There is no way we can distinguish a 5% increase any time soon. NOAA says it will take many decades.

Perhaps more importantly, NOAA acknowledges it has yet to find any detectable climate-change impact on Atlantic Ocean hurricanes, which includes U.S. hurricanes. As NOAA points out:

“Therefore, we conclude that it is premature to conclude with high confidence that increasing atmospheric greenhouse gas concentrations from human activities have had a detectable impact on Atlantic basin hurricane activity.”

You can see the impact for all US landfalling hurricanes in Figure 3 below, the numbers  haven’t increased beyond previous peak years.

It seems very clear that the Earth simply isn’t cooperating with the claims made by climate alarmists when it comes to hurricanes.

Yale Climate Connections Should Go Back to School for Equating a...