Despite the constant drumbeat from climate alarmists that the Earth is getting warmer, and that ice in Greenland is melting due to warmer temperatures and will cause sea level rise, real-world data says otherwise.

The February 2021 temperature data for Iceland and Greenland are now available from the Japan Meteorological Agency (JMA), which means the latest meteorological December/January/February winter mean temperature can be computed.

Icelandic winters have cooled since 2001

We plotted the JMA data for three stations (the ones with sufficient data) in Iceland. Result: no warming over the past 18 winters! 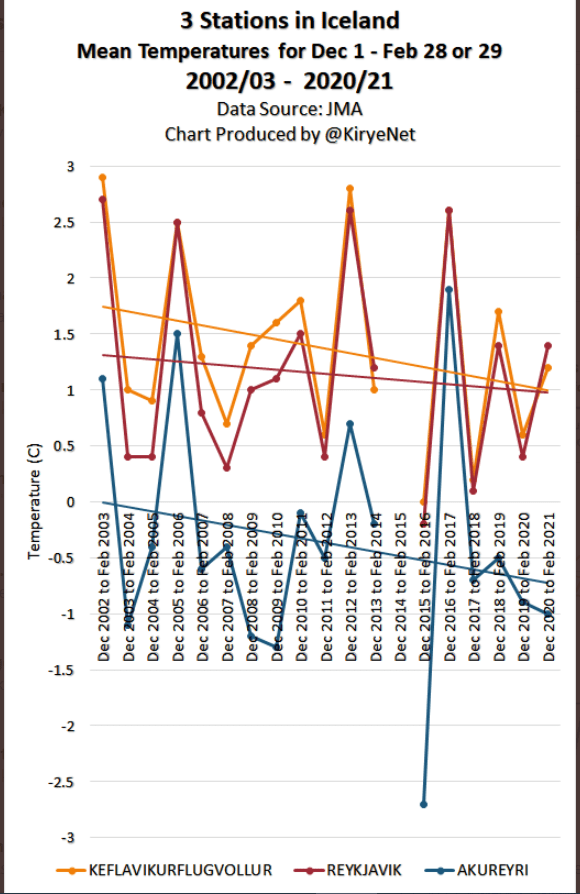 As you’ll notice, some winter data for Iceland are missing, but there’s enough to show us that winters there have been cooling, and not warming.

Earlier this year we plotted the annual data for these three Icelandic stations, and found 2 have cooled and the third was stable. 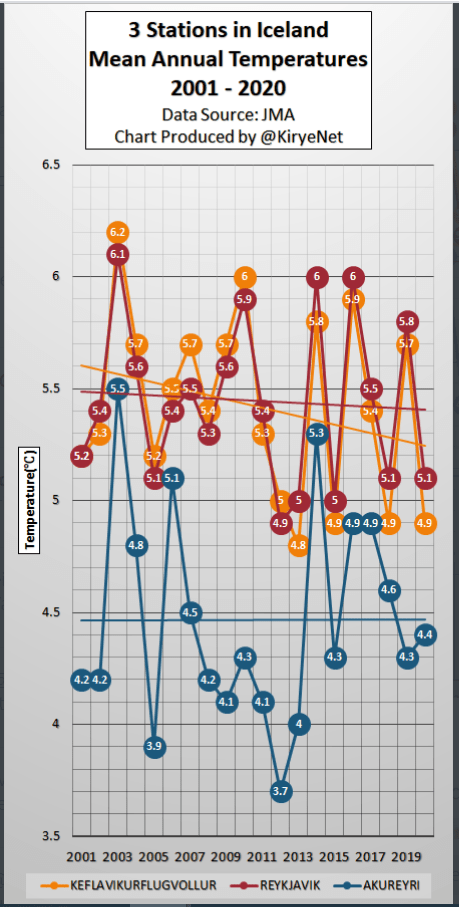 Obviously there has not been any warming at this North Atlantic island since the start of the century. The alarmists are screaming about nothing.

Greenland stations have cooled off

Next we go to Greenland, What follows are plots of JMA ANNUAL mean data for 6 stations on Greenland. A couple of the stations have data gaps, but they still can give us a pretty good idea as to what’s going on.

In Greenland as well we find no real warming going on. It’s all been pretty stable since 2001.

And what about winters in Greenland? The six stations are plotted as follows:

Once again the JMA data for Greenland is somewhat fragmented, but they certainly do a better job than Michael Mann’s tree rings. Altogether, there’s been nothing unusual happening up in Greenland during the winter this century.

Climate alarmists and media enablers of the climate alarm would do a much better job of informing the public if they actually looked at the data first, because the data is the only thing that tells the true story.

Reposted from the NoTricksZone