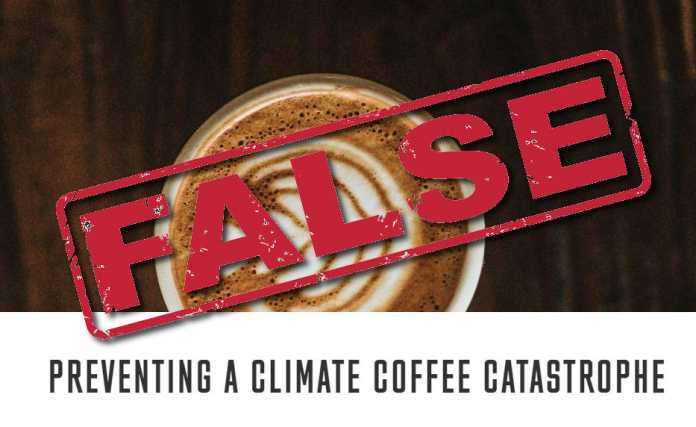 Among the top stories promoted by Google News today is an article in the online foreign policy publication, Inkstick Media, titled “Preventing a Climate Coffee Catastrophe.” The article asserts climate change is threatening the collapse of the coffee industry. Real-world data shows this is false. As with almost every agricultural crop, United Nations Food and Agriculture Organization data show coffee production has set multiple new records globally and in country after country, during the modest warming of the past half-century.

“[A]s people sip their Arabica with almond milk, the coffee industry teeters on the brink of collapse as it struggles with the ever-growing risk of climate change,” writes Inkstick Media.

This is false. Rather than struggling, the U.N.’s Food and Agriculture Organization (FAO) reports between 1988 and 2019, world coffee production has steadily increased, even while the Earth has modestly warmed at the same time. See the red line in Figure 1 below.

Interestingly, between June 1988, when NASA’s James Hansen famously declared humans were causing global warming, and 2019 (the latest available data), world coffee production increased by more than 77 percent, from 5.6 million tons in 1988 to more than 10 million tons in 2019.

“Take Colombia, for example. Colombia is one of the world’s top coffee-growing countries [the world’s 3rd largest coffee producer], accounting for US$2.64 billion per year, or around 16 percent of the country’s GDP. The majority of Colombian coffee farms are modest in size and family owned. Climate change impacts these farmers at alarming rates and threatens their livelihoods as new weather patterns, ever-changing season lengths and severe weather events become commonplace.”

Most Columbian coffee producers would likely be surprised to discover they are struggling. FAO data show between 1988 and 2019, Columbia’s coffee crop production increased 25 percent, even as the amount of land devoted to coffee production fell by 10 percent.

What is true of for coffee farmers in Columbia, is true for coffee producers in the remaining four of the top five coffee producing countries, as well. Between 1988 and 2019, FAO data show:

Sorry, Google News and Inkstick Media, but there is no climate/coffee crisis. Coffee production keeps growing as the Earth modestly warms.