Last week Climate Realism published a story, titled “Heatwave Reporting Illustrates How Science Has Been Corrupted with Climate Groupthink,” demonstrating climate change had no impact on the recent heatwave in the Northwest. Now comes a story from a researcher from the other side of the political spectrum, titled “Was Global Warming The Cause of the Great Northwest Heatwave? Science Says No,” confirming climate change is not implicated in the recent heat wave.

The second article comes from Professor Cliff Mass, who is described on the University of Washington (UW) website as “…a meteorologist who specializes in weather prediction and modeling. A particular emphasis of his research has been the weather features of the western United States. The Seattle Times has called him the “closest thing to a celebrity scientist in Seattle”.

A person of knowledge and respect in the field of climate analysis, from the left-leaning city of Seattle no less, says science does not support claims like those made by media, President Biden, and Washington governor Jay Inslee: 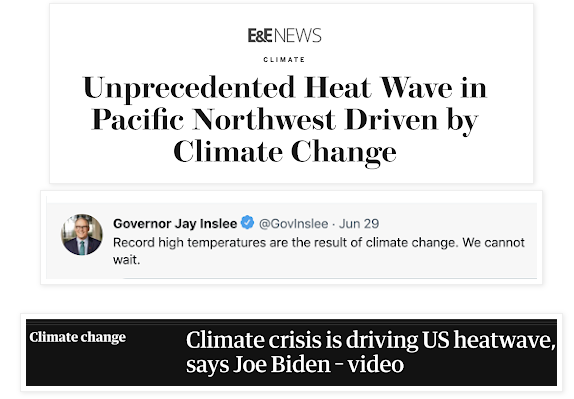 For those who routinely shout, “Follow the science!,” Mass brings the science, writing, “… if you are going to truly understand the science and the situation. Superficial, hand-waving arguments will not allow you to comprehend the truth, particularly when so many ‘facts’ communicated in the media and among activists are inconsistent with the best science.”

His lengthy essay may be difficult for people who aren’t versed in meteorology like I am to fully understand. However, Mass helpfully provides this plain-language synopsis:

Society needs accurate information in order to make crucial environmental decisions. Unfortunately, there has been a substantial amount of miscommunication and unscientific handwaving about the recent Northwest heatwave, and this blog post uses rigorous science to set the record straight. … [I]t is shown that global warming only contributed a small about (1-2F) of the 30-40F heatwave and that proposed global warming amplification mechanisms (e.g., droughts, enhanced ridging/high pressure) cannot explain the severe heat event. It is shown that high-resolution climate models do not produce more extreme high temperatures under the modest global warming of the past several decades and that global warming may even work against extreme warming in our region. Importantly, this blog demonstrates that there is no trend towards more high-temperature records. Finally, the communication of exaggerated and unfounded claims by the media, some politicians, and several activists are discussed.

Regardless of the politics, Mass pulls no punches, which is why, even though he and I are on opposite sides of the political spectrum, he asked me to republish his essay on wattsupwiththat.com.

One of the most damning statements Mass makes is this:

So if greenhouse gas warming over Washington State is 1-2F, how can greenhouse gases cause a huge heatwave that is ten to twenty times greater? A very good question. Such a ten-times amplification of the global warming signal would require powerful positive feedbacks, which I will demonstrate below are simply not evident. A global warming origin of increased temperature extremes would also be evident in long-term trends of extreme temperatures, but such trends do not exist.

Mass cites a model run [Figure 1] produced by UW graduate student Robert Conrick, who re-ran the UW’s Weather Research and Forecasting model, inputting three times the amount of the actual soil moisture into the model. Even with substantially more moisture available, as shown in the comparative figures below, the heat wave did not go away.

Commenting on the results Mass writes:

Even with “biblical” moistening of the soil over the entire domain, temperatures over western Washington and British Columbia, where the heatwave was most severe, hardly changed, cooling by about 1 degrees C (about 2F) or less.

But there is something else that essentially puts the silver stake into the heart of the unfounded global warming “drought” theory of this event.

Specifically, there is no observed trend towards “drought” over the Pacific Northwest as demanded by the proposed global warming origin of this event.

Below [Figure 2] is the observed annual precipitation over Washington State since 1900. Our region is NOT getting drier. If anything, precipitation has increased a slight amount.

Clearly there’s no trend, no “climate change” driver. There is, however, a lot of what Mass refers to as the “Politicization and Miscommunication of Science.”

The inaccurate information being distributed about the origins of this heatwave is very disturbing.

Some of this is being done out of ignorance or laziness, but a few individuals are deceiving the public deliberately. Science journalism is only a shadow of what it was decades past, and a number of scientists now see social activism as more important than the determination and communication of truth.

We are now making similar mistakes with global warming, with politically inspired misinformation slowing realistic and life-saving steps, such as thinning our forests and restoring natural fire, or proceeding rapidly with nuclear energy. … Global warming is an issue we can deal with, but only if truthful, factual, and science-based information is provided to decision-makers and the nation’s citizens.

They have put political agendas ahead of truth and we are all the worse for it.

Thank you, professor Mass for following the science, and, more importantly, thank you for breaking ranks and telling the truth about what science shows about the heatwave.