A news release sent to media yesterday via the science press channel known as Eurekalert has been getting coverage, but not for the right reason. Eurekalert’s release, titled “5 million deaths a year caused by global climate related abnormal temps,” implies researchers at Monash University are claiming global warming is causing excess deaths. In truth, the Monash University study confirms what other studies have consistently shown, cold temperatures contribute to far more deaths each year than warmer temperatures and temperature related deaths are declining.

Media outlets such as Bloomberg and The Guardian immediately pounced on Eurekalert’s headline, implying extreme heat caused by climate change was causing 5 million deaths each year. In fact, heat was only responsible for a small portion of those. 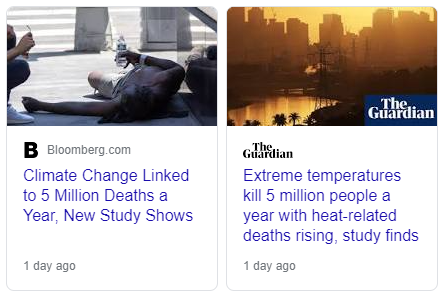 The headlines are lying by omission. The report makes clear the number of deaths linked to cold temperatures decreased by more than double the amount that deaths tied to hotter temperatures increased over the period of the study.

The study’s authors are touting it as the largest of its kind. Importantly, they found such a small increase in heat related deaths, that it could be considered statistically insignificant. Statistically significant or not, the Monash University press release clearly states,

“[i]mportantly, cold-related death decreased 0.51 per cent from 2000 to 2019, while heat-related death increased 0.21 per cent, leading to a reduction in net mortality due to cold and hot temperatures.”

This means the mainstream media outlets which added an alarmist editorial slant in their coverage of the report, missed the study’s most important take away: As the earth has modestly warmed, temperature related deaths have declined.

The table below provides some of the temperature related death numbers.

This study confirms what research previously published in The Lancet, the Southern Medical Journal, and other outlets, has consistently shown: Cold is the biggest temperature related killer, not heat.

Finally, it should be pointed out that every one of these deaths is related to a weather event, because there is no such thing as a “climate event”. Climate is an average of weather over a 30-year timescale. This study only covered 20 years.

Despite the false impression given by mainstream media headlines, the Monash study shows the modest warming we’ve seen over the last century has reduced overall mortality tied to temperatures by a small amount. This positive trend should continue if the earth keeps warming modestly. Sadly, fealty to the climate alarm myth seemingly prevents media outlets from reporting such good news. So much for accurately reporting the facts and following the science!