Heavy rainfall recently created damaging floods over British Columbia and Northwest Washington, with the town of Sumas, WA hit hard by floodwaters. It didn’t take long for ‘woke’ politicians and the media to start claiming that this event was the direct result of global warming aka “climate change.” Evidence shows this claim is baseless and false.

For example, Washington’s Governor Jay Inslee called the flooding an example of “a permanent state of attack by the forces of climate change.”   The New York Times claimed that flooding in Northwest Washington was caused by climate change saying “Vancouver Is Marooned by Flooding and Besieged Again by Climate Change.”

Similar false claims were found in the Washington Post and The Guardian newspapers.

The Sumas area is extraordinarily prone to flooding and has experienced flooding many times before.   And as I will demonstrate below, there is no evidence whatsoever that global warming caused the heavy rainfall associated with this event.

The town of Sumas is within the historical flood plain of the Fraser River, with an additional flooding threat from local rivers such as the Nooksack (see maps below from a 2005 report by Dr. Jacek Scibek and Dr. Diana Allen of Simon Fraser University)

Importantly there was a large historic lake near Sumas and Abbotsford (Sumas Lake) that was drained for use in agriculture.   In short, a low-lying, historically wet area that has always been prone to flooding.

Flooding is not a new visitor to the Sumas area, which has experienced flooding many times during the past century.   The streets of Sumas were similarly flooded in February 2020 (see below) 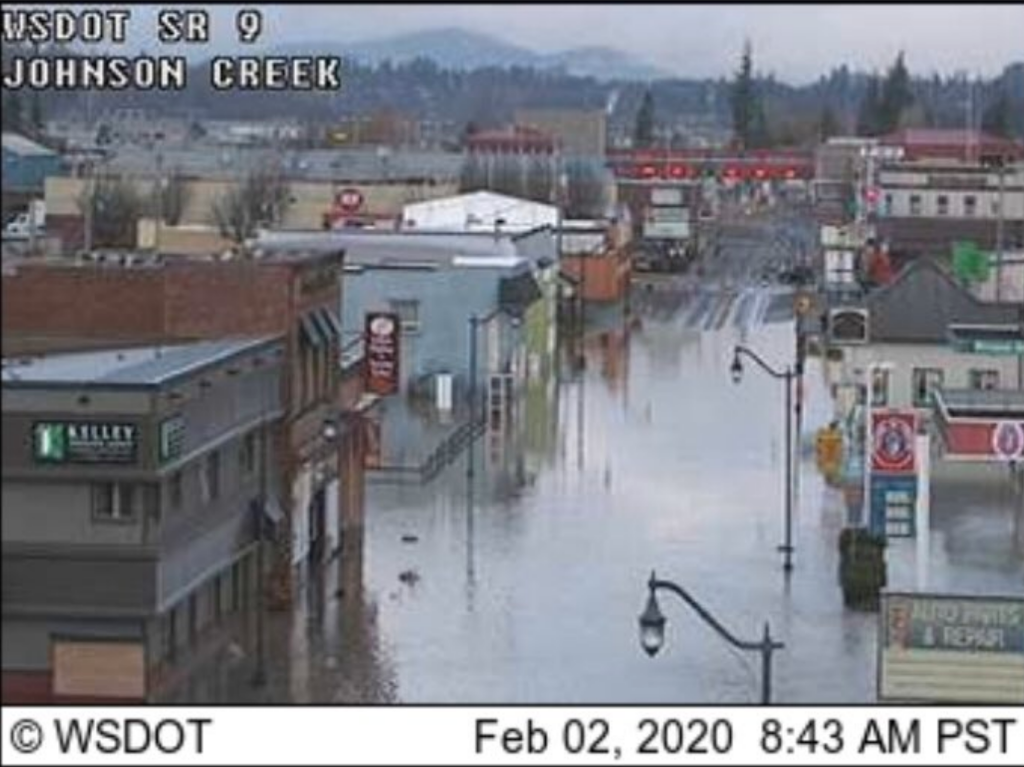 And there were many previous major floods, including those in 1990 and 1951, (seen in Table 1) to name only a few (see some more examples from the Whatcom County analysis of flooding events).  You build a town in a historical river delta in one of the wettest portions of North America, you can expect trouble.

To say that flooding in Sumas or the region is something new, unprecedented, or unique is simply not correct.  Those making such claims should have spent a little time examining historical floods of the region.

There has been a LOT of handwaving about the heavy precipitation during this event, claiming it was the result of global warming.  Or that it was greatly enhanced by global warming.

Yes, we had a major rainfall event, but to make a claim that global warming was the origin, it is necessary to demonstrate that there has been a progressive increase in heavy rain, something that would be a sign of a global warming origin.

Let’s look at the data.  Karin Bumbaco, Associate Washington State Climatologist, graciously provided me with plots of annual maximum 24-h rainfall at Bellingham, WA, and at the nearby Clearbrook official climatological observing site, with the latter having a very long record (see Figure 2 below).

There is NO HINT of a trend towards more extreme precipitation at either of these sites.  According to Karin, the big peak in the mid-1930s was from an error in putting two days of rainfall into one day.

Mass points out (bold his):

The real clincher that this was not part of a long-term climate trend comes in the form of direct evidence of a short term weather pattern directly targeting the Pacific Northwest, creating a localized heavy precipitation event.

The origin of this event was a moderate atmospheric river, in which a narrow plume of water vapor was forced upward by local mountains. See Figure 3.

If global warming was important, then one would look for above-normal sea surface temperatures along the atmospheric river’s path, which would provide additional moisture to the air.

Below are the sea surface temperature anomalies (differences from normal) for the period leading up and including the atmospheric river in question.

It was cooler than normal immediately off our coast and near normal for virtually the entire path of the atmospheric river event. With La Nina conditions, the water temperatures near the equator were BELOW normal.  No sign of a global warming contribution.

Objective data demonstrates that the flooding event in Washington and British Columbia was the result of a short-term weather event, not a long-term climate change.

The Media and politicians’ claims of recent flooding in Washington state and adjacent British Columbia were due to “climate change” are all wet.