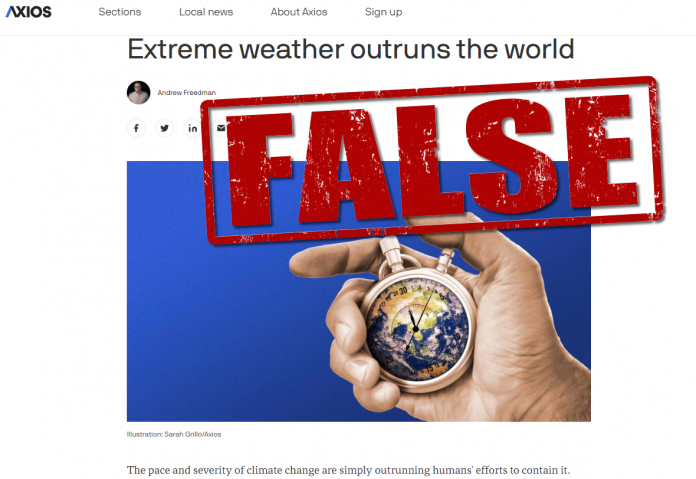 A search of Google News today for the term “climate change” turns up a story from Axios in which the author, Andrew Freedman, claims climate change, supposedly caused by humans, is making extreme weather more common. This is false. The 6th Assessment report from the Intergovernmental Panel on Climate Change (IPCC) definitively refutes the claim that weather is becoming more extreme.

“Extreme Weather Outruns the World,” is the title of an article on Axios.

“The pace and severity of climate change are simply outrunning humans’ efforts to contain it,” writes Axios. “‘It’s quite clear that for each additional 0.5°C of warming there is a clearly discernible and substantial increase in the frequency and intensity of extreme temperatures and extreme downpours,’ climate scientist Daniel Swain tells Axios.”

Axios would have served its readers better had it cited some evidence for the claim that climate change is making weather more extreme. Rather than quoting selected scientists, had Axios examined the best available data and the IPCC’s most recent report it would have publicized the fact that there is little evidence extreme weather has become more common during the recent period of modest warming.

As discussed in several Climate at a Glance topics, data shows floods, hurricanes, instances of extreme heat or cold, tornadoes, and wildfires have not increased over the past century, much less over the past 30 years.

The IPCC’s most recent report confirms it can find limited evidence most types of extreme weather have increased in number or intensity during the recent period of modest warming.

As detailed in a post by the University of Colorado’s Roger Pielke Jr,

“[I]t is simply incorrect to claim that on climate time scales the frequency or intensity of extreme weather and climate events has increased for: flooding, drought (meteorological or hydrological), tropical cyclones, winter storms, thunderstorms, tornadoes, hail, lightning or extreme winds (so, storms of any type)”.

Contrary to media reports which often conflate increased rainfall with increased flooding, AR6 makes clear the two phenomena are not necessarily associated. As Pielke points out, although the IPCC states “the frequency and intensity of heavy precipitation have likely increased at the global scale over a majority of land regions with good observational coverage,” it explicitly states “heavier rainfall does not always lead to greater flooding.” Regarding flooding, the IPCC writes, “Confidence about peak flow trends over past decades on the global scale is low, … [and] there is low confidence in the human influence on the changes in high river flows on the global scale.”

Although to the media a drought is a drought, the IPCC says otherwise, distinguishing four categories of drought: hydrological, meteorological, ecological, and agricultural. According to the IPCC, there is limited evidence climate change has increased the number, duration, or intensity of hydrological or meteorological droughts, and it has only medium confidence it has “contributed to changes in agricultural and ecological droughts and has led to an increase in the overall affected land area.”

Concerning wildfires, the IPCC reports “wildfire weather,” however that is defined, has increased. Yet, NASA satellites have since 1998 been measuring the amount of land burnt by wildfires and those objective measurements show that the total acreage burned by wildfires each year has declined by 24 percent since 1998.

Axios, like many corporate media outlets, has seemingly ceased to exercise journalistic integrity when reporting on climate change. Sadly, based on the fact that corporate media rarely retract alarming stories making false claims about climate change when they are shown to be wrong, media outlets like Axios also lack any semblance of shame for misreporting on the topic.

No single instance of extreme weather can be attributed to human caused climate change. Extreme weather has been common throughout the earth’s history, and real-world data does not show it is worsening.