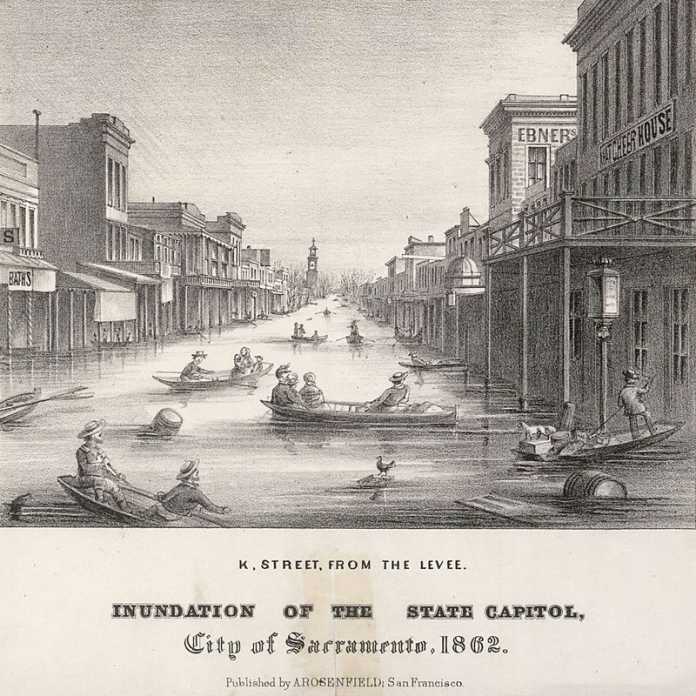 For those wondering about the recent heavy rains in the west, going from drought to deluge in a few short months, here’s some data and history to illustrate that it is nothing new, and it has nothing to do with the claims of a “climate change” influence.

Before the industrial revolution, electricity, eight lane highways, and gas-guzzling SUV’s, there was a 43-day rainstorm that began in December 1861 that put central and southern California underwater for up to six months.

The highest rainfall ever in California during recorded history likely occurred in January 1862, during the “Great Flood”. This was an atmospheric river event like we are experiencing now, but lasted several days, dumping 24.63 inches of rain in San Francisco, 66 inches in Los Angeles, leaving downtown Sacramento underwater.

According to the National Oceanic and Atmospheric Administration (NOAA):

The photos below are Lithographs of K Street in the city of Sacramento, California during the Great Flood of 1862 The flood affected the Western United States, from Oregon through California, and Idaho through New Mexico.

Today, the same Central Valley areas that were submerged in 1861-62 storm are home to many of California’s biggest cities. It is sobering to note that a great flood of similar magnitude can happen again; all we need is a sustained atmospheric river event like that one. It isn’t a matter of if, but when.

In fact, in a publication by the U.S. Geological Survey in 2013, it was noted that, “Geologic evidence shows that truly massive floods, caused by rainfall alone, have occurred in California about every 200 years.”

“Scientists who created a simulated megastorm, called ARkStorm, that was patterned after the 1861 flood but was less severe, found that such a torrent could force more than a million people to evacuate and cause $400 billion in losses if it happened in California today.”

If we have another weather event like 1862, California would be crippled.

If California had more water storage, some of the flooding could be mitigated, unfortunately, the last major new reservoir built in California was the New Melones Reservoir, on the Stanislaus River in Calaveras County, in 1979. Apparently, we’ve learned nothing from events of the past, be it drought or deluges.

There have been other deluge events, though none as large as 1862. December 20, 1955, had huge amounts of rain in a 24-hours, with Shasta County recording a record 15.34 inches in just one day. On December 23, 1955, the Russian River reached a crest of 49.7 feet in Guerneville, the highest ever recorded there, and a broken levee along the Feather River on Christmas Eve flooded Yuba City, drowning 37 people.

And then there was the Lake Oroville Dam failure in 2017 that was the result of a days long atmospheric river event, which resulted in precipitation totals greater than 150 – 200% above normal for many Northern California locations.  According to a scientific paper published in Geophysical Research Letters about that event:

That was just a 5-day event, imagine what would happen to California if it was 10, 20, or even 40 days long like what happened in 1862. But, anecdotal evidence suggests such events go back a very long time.

The American River Watershed Project noted that Native Americans who’d lived for centuries in the region “knew the Sacramento Valley as an inland sea when the rains came,” and their “storytellers told of water filling the valley from the Coast Range to the Sierra.”

On the flip side of our wet weather, drought, there is evidence of droughts in California lasting as long as 200 years.

The chart above uses data from the 2007 E.R.Cook et al. study  showing severe droughts lasting as long as 200 years going back to 1200 years ago. Meanwhile, at the far right, the drought we’ve experienced in the 21st century is clearly evident and minuscule by comparison.

Clearly there have been long-lasting severe droughts in the Western USA long before the modern occupation of California. California’s weather patterns are clearly at the whims of what patterns occur in the Pacific Ocean, which can have long-term pattern changes lasting decades. One, called the Pacific Decadal Oscillation (PDO), only became known to science in the 1990’s. NOAA says, “…it is often described as a long-lived El Niño-like pattern of Pacific climate variability. Extremes in the PDO pattern are marked by widespread variations in the Pacific Basin and the North American climate.”

These mega-droughts and mega-floods all occurred well before “climate change” started being blamed for every weather event. Imagine the wailing and gnashing of teeth from “woke media” and keyboard warriors if those events occurred today.

The bottom line is this: climate is what you expect, weather is what you get. California should plan for major weather events in the future, be they wet or dry, by improving and hardening our reserves and infrastructure.