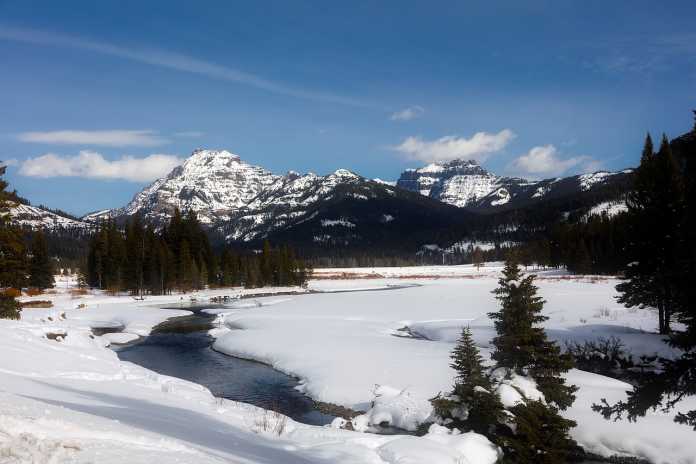 The Washington Post is hoping to stoke climate alarm in MAGA country, publishing an article titled “Snow may vanish for years at a time in Mountain West with climate warming.” The subtitle reads “Study warns of impending water supply problems due to nearly snowless mountains in about 35 to 60 years.” Don’t worry, there will still be plenty of snow in the Mountain West 35 years, 60 years, and even 100 years from now. Some areas in the Mountain West receive an average of between 200 and 400 inches of snow each year and remain far below freezing for much of the year. Also, there has been no decline in global snow cover during the past 30 years.

The lead author of the study referenced in the Washington Post article is a bureaucrat at the Lawrence Berkeley National Laboratory, which is a laboratory whose funding is heavily dependent on the perpetuation of an asserted climate crisis. The other authors are California university employees – a group well known for political activism. This doesn’t mean the paper has no chance of being accurate, but it does mean we should look under the hood of the claims and not simply accept the claims at face value. As it turns out, the paper clearly is overly alarmist and there is virtually no chance that its doomsaying predictions will come true.

According to the Post, the study claims, “In about 35 to 60 years, mountainous states are projected to be nearly snowless for years at a time.”

Also, according to the Post, “Due to rising temperatures, the region has already lost 20 percent of its snowpack since the 1950s.”

Finally, the Post claims, “For example, 2015 was an example of an extremely low snow year in the Sierra Nevada, when peak snowpack was only 5 percent of normal. Such years are projected to become chronic and persistent, occurring for prolonged periods of five to 10 years at a time.”

Let’s take a closer look at each of these alarming claims.

Let’s start with the claim that “the region has already lost 20 percent of its snowpack since the 1950s.

The Washington Post presents no source for its dubious claim, but appears to be referencing an assertion in the paper that snowpack in the Western United States on April 1 is about 20 percent below 1950s averages. Even if the claim is true, that would be a cherry-picked date designed to hide more important, reassuring trends.

First, Rutgers University keeps track of annual global snow cover. As documented in Climate at a Glance: Snowpack, the Rutgers data show that since satellite measurements first began in the 1960s, average snowpack has increased throughout the Northern Hemisphere in the fall and winter months. The Washington Post and the authors of the paper it cites cherry-pick a time of year – April 1 – that defies the overall snowpack trend in order to make an alarming generalization that is misleading misinformation.

Second, the Rutgers data show that average North American snowpack extent for the year as a whole is virtually unchanged in recent years compared to the late 1960s, when precise satellite measurements of snowpack first began.

Third, the Rutgers data show that after a short-term decline in the late 1980s, North American snowpack extent has been on an upward trend since the late 1980s.

Now, let’s examine the prediction that “In about 35 to 60 years, mountainous states are projected to be nearly snowless for years at a time.”

Even if we ignore the flawed, cherry-picked nature of the 20-percent decline claim, that still would mean it took 70 years for snowpack to decline by 20 percent. By what logic does that support the assertion that the remaining 80 percent will disappear in just half that time? Neither the Washington Post article nor its cited paper provide any compelling reason.

Finally, let’s examine the assertion that “For example, 2015 was an example of an extremely low snow year in the Sierra Nevada, when peak snowpack was only 5 percent of normal.”

Yes, there was little snow in the Sierra Nevada mountains in 2015. That was an unusual event, not a typical event. Since then, for example, snowfall has been remarkably abundant. There has been so much snow in the Sierra Nevada mountains since 2015 that government officials had to make special releases from Lake Tahoe into the Truckee River each spring in the years 2017, 2018, and 2019 because Lake Tahoe had reached its maximum water capacity each year because of so much snow. The years 2017, 2018, and 2019 are more recent than 2015, but the Washington Post deceitfully mentions 2015 while ignoring the more recent years of abundant snowfall in order to mislead its readers and hide the truth.

In summary, the Washington Post article continues its misinformation campaign to convince people of a climate crisis that does not exist. Predictions of a snowless Mountain West within the next few decades are implausible on their face. An honest and credible newspaper would not “report” something that is 180 degrees contrary to the truth.

Sorry, Washington Post, Snow and Dogsledding Are Safe in Michigan

Snowfall EVERY DAY Atop Kilimanjaro – Where Is Al Gore?