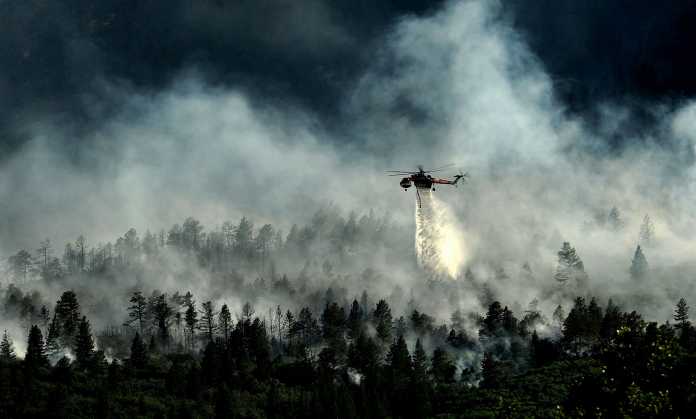 An article published by NBC Lexington, titled “More states are using tax dollars to combat the effects of climate change,” describes a Colorado-state funded initiative to mitigate the supposed effects of climate change. The program establishes a taskforce composed of young adults from 17 through 26 to help to clear dry brush and wood near homes and properties that may be otherwise susceptible to catching fire. This is actually a good policy for forest management in general, despite the reasoning behind it in this instance being based on faulty science. Wildfires are not being caused, or increased, by anthropogenic climate change.

The move to clear underbrush to prevent the spread of fires is an admirable one, and good policy at that. Removing a source of fuel for fire near homes and roads has long been a fire mitigation strategy in good forest management.

By burning piles of wood and brush, they hope to further prevent catastrophic fires like the Marshall Fire that burned more than 1,000 homes in late December not too far from where they are burning piles. By mitigating fire activity, they are also preventing dangerous mudslides that can trigger after a fire, endangering lives as well as the water shed.

Two members of the corps, regional manager Claire Morrisey and fire prevention coordinator John Knudsen, told NBC they believed their work was in response to increasingly intense wildfire activity due to climate change.

“Each summer, fire behavior seems a little bit more extreme. Last year, we had three of our bigger fires in Colorado history. So, that was definitely a red flag,” said Knudsen.

“Fire seasons are longer; fires are burning hotter,” added Morrisey. “So, being in cohabitation with fire is more difficult and that’s why the resources and the project work this crew is conducting is just becoming more important.”

Data from the National Interagency Fire Center, discussed in Climate At A Glance: Wildfires, shows that the acreage burned from wildfires today is significantly less than earlier in the 20th century, so the recent warming hasn’t been causing more wildfires in recent decades.

Wildfires are a natural part of the American landscape, and are even vital to forest health. However, uncontrolled wildfires pose a serious threat. These kinds of fires are fed by overcrowded forests as a result of federal forest management policies, which cause a buildup of dead and dying trees and dry underbrush. These sources of high “fuel loads” contribute to the intensity and speed at which fires can spread. For example, environmental groups successfully fought to have the northern spotted owl as endangered and then claimed old growth forests provided critical habitat for them. To protect the owls, logging was drastically reduced. The result, as detailed in Climate Realism, was an increase in wildfires that destroyed owl habitat.

Increasing the prohibition of logging timber in the west also means there are fewer logging roads being kept clear and drivable. These roads once served as “fire breaks” which work as boundaries that hinder the ability of fires to spread, and provided easy ways for firefighters to get close to forest fires to help control them.

Poor forest management at the state and federal level has long plagued Western states like California and Colorado, and blaming increased fires on global warming only helps to obfuscate the real problem. Still the task force is a good idea!