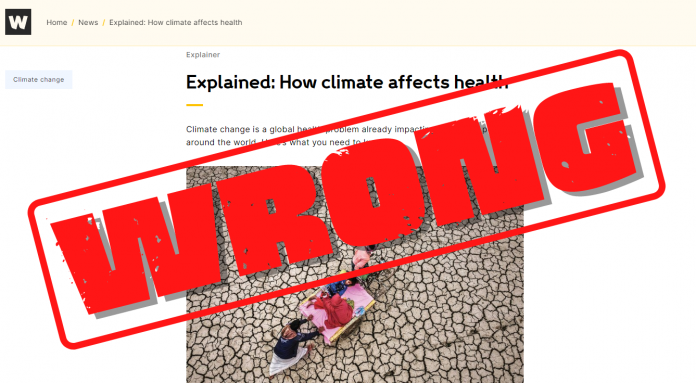 The authors of the Wellcome report, titled “Explained: How climate affects health,” write:

Climate change is a global health problem already impacting millions of people around the world.

Extreme climate and weather events, such as droughts, floods and heatwaves, are increasing in severity and frequency across the world.

These changes are harming our health on a large scale.

The report then goes on to assert deaths and illnesses related to extreme weather and non-optimum temperatures are rising due to climate change.

Wellcome’s claims are refuted by available data. Even the U.N. Intergovernmental Panel on Climate Change (IPCC) admits is there is little or no evidence for an increase in extreme weather events.

Since, as demonstrated in the articles discussed above, weather is not becoming more extreme, it is impossible for Wellcome to logically imply that an increase in extreme weather events is causing an increase in deaths.

For instance, below is an update of the graph in the 2020 peer-reviewed article by Bjørn Lomborg: Welfare in the 21st century: Increasing development, reducing inequality, the impact of climate change, and the cost of climate policies. 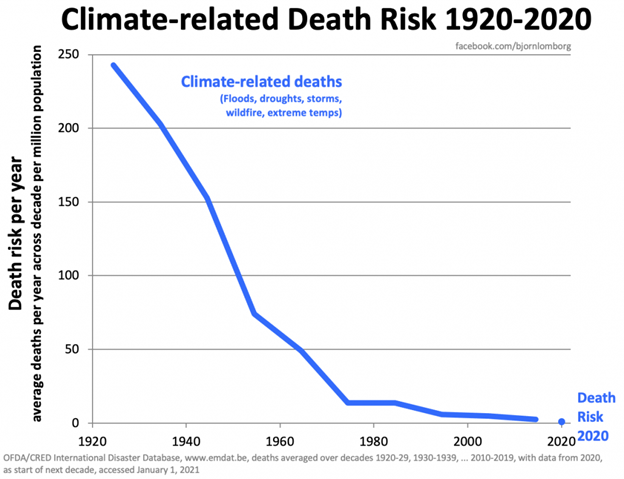 But because the world’s population also quadrupled at the same time, the climate-related *death risk* has dropped even faster. The death risk is the probability of you dying in any one year. In the 1920s, it was 243 out of a million people that would die from climate-related disasters.

On July 1, 2021 The Lancet published what is arguably the largest study ever to examine excess mortality associated with temperature. The study’s authors, 68 scientists representing universities and research institutes in 33 countries spanning all regions of the world, came to two very clear conclusions: Cold temperatures contribute to far more deaths each year than warmer temperatures; and deaths associated with extreme temperatures, hot or cold, are declining.

The authors wrote, “[i]mportantly, cold-related death decreased 0.51 per cent from 2000 to 2019, while heat-related death increased 0.21 per cent, leading to a reduction in net mortality due to cold and hot temperatures.”

Because cold related deaths outnumber deaths tied to extreme heat by 10 to 1, the study found hundreds of thousands fewer people have died in response to non-optimum temperatures each year as the earth has warmed in recent decades. (See the figure below) 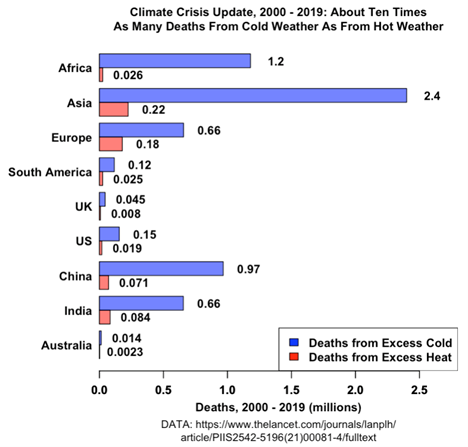 This study confirms what research previously published in The Lancet, the Southern Medical Journal, and other outlets, has consistently shown: Cold is the biggest temperature related killer, not heat, and as he earth warms the number of deaths related to extreme temperatures is falling dramatically.

Wellcome uses inferences, innuendo, and cites anecdotal cases to claim human health and welfare is suffering as a result of anthropogenic climate change. Wellcome’s alarming report may play well to its donor base or to its target audience in the alarmist press and activist community, reinforcing as it does the false narrative that climate change is making everything worse, but is fails to tell the truth.

A foundation truly concerned about helping “everyone to benefit from science’s potential to improve health and save lives,” would follow the science and be more attentive to the data. If Wellcome did so, it would likely redirect its resources and grants to research into the causes and consequences of pandemics, human addictions, cancers, vector-borne diseases, or other issues which demonstrably adversely impact the health of millions of people each year, rather than squandering valuable resources promoting false climate change-health harm scare stories.