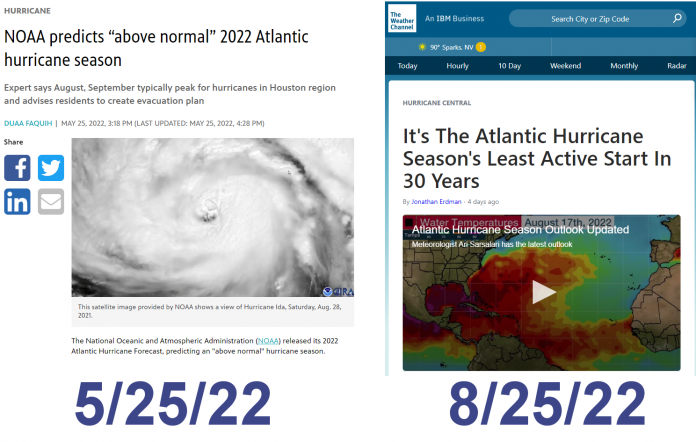 Back in May, many media outlets ran with this headline courtesy of a press release from NOAA:

Media outlets like Houston Public Media trumpeted it as if it was fact, saying:

NOAA says there is a 70% chance of 14-21 storms forming, with as many as ten potentially becoming hurricanes. Three to six of these storms could become major hurricanes.

NOAA administrator Dr. Rick Spinrad said the past two hurricane seasons were “extremely active” and the first to run out of their annual 21 storm names in back-to-back years.

Spinrad also detailed the improvements that NOAA forecasts have made over the past few years. He attributed their advancements to NOAA’s weather forecast system, Hurricane Hunter flight data and the administration’s ability to accurately pinpoint at-risk areas.

But that “better science” has so far been a bust. The problem is, as nearly three months have elapsed since the official start of hurricane season on June 1, not one has yet materialized.

TWC had some succinct points:

While the number of storms isn’t pacing far below the season-to-date average, Colorado State University tropical scientist Phil Klotzbach pointed out it was the first time in 40 years that no named storms formed from July 3 – August 22 in the Atlantic Basin.

As of Aug. 20, the 2022 hurricane season’s ACE index is pacing the lowest of any year since 1992, according to Kim Wood, associate professor at Mississippi State University.

Short for Accumulated Cyclone Energy, the ACE index sums up how long storms last and how intense they become, instead of just raw counts of storms. Each of the Atlantic Basin’s three storms was relatively weak and short-lived, though Bonnie went on to become a hurricane in the Eastern Pacific Basin.

That ACE value, tracked by hurricane expert Dr. Ryan Maue showed a marked drop to just 24% of normal for the year to date, as seen highlighted in the table below:

Both NOAA and the media have now gone into damage control mode, insisting with a new press release on August 4, 2022, that with the “better science” they claim they have, it could still happen.

Some of the headlines included: 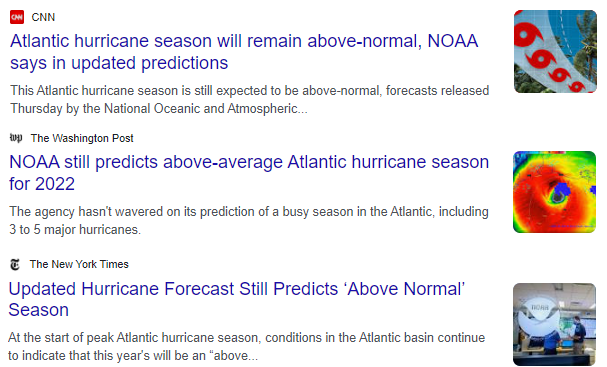 Yet it has now been almost 4 weeks later, and there has been no hurricanes, no tropical storms, not even a significant disturbance. According this graphic from the National Hurricane Center, at 1:37 PM EDT Fri Aug 26 2022,  the Atlantic is devoid of any storms at all. 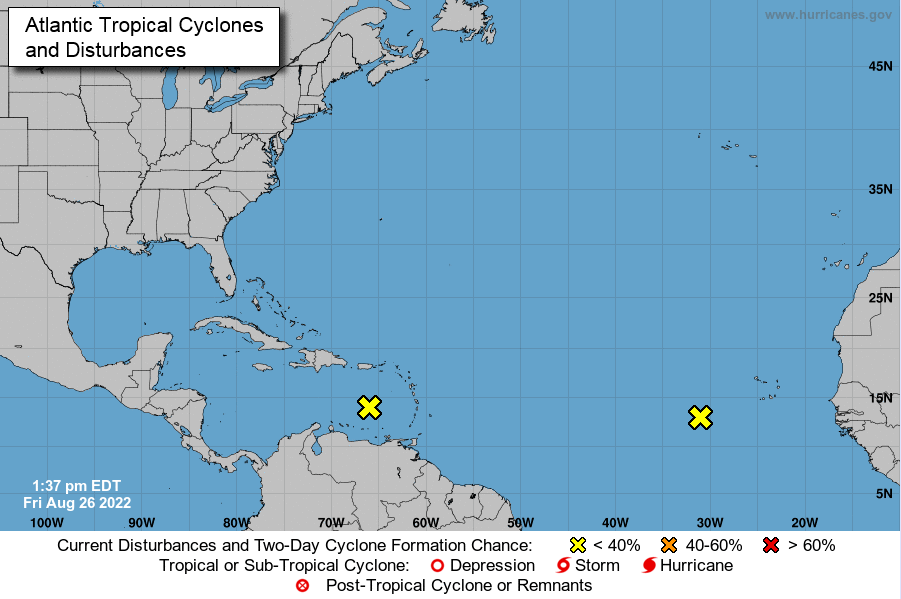 We are often told by climate experts and climate activists to “follow the science.” But when science fails to produce accurate forecasts, who should we follow then?