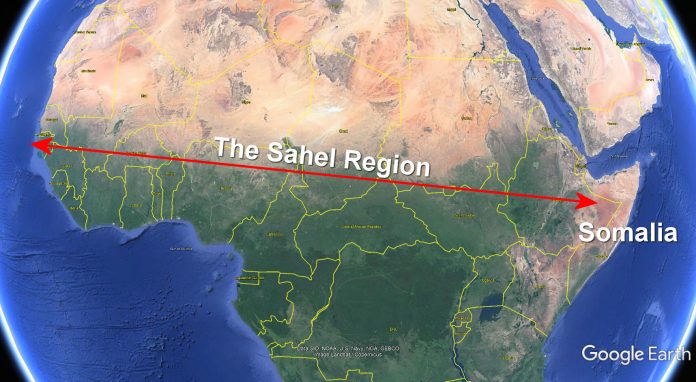 CBS News recently published a news report claiming climate change is resulting in Somali children dying from starvation. The link between climate change and Somali children starving is false. Somalia’s present drought is not a sign of climate change. Periodic droughts are not uncommon in the region, and the present one is only partly responsible for lost agricultural production. The main factor causing extreme hunger and starvation is Somalia’s long-term ongoing civil war which has fractured the country, disrupting food production and transportation.

The excerpts are equally bad:

Somalia’s children are among the youngest victims of climate change. CBS News visited an intensive care ward where every child was under five, all of them hospitalized by the climate change-induced drought that has left their nation starving.

The security situation in Somalia, where the al Qaeda-linked al-Shabaab terror group holds significant ground, blocking humanitarian work, is contributing to the catastrophe, but other human actions are also to blame. A 2020 survey ranked Somalia as the second-most vulnerable nation to the impacts of climate change in the world, and the drought is how that risk manifests.

After more than two years without rain, there is nothing left to eat.

A multi-year drought has affected Somalia, and it is tragic that people, especially children, are going hungry and even dying from starvation. However, Somalia has previously experienced natural weather patterns, that have delivered multi-year droughts interspersed with years of above average rainfall that produced flooding, before. These patterns, not climate change, which is a long-term occurrence, are responsible for current conditions.

CBS News ignores Somalia’s climate history and would have one believe that the drought is driven by changes in the climate, rather than doing basic research to discover what the real cause of the drought it.

Situated in the Horn of Africa, Somalia is normally mostly arid, as monsoon winds lose most of their moisture by the time they reach the country.

Going back a decade the drought of 2010-11 was of a different magnitude than those that often come in due to the El Niño weather cycle. Right now, the world is in a La Nina pattern and the effect is being felt in the United States as a three year ongoing drought in California.

Somalia is on the tail end of the Sahel region in Africa. Because winds and weather flow from West to East, what happens in the Sahel also affects Somalia.

The Sahel, like Somalia, is semi-arid and prone to drought driven by the vagaries of weather patterns, such as El Nino and the Atlantic Meridonial Oscillation (AMO). Right now, the AMO is in the positive phase, seen in Figure 1 and which has profound affects across Africa:

Combined with a positive AMO pattern phase in the Atlantic, Somalia’s 2010-2011 drought was the worst it had experienced in forty years, triggering an official declaration of famine. In 1975, before climate change was on anyone’s radar there was a massive drought in Somalia, described in a USAID document:

As the effects of the drought spread in six of the country’s 15 regions, increasing livestock deaths resulted, and feeding and caring for the nomadic peoples, normally completely dependent on their animals, became a major humanitarian concern.

The drought in Somalia developed due to the abnormally low rainfalls in 1973 and 1974 and was aggravated by the consequences of drought conditions in neighboring countries.

That almost exactly describes the drought in Somalia today, sans any mention of climate change being the cause. Interestingly, the earlier drought occurred when the Earth was in a cooling period. Some scientists at the time were warning that an ice age was imminent.

A 2011 study found that shifts in the African easterly jet stream and African easterly waves accompanied the northward migration of the Sahel rainband. That’s when Somalia really started to get into trouble with the 2011 East Africa drought.

Paleo-climate studies show that Sahel region of Africa has long experienced a series of historic droughts, dating back to at least the 17th century.

There were severe North African droughts recorded in the 1910s, the 1940s, and the 1960s, 1970s and 1980s, although a partial recovery occurred from 1975-80. The most recent drought before this one occurred in 2011-2012. Further, there is evidence of past droughts recorded in Ghanaian lake sediments suggest that multi-decadal megadroughts were common in West Africa over the past 3,000 years and that several droughts lasted far longer and were far more severe.

A study published in the journal Science in April 2009 suggested some very long droughts in the region, during the period known as the Little Ice Age:

The most recent of these [multicentury droughts] occurred between 1400 and 1750 CE (550 to 200 yr B.P.), similar in timing to the Little Ice Age (LIA, 1400 to 1850 CE), a well-known interval when Northern Hemisphere temperatures were cooler than at present. In contrast with earlier studies, which reconstructed wetter conditions in East Africa during this period, evidence from Lake Bosumtwi supports more recent studies suggesting that this interval was dry. Evidence for LIA drought is not restricted to Africa, however. Records from throughout the tropics, including the western Pacific warm pool, the Arabian Sea, continental Asia, and tropical South America all show evidence for dry conditions during this time period.

More recently, the Figure 2 graph shows rainfall data for the Sahel band and illustrates the high rainfall variability in the last 120 years.

In short, drought in the Sahel band in North Africa is a normal and regular occurrence that happened long before man-made climate change was ever an issue.

Tellingly, since the 1980s, summer rainfall in the Sahel has been increasing; this has been associated with an increase in vegetation, forming what has been called a ‘greening’ of the Sahel. The observed increase in rainfall is accounted for by enhancements in the African easterly jet, which is known to induce wet anomalies.

Further evidence supporting the case that internal conflict and Somalia’s political fragmentation is behind rise in hunger in Somalia is the fact that Ethiopia and Kenya, the two north-east African countries which border Somalia, have also been effected by a regionwide drought in recent years. Yet of those three countries, over the last 30 year period of climate change, only Somalia has experienced declining food production. Data from the U.N. Food and Agriculture Organization (FAO) show a substantial increase in cereal crop production in Ethiopia and Kenya over the past three decades, but just the opposite in Somalia which has suffered under a civil war since 1988. FAO data show that:

Unfortunately media outlets like CBS News rarely bother to do actual research when they run stories about the impacts of climate change. They ignore historic weather patterns and evidence showing that weather patterns occurring today have happened before and have been regular occurrences throughout history. To acknowledge that would be to undermine the false narrative being spun that present weather conditions, and the tragic events and deaths that sometimes result from them, are unprecedented and are a result of you and your children’s use of fossil fuels for energy.