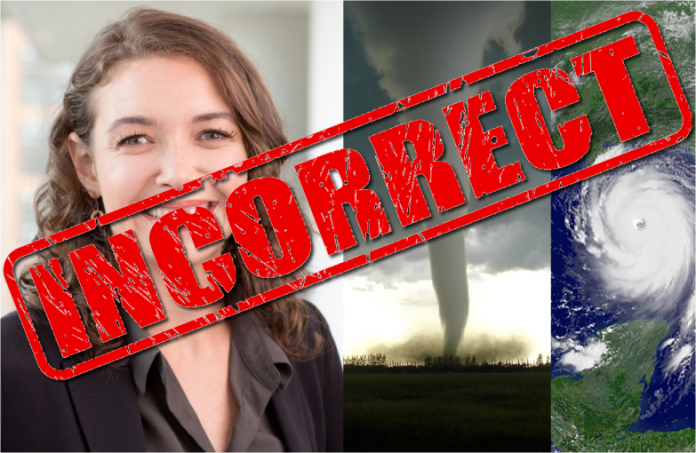 Rebecca Hersher recently produced an article for National Public Radio (NPR), titled “Climate change is making the weather more severe. Why don’t most forecasts mention it?” The article is just one more example of journalists acting as climatologists, making false claims based on other media reports rather than the actual known science.

Many of the assertions Hersher makes in her article are demonstrably false. In addition, there is no evident benefit to adding a false climate connection to National Weather Service (NWS) reports, forecasts, and warnings.

Climate science acknowledges that weather and climate operate on vastly different time scales, 30 years versus hours to days. By contrast and contrary to fact, the profession of journalism seems to really believe climate is equivalent to weather.

One of the most common severe weather claims is that hurricanes are getting worse and more frequent due to climate change. Three lines of evidence: tropical storm accumulated energy, frequency, and research (see table 1 below) show this claim is false. Data show hurricanes have neither increased numbers or intensity during the recent period of modest warming.

Same for tornadoes, there’s no increase. The list of extreme weather that has NOT increased due to the supposed influence of climate change is quite large and well documented.

For example, the Intergovernmental Panel on Climate Change (IPCC) AR6 report, Chapter 11, Weather and Climate Extreme Events in a Changing Climate, provides conclusions, summarized in Figure 1, illustrating the fact that changes in the number and intensity of severe weather events have not been detected, nor can any changes be attributed to human caused climate change:

Clearly from the data and the research, no evidence exists that any specific weather event is directly driven (or enhanced) by so-called man-made climate change from increased carbon dioxide in Earth’s atmosphere. The IPCC’s summary of the state of global climate science makes no such attribution. You’d think journalists could embrace this rather than writing falsehoods based on a belief system.

Regarding the second point Hersher makes in her headline: Why don’t most forecasts mention it?

It is really simple – it is not part of the mission statement of the NWS:

Provide weather, water and climate data, forecasts, warnings, and impact-based decision support services for the protection of life and property and enhancement of the national economy.

Even if the NWS did provide some sort of climate component, what value would it offer to the public?

For example, what if a future NWS tornado warning looked like this:

The National Weather Service in Dallas Texas has issued a climate-enhanced Tornado Warning for Dallas and Tarrant counties, including the cities of Dallas, Irving, Arlington, and Garland, until 3PM CST.

Adding “climate” to the warning does absolutely nothing. It doesn’t provide any new information, nor does it provide any gauge of intensity, severity, or time. All it does is add a useless nod to the climate narrative to assuage people like Hersher who wrongly believe there is some link between climate and tornadoes, when the data and the research indicate no such link exists.

When people are facing a natural disaster like a tornado they need immediate and useful information which will help them survive, not useless irrelevant and false labels hinting that humans are somehow at fault for a particular storm.

Hersher simply didn’t do her job as a journalist. She chose to promote a connection to between supposed human caused climate change and weather events, when none exists. In the process, she ignored relevant facts which demonstrate no increasing trend in extreme weather.

She chose advocacy over truthful reporting, a shameful breach of journalistic professionalism.