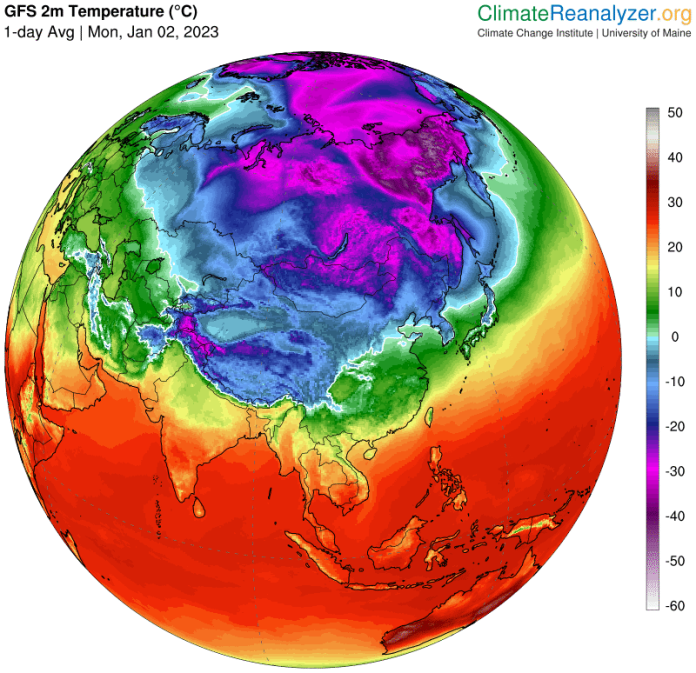 At 39 degrees Fahrenheit, India’s capital of Delhi experienced one of the coldest winter nights this year on December 27. The region is home to 32 million people, with millions of them having no access to heating in their homes. Neighboring states recorded below-freezing temperatures.

In contrast, nearly all of metro New York’s population of 18 million has home heating. Delhi’s situation would be considered a humanitarian crisis in the U.S.

The Indian media’s attitude generally is to shrug off such winter events as an aberration of weather while treating high summer temperatures as proof of catastrophic climate change. You see, Delhi, an ancient city that has been subjected to many invasions over the last thousand years, has recently been invaded by climate alarmism.

Every year, media outlets are quick to jump on summer hot spells. Even news outlets in the U.S. have begun reporting to audiences ignorant of Indian realities the occasionally extreme heat of the subcontinent as proof of dangerous global warming.

While city thermometers do at times record exceedingly high temperatures, the usual cause is the well-known urban heat island – a phenomenon that gets a boost even from the exhausts of air conditioning units in densely packed residential areas.

Usually ignored by the media is that summer heat is generally less dangerous than winter cold. There are multiple ways to adapt to heat. Increasing water consumption, limiting exposure to heat, weather proofing roofs and increasing green spaces are among them. However, adaptation to cold usually requires a reliable heating source, something that is not readily available to the poorest in developing countries.

Delhi has been witnessing historically cold winter temperatures during the past five years. Lacking access to proper heating, millions of people in the city suffer from cold-induced morbidities. Like any other place, cold kills more people than heat in India. Many burn wood and waste together in open spaces, a common sight even in the city’s wealthiest pockets.

Observers like me have been pointing out record-breaking cold weather in the country’s capital year after year. A 100-year-old record for low temperatures was registered in recent years. Yet, the media in India and around the world seldom recognize these cold spells as contradictions to the dominant climate-change narrative.

The lack of logic in media reports is often stunning. Not long ago, alarmists claimed that snow would be a thing of the past. Today, many of them say global warming will cause excessive snowing. Excuse me while I scratch my head.

Expect the contradictions of alarmists’ pronouncements and media reports to increase in the coming days. Weather events of virtually all manner will be presented as evidence for a coming apocalypse spawned by man-made global warming. The objective is not to shed light on the actual cause and effects of weather or climate but rather to add to a ridiculous doomsday vision.

This commentary was first published at American Thinker, December 29, 2022, and can be accessed here.

Vijay Jayaraj is a Research Associate at the CO2 Coalition, Arlington, Virginia. He holds a master’s degree in environmental sciences from the University of East Anglia, UK and resides in India.