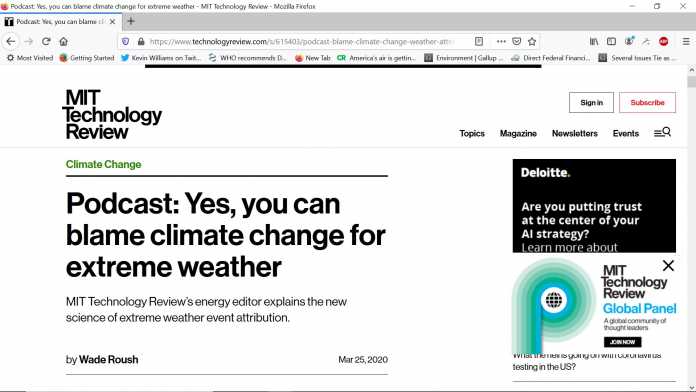 A March 25 MIT Technology Review podcast titled, “Yes, you can blame climate change for extreme weather,” defies objective facts and even the findings of the United Nations Intergovernmental Panel on Climate Change (IPCC). Somebody should publicly shame MIT for attacking climate science and being science deniers.

The host begins the podcast by saying, “One thing we know about the climate crisis is it makes extreme weather more likely.” Justifying this bold assertion, the podcast discusses how some researchers are using climate models to generate “statistical odds” that climate change is making each particular extreme weather event worse. But models aren’t reality, and these are the same models that predicted much more warming during recent decades than has actually occurred. Moreover, it defies common sense to say climate change has made a particular hurricane, tornado, drought, or flood worse when the objective data show no real-world worsening of these events.

The podcast spends a large amount of time discussing the recent Australian wildfires, concluding, based on computer model simulations, anthropogenic climate change made the wildfires 30 percent more likely. Yet the authors failed to mention the above-average rainfall in the country over the past two decades prior to 2019, which suppressed wildfires. Did climate change impacts only begin in 2019? Also, Australian government policies limited or banned logging and brush clearing, setting up tinderbox conditions when Australia’s historically common droughts returned. As geologist Gregory Wrightstone explained in a recent podcast, these are certainly more plausible contributing factors than global warming.

MIT’s claims regarding other extreme weather events are even more thoroughly discredited by objective data and the United Nations IPCC.

The MIT podcast explicitly mentions drought, implying that climate change makes it worse. However, as documented by Climate at a Glance: Drought, National Oceanic and Atmospheric Administration (NOAA) data show, “[t]he United States is undergoing its longest period in recorded history with fewer than 40 percent of the country experiencing ‘very dry’ conditions.” Also, Climate at a Glance: Drought documents that the IPCC reports “low confidence” that any negative drought trends are occurring globally.

The MIT podcast explicitly mentions floods, implying that climate change makes them worse. Yet, MIT is once again denying climate science when doing so. As documented by Climate at a Glance: Floods, IPCC reports “low confidence” that climate change is influencing either the frequency or severity of floods. Indeed, IPCC has concluded it is just as likely climate change is making floods less frequent and less severe as it is to be increasing the frequency or severity of floods.

The MIT podcast explicitly mentions hurricanes, implying that climate change makes them worse. However, as documented by Climate at a Glance: Hurricanes, U.S. hurricane activity has been at historic lows. Indeed, the United States recently experienced its longest period in recorded history without a major hurricane strike. Also, IPCC reports “only low confidence for the attribution of any detectable changes in tropical cyclone activity to anthropogenic influences.”

Computer models are not proof, or even evidence, of a climate crisis. This is especially the case when real-world observations falsify the computer models.

When it comes to climate change and extreme weather events, MIT and other alarmists are shamefully denying climate science.

Mega-droughts and Mega-floods in the West All Occurred Well Before ‘climate...

New York Times Misses the Fact That Drought is a Weather...