Among the top results today in a Google News search for “climate crisis” is an article published by The News Minute claiming climate change is causing a marriage crisis in India. The theory is that climate change is reducing crop output, which makes farmers less desirable for arranged marriages. However, assuming greater crop output results in better marriage prospects for Indian farmers, the objective scientific evidence shows Indian bachelor farmers have never had it better.

The News Minute article, titled “Marriage crisis for farmers in Andhra as climate crisis looms,” claims interviews with more than 1,000 farmers in India reveal global warming is causing poor crop production and a resultant lack of marriage prospects for bachelor farmers. Based on these subjective bachelor farmer complaints, The News Minute claims, “they are becoming ever less attractive grooms due to mounting uncertainties in farm incomes.”

“Increasing temperatures, changes in rainfall trends and more extreme natural hazards are negatively affecting incomes from agriculture. Climate change is leading to loss of crops, reductions in productivity, depletion of biodiversity, even the complete devastation of entire crops,” The News Minute claims.

As a result, “this precarity is affecting marriage patterns. Worsening climatic conditions, we found, are leading to a marriage crisis … because of the increasing uncertainty of farmers’ incomes, most parents no longer want farmers as their son-in-law.”

Let’s take a look at the FAO data for overall cereal production (the Big Three of rice, corn, and wheat) in India: 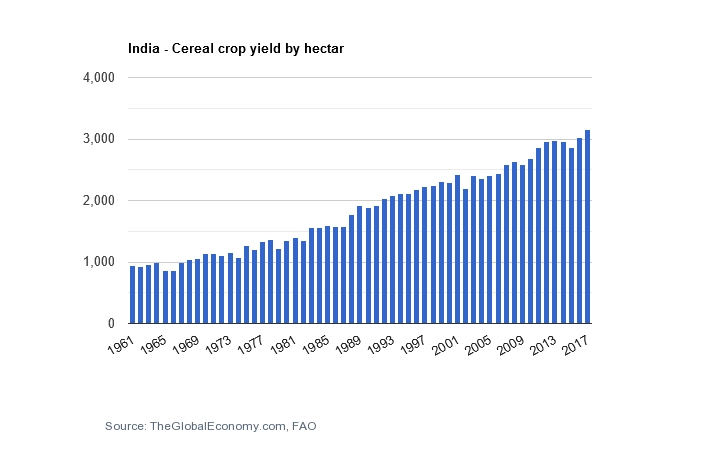 Rice is the primary crop in the Andhra area of India. Let’s take a look at FAO data for Indian rice production:

Now we know why The News Minute did not provide any data or facts to support its theory – because there are no facts or data to support its theory. The reality is rice production and overall cereal production are improving consistently and dramatically throughout India (and globally) as the Earth continues its modest warming. Indeed, new records are being set every year.

The News Minute story is similar to a plethora of media articles about farmers in various countries allegedly no longer being able to make a living because of global warming. So-called news reporters go searching for farmers who are not doing very well. Even in a time when crop production sets new records virtually every year, some farmers will not do well because they have been unlucky or they not very good farmers. Or, in this case, many bachelors remain bachelors because they are unpleasant people, or are unattractive in other ways, rather than because of global warming.