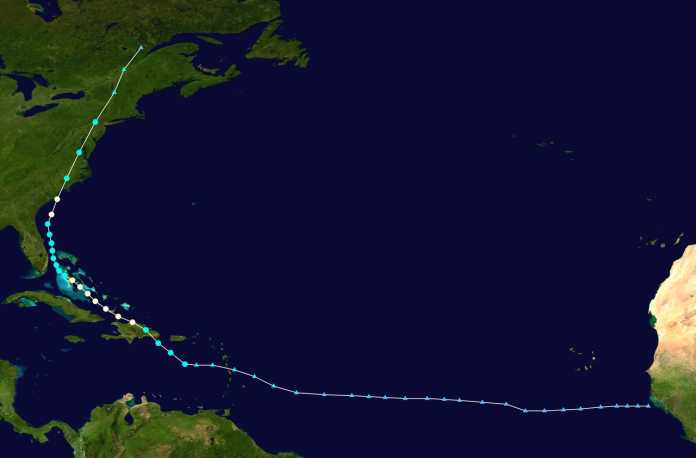 Hurricane Isaias hadn’t even made landfall in the United States before the media began proclaiming Isaias was the result of human-caused climate change. Not only is there no evidence for such a claim, but hurricane numbers have been declining as global temperatures modestly warm. Also, even the United Nations Intergovernmental Panel on Climate Change (IPCC) disputes any connection between global warming and hurricanes.

A New York Times article, titled “Hurricane, Fire, Covid-19: Disasters Expose the Hard Reality of Climate Change,” provided typical media coverage of Isaias. The article asserted, “Twin emergencies on two coasts this week — Hurricane Isaias and the Apple Fire — offer a preview of life in a warming world and the steady danger of overlapping disasters.” There is nothing unusual, however, about hurricanes forming and wildfires burning simultaneously, since the hurricane and wildfire seasons overlap.

TV weatherman Dan Satterfield added to the misinformation, publishing a blog post titled “Hurricane Isaias Will Be Wetter and Stronger Because of Climate Change.” Satterfield cited no evidence for this claim – because there is none.

To the contrary, and as detailed in Climate at a Glance: Hurricanes, hurricane impacts are at an all-time low. “The United States recently went more than a decade (2005 through 2017) without a major hurricane measuring Category 3 or higher, which is the longest such period in recorded history,” notes the Climate at a Glance summary. “The United States also recently experienced the fewest number of hurricane strikes in any eight-year period (2009 through 2017) in recorded history. Additionally, America’s most vulnerable state, Florida, recently concluded an 11-year period (2005 through 2016) without a landfalling hurricane of any size—the longest such period in recorded history.”

Even the U.N. Intergovernmental Panel on Climate Change 2018 “Interim Report” observes there is “only low confidence for the attribution of any detectable changes in tropical cyclone activity to anthropogenic influences.”

Applied to Isaias, strong upper-level wind shear battered Isaias in the Caribbean Sea. That wind shear prevented Isaias from becoming very organized, and was the primary reason the storm struggled to barely reach Category 1 strength. As documented in Climate at a Glance: Hurricanes, “Wind shear inhibits strong storms from forming and rips apart storms that have already formed. Scientists have learned that global warming is likely to cause more wind shear in places where hurricanes form and intensify.” And indeed, the much-ballyhooed warmer ocean waters due to global warming were no match for the global warming-fueled wind shear that stunted Isaias’ growth.

In summary, real-world hurricane data, the United Nations IPCC, and the particular history of Isaias show global warming did not cause Isaias or make the storm any worse. Any assertion to the contrary is fake science, even in the eyes of the United Nations. Therefore, we can thankfully expect Facebook and Twitter to soon issue a warning label, or block anyone from linking to or reposting, the media’s false claims that global warming spawned or worsened Isaias.

No, The Columbian, Climate Change is Not Causing More Power Outages