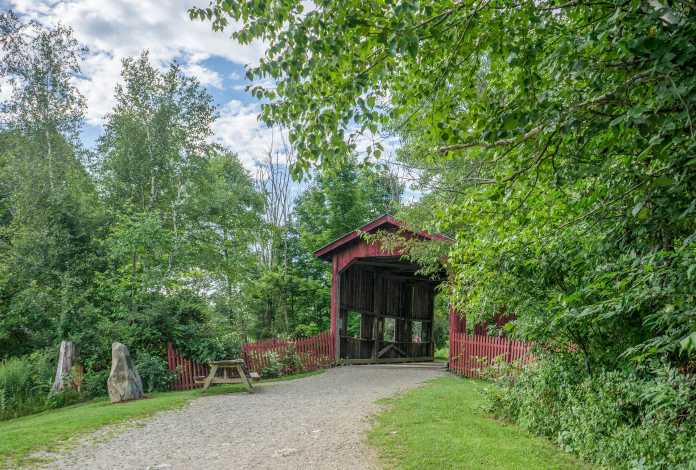 Among the top Google News search results today under “climate change” is a story in the VT Digger (motto: “News in pursuit of truth”) claiming recent warm, dry weather in Vermont is a sign of climate change. However, objective data show Vermont has been getting wetter as the Earth modestly warms. Yes, some droughts still occur despite global warming, but climate change is clearly not making Vermont droughts more frequent or severe.

The VT Digger article, titled “Drought, high temperatures symptoms of climate change in Vermont,” acknowledges that “no single weather event can be attributed specifically to climate change.” However, the author then goes on to claim, “drought is only part of the story … the climate had created a ‘perfect storm’ of extreme conditions this year. Not only was rainfall sparse, but temperatures hit record highs. Burlington had its all-time hottest July.”

The fact that the high temperatures for most states in New England were recorded in the early part of the 20th century should surprise no one, since 40 states’ record-high temperatures were set before 1960. Twenty-five states’ record highs were set or tied in the 1930s alone. Indeed, three times as many state record temperatures were recorded in the 1930s—two decades before humans began adding significant amounts of carbon dioxide into the atmosphere—than have been recorded since alarming stories about global warming became a nearly daily feature of the mainstream media’s news cycle.

New high-temperature records have been set in only two states since 2000. In fact, more states’ record highs were recorded in the 1890s than in the first two decades of the current century.

Concerning drought, rainfall is scarce in most states in the summer. Vermont is no different in this regard. Contrary to what the VT Digger claims, there is no evidence Vermont is in a period of extended drought. Data from the United States Drought Monitor show Vermont didn’t record even a single area of the state experiencing below average rainfall from the week of November 12, 2019 until the week of June 2, 2020. Not a single county in Vermont has been recorded as suffering from extreme or exceptional drought since the beginning of 2020. September was dry in Vermont, but it set no records for lack of rainfall. The Burlington area, for example, received approximately 1.35 inches less rainfall than is normal for the month in 2020, but in August Burlington received 2.7 inches more rainfall than normal for the month.

Long-term data from the National Oceanic and Atmospheric Administration (NOAA), recently reported on Climate Realism, clearly demonstrate that New England as a whole, and Vermont in particular, has become wetter during the past 30 years and 120 years, not drier.

NOAA’s annual precipitation records provide compelling evidence against VT Digger’s claim that climate change is causing drought in Vermont. As seen in the NOAA chart below, annual precipitation in New England and the U.S. Northeast has increased during the past 30 years.

Also, as shown in a second NOAA chart below, annual precipitation has dramatically increased over the past 120 years, with few places in the entire country experiencing a greater increase in precipitation than Vermont and neighboring New Hampshire since 1895. 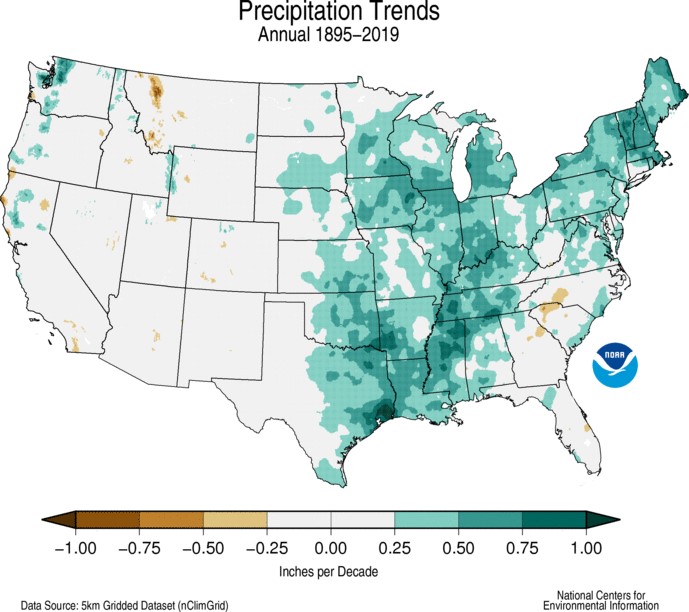 Every location on earth experiences drought from time to time. Vermont is no exception to this fact. However, objective scientific evidence clearly shows Vermont has enjoyed more precipitation and less frequent and severe droughts as the Earth has modestly warmed over the past century.

Sorry VT Digger, those are the facts.