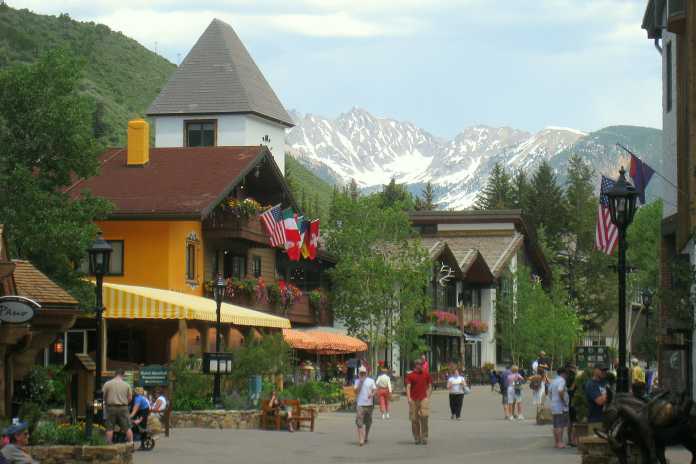 The Colorado Sun published a misleading and scientifically deficient article titled, “The high cost of climate change is already straining the budgets of Colorado towns.” To reach that conclusion, the article ignored real-world climate data reported by NASA, NOAA, and the United Nations Intergovernmental Panel on Climate Change (IPCC). In reality, climate change is reducing the frequency and severity of events the Colorado Sun claims is straining Colorado budgets.

The Sun article chronicles recent drought and wildfires in Colorado, as well as an active Spring 2019 avalanche season, laying the blame for these events on climate change. Objective facts tell a different story.

During the past few years, Colorado has indeed experienced below-average rainfall. But neither the severity nor the duration of current conditions is unusual. As shown in the National Oceanic and Atmospheric Administration (NOAA) chart reproduced below, periods of low rainfall happen from time to time. Colorado is currently experiencing one of those low-rainfall periods. However, there is no long-term trend of lower rainfall. In fact, the three individual periods during which Colorado experienced its least rainfall occurred between 1900 and 1955. No period since 1955 has been as dry for Colorado as those three separate events that occurred between 65 and 120 years of global warming ago. 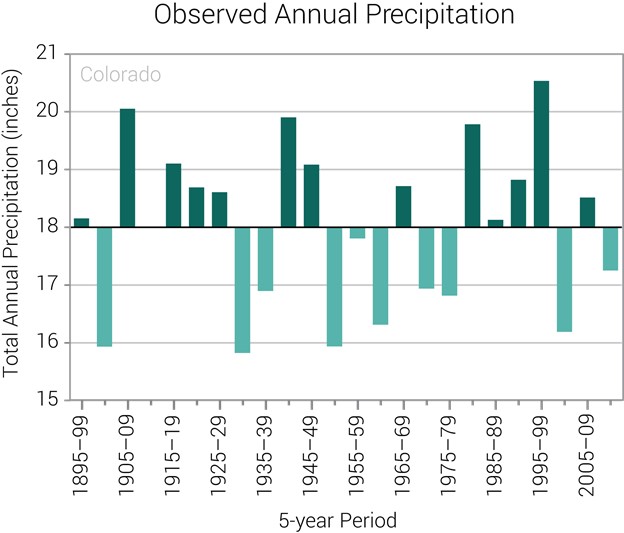 The Sun article points to rivers and streams in Colorado allegedly being 13% to 20% lower since the year 2000 compared to the 20th century average. As shown by the NOAA chart above, however, this has nothing to do with any asserted changes in precipitation. Rather, as shown by the chart below, Colorado’s rivers and streams are experiencing diminishing stream flow as a result of Colorado’s 33% increase in population – and hence, water demand – since the year 2000. 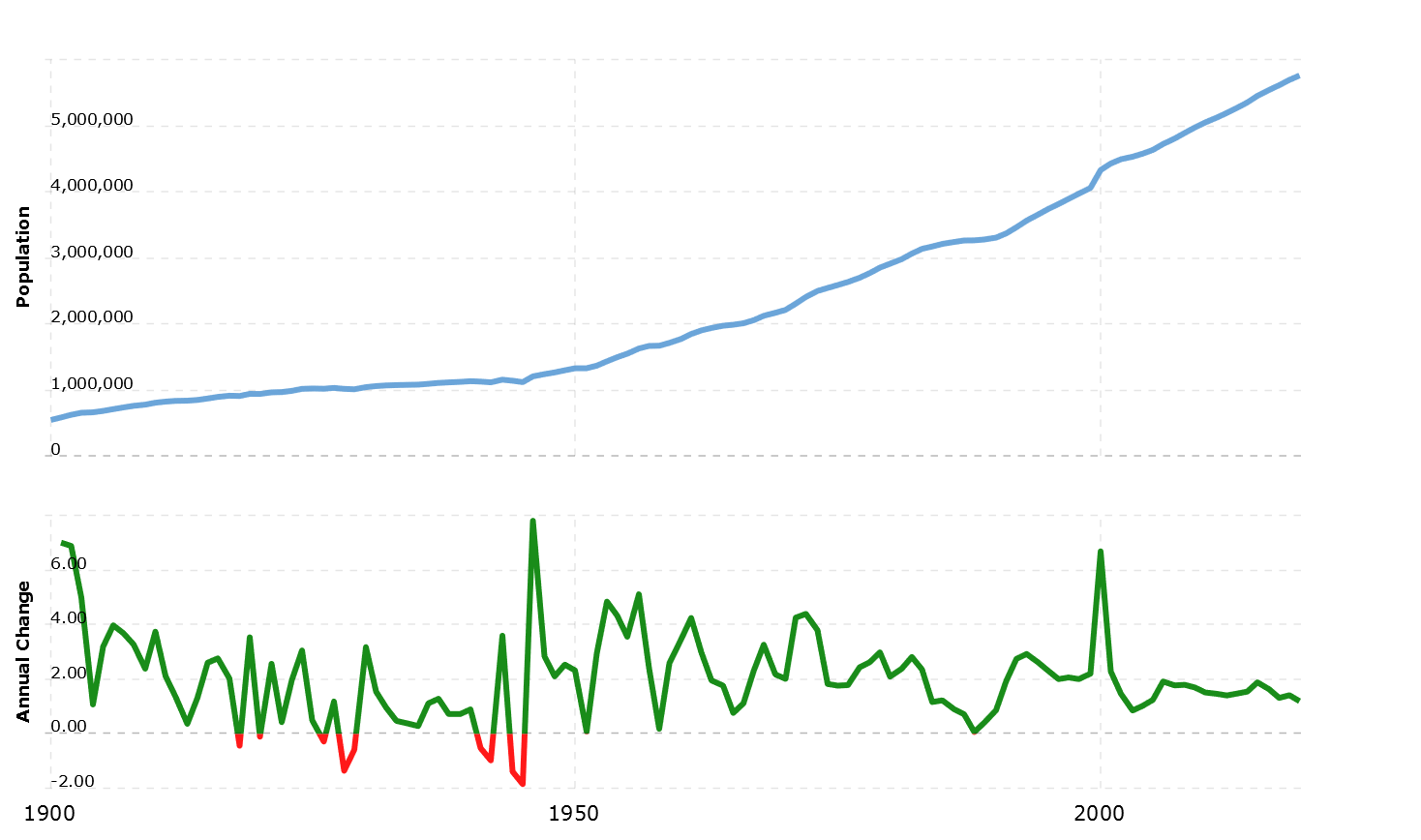 Scientists at Colorado State University (CSU) confirm the causal relationship between Colorado’s population growth and reduced streamflow. As CSU scientists report, “Much of the state’s water history has been shaped by population growth. In particular, a tenfold increase in residents from 1900 to 2010 (U.S. Census Bureau, n.d.) was paralleled by a similar increase in competition and demand for the water in Colorado’s nine major watersheds and four major aquifers.”

Unfortunately, global warming will not cause an end to Colorado’s recurring and preexisting cycles of above- and below-average rainfall. However, the fact that global warming is not ending the long-term Colorado drought cycle does not mean we can now blame drought cycles on climate change. This is especially the case given that NOAA data clearly show recent droughts are shorter and less severe than was the case several decades ago.

Even if recent Colorado drought had been unusually severe, it would still be improper to place the blame on climate change. With or without climate change, locations have experienced – and will continue to experience – periods during which rainfall is significantly less abundant than average. However, as shown in Climate at a Glance: Drought, the United Nations IPCC reports with “high confidence” that precipitation has increased over mid-latitude land areas of the Northern Hemisphere, including the United States, during the past 70 years, while IPCC has “low confidence” about any negative trends globally. In other words, if and when Colorado experiences an unusually severe drought (which is bound to happen sometime), such drought will run counter to overall global trends in a modestly warming world.

Indeed, as also documented in Climate at a Glance: Drought, the United States set a new record in 2017 for the smallest percentage of its land area experiencing “very dry” conditions. Then, in 2019, the United States broke the record set in 2017. Again, any regional drought that might affect Colorado would run counter to national and global trends, and thus would be difficult to blame on climate change.

After falsely asserting that climate change is causing more frequent and severe drought in Colorado, the Sun article asserts that such drought is responsible for recent wildfires in the state. While drought is the primary climate factor influencing wildfires, global and national wildfire data show no increase in the frequency or severity of wildfires. This should come as no surprise, given the above-documented lack of worsening drought conditions.

As documented in Climate at a Glance: U.S. Wildfires, U.S. wildfires in recent decades are far less frequent and less severe than was the case during the first half of the 20th century – 70 years of global warming ago. The chart below, showing data reported by the U.S. National Interagency Fire Center, documents the decline.

Moreover, NASA satellite instruments document an ongoing decline in global wildfires. Indeed, NASA satellites have measured a 25% decline in global lands burned since 2003. It defies logic to blame any asserted uptick in wildfires that may occur in a given region on climate change when wildfires throughout the world are becoming less frequent and extreme as the climate modestly warms.

To the extent that some wildfires still occur, they are becoming less frequent and severe. Moreover, recent wildfires in the western United States are more a product of environmental activists imposing unprecedented obstacles on sound forest management than climate change.

Finally, the Sun addresses avalanches during the spring of 2019 and claims climate change is to blame. Yet, objective data and the Sun article itself contradict the assertion.

According to the Sun, the above-average spring 2019 avalanche season was triggered by “early October snow that created a weak layer” of underlying snow, followed by “a steady buildup of snow in mid-winter, followed by a series of heavy snow events in March.

Climate activists, however, consistently claim global warming will reduce the amount of winter snowpack. Moreover, a later onset of winter in a warming world will make early October snow less likely. By climate activists’ own theory, the very conditions that the Sun claims caused the unusually severe spring 2019 avalanche season will become less frequent as the Earth modestly warms.

Moreover, despite a growing Colorado population and a substantial increase in the number of skiers and snowboarders since the 1980s, the Colorado Avalanche Information Center reports, as seen in the chart below, that the number of Colorado avalanche deaths does not show any long-term increase since the mid-1980s.

The Colorado Sun may believe it has an obligation to promote climate action, but its claim that climate change is causing strains on local government budgets is thoroughly debunked by objective scientific facts.

UN Contradicts Its Own Data to Promote Weather Disaster Alarm

Media Botches Reporting on Heat and Drought in Vermont