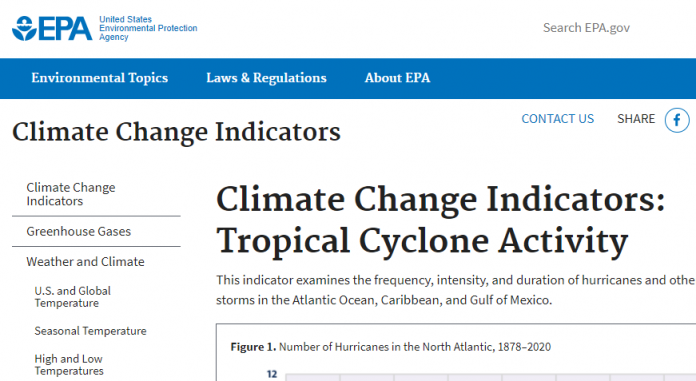 This is false. Data from the U.N. Intergovernmental Panel on Climate Change (IPCC) and the U.S. National Oceanic and Atmospheric Administration (NOAA) show incidences of extreme weather events are neither more frequent nor more severe than in the past.

“Since 1878, about six to seven hurricanes have formed in the North Atlantic every year. Roughly two per year make landfall in the United States. The total number of hurricanes (particularly after being adjusted for improvements in observation methods) and the number reaching the United States do not indicate a clear overall trend since 1878.”

EPA’s conclusion that hurricanes have not become more numerous in recent years is not surprising. As detailed in Climate at a Glance: Hurricanes, U.N. Intergovernmental Panel on Climate Change (IPCC) data, illustrated in the figure below, show no increasing trend in tropical cyclone or hurricane numbers. As a result, in its 2018 “Interim Report” the IPCC observes there is “only low confidence for the attribution of any detectable changes in tropical cyclone activity to anthropogenic influences.”

The EPA should have stopped its analysis when it was ahead, basing its tropical storm claims on firm ground backed by hard data. Instead, EPA hyped global warming alarm by claiming that climate change was making hurricanes more powerful, based on a measurement of Accumulated Cyclone Energy (ACE). An ACE value is a measurement of a tropical storms maximum wind speed measured at six-hour intervals over the entire time a tropical storm maintains wind speeds of at least 39 miles per hour. A storm’s ACE Index value accounts for both its strength and duration, but not its size.

“According to the total annual ACE Index, cyclone intensity has risen noticeably over the past 20 years, and eight of the 10 most active years since 1950 have occurred since the mid-1990s,” EPA’s tropical cyclone indicator report says.

EPA admits how hurricane wind speeds are monitored has changed radically over the past 60 years, writing “[o]ver time, data collection methods have changed as technology has improved. For example, wind speed collection methods have evolved substantially over the past 60 years.” As a result, accurately accounting for the ACE values of past storms and fairly comparing them to the ACE values of present storms is virtually impossible.

Using early, nascent ACE measuring technologies, EPA itself admits, “[r]elatively high levels of cyclone activity were also seen during the 1950s and 1960s.” At that time, global average temperatures were declining and many scientists were warning of a coming ice age.

NOAA’s own data show hurricane impacts on the United States are at an all-time low. The United States recently went more than a decade, 2005 through 2017, without experiencing a major hurricane measuring Category 3 or higher, making landfall—the longest such period in recorded history.

This can be seen in Figure 2 below showing the large gap with no major landfalling hurricanes (Category3 or greater) in the U.S. on the right-hand side.

Also from 2009 through 2017, the United States experienced the fewest number of hurricane strikes over any eight-year period, since records have been kept.

EPA’s tropical cyclone report also speculates that climate change will cause hurricanes to become more severe in the future.

EPA’s claim ignores the fact that warm ocean water is only one factor contributing to the formation and intensification of hurricanes. As meteorologist Anthony Watts writes in Climate at a Glance: Hurricanes, “[w]ind shear inhibits strong storms from forming and rips apart storms that have already formed.” Research described in Science Daily shows global warming is likely to cause more wind shear in the very areas where hurricanes form and intensify. “It is misleading to discuss one factor in hurricane formation (warmer oceans) while failing to discuss an equally important factor (wind shear) that diminishes hurricane formation and intensification,” concludes Watts.

More evidence tropical cyclones are unlikely to become more severe in the future comes from recent study published in the peer reviewed journal, Geophysical Research Letters. Its authors report that, after accounting for the combined size and maximum wind speeds of hurricanes—storms’ “kinetic energy”— climate models project no measurable worsening of future hurricanes if the earth continues to warm.

“Comparing cyclone integrated kinetic energy between present conditions and a projected future climate scenario did not suggest notable changes between the two periods,” say the researchers.

EPA’s climate change indicator report on tropical cyclones was on firm ground when it reported climate change has produced no trend of increasing hurricanes. Unfortunately, the value of EPA’s report declined sharply when the agency asserted, contrary to reliable measurements, hurricanes had become increasingly severe due to warming in recent decades.

Neither science’s understanding of the factors that allow hurricanes to form and sustain themselves, nor the available data support EPA’s alarming assertions hurricanes have and will become more powerful amidst modest warming.

The Financial Times and Island Nations Are Wrong – Climate Change...