A recent report citing reef population data from the Australian Institute of Marine Science (AIMS) shows corals on the Great Barrier Reef (GBR) have significantly expanded in number despite repeated bleaching events over the past decade. This good news was treated with a deafening silence by the mainstream media.

The “Long-Term Monitoring Program Annual Summary Report of Coral Reef Condition 2020/2021,” issued by AIMS says, “After a series of severe and widespread disturbances over the last decade, the Great Barrier Reef is currently in a recovery window with coral cover rising in all three regions.” 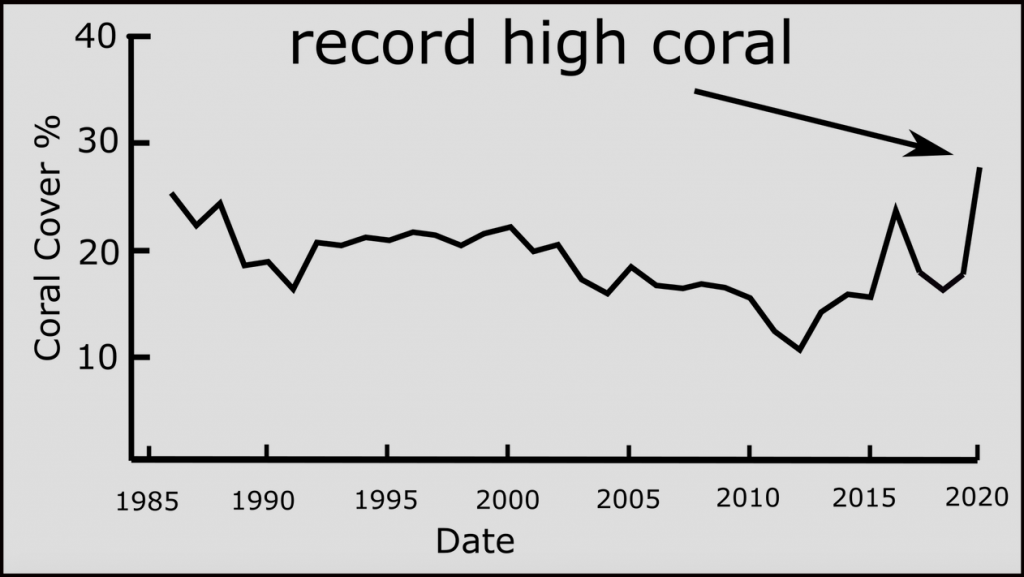 This data series, which started in 1985, is taken yearly by AIMS long term monitoring of the Reef program. Source: Peter Ridd.

Even has the earth has warmed over the past century, AIMS data confirms GBR’s coral growth rates have increased. As physicist Peter Ridd, Ph.D. writes summarizing the AIMS data:

[W]hile there have been three [bleaching] events, they occurred in largely different regions in each year. The reef has thus effectively had one major bleaching event in the past five years and the previous major event was in 2002. So the reef has had roughly one event in 15 years, and most of the coral on the reef did not bleach, and most that bleached did not die.

AIMS’ survey of the reef determined there was “minimal impact” from recent bleaching with hard coral across 85 per cent of the reefs expanding year over year. Seventy-five of the 127 reefs surveyed showed no indication of bleaching.

This report is a direct refutation of headline grabbing claims made by the mainstream media in 2016 that 93 percent of the GBR was dead or dying due to global warming induced bleaching. Subsequent research by AIMS proved that the bleaching in 2016 only affected 22 percent of the GBR, not the 93 percent widely reported by mainstream media outlets. Of the portion of the GBR that did suffer bleaching in 2016, AIMS estimated 75 percent of the bleached portion of the reef would make a full recovery. The GBRs recovery exceeded AIMS projections proving coral are resilient.

As explored in Climate Realism here, the GBR’s expansion mirrors the experience of other coral reefs around the world that the media declared dying due to climate change induced bleaching only to have the corals recover from bleaching events.

Indeed, recently a first of its kind survey of all the coral colonies in the Pacific Ocean found half a trillion corals. According to that study, the eight most common coral species in the region each have a population size greater than the 7.8 billion people on Earth. The lead author of that study, Andy Dietzel, Ph.D., from the ARC Centre of Excellence for Coral Reef Studies at James Cook University, told Phys.org,

“[t]he findings suggest that while a local loss of coral can be devastating to coral reefs, the global extinction risk of most coral species is lower than previously estimated.”

Citing AIMS data, in late-July the United Nations World Heritage Committee (WHR) rejected calls to list the GBR as “in danger.” The WHR’s decision came despite last minute pleas by climate alarmists to ignore AIMS’ report and list the GBR as being threatened with extinction due to climate change.

Sadly, a Google News search of the term “Great Barrier Reef” turns up more stories in the mainstream media decrying WHR’s decision not to list the GBR as “in danger,” than stories covering AIMS report detailing the GBR’s record setting expansion. WHR understood that AIMS’ data indicate climate change is not threatening the GBR with destruction.

That climate change threatens the extinction of coral reefs is among the least well-founded but most persistent assertions made by climate alarmists. To paraphrase Mark Twain, “reports of the Great Barrier Reef’s and other coral reefs’ deaths have been greatly exaggerated.”

The available evidence is clear, the Great Barrier Reef is thriving and is not seriously threatened with extinction by modest warming.

Despite Claims of Great Barrier Reef Decline Due to ‘Global Warming’...

Good News About The Great Barrier Reef Is No News for...