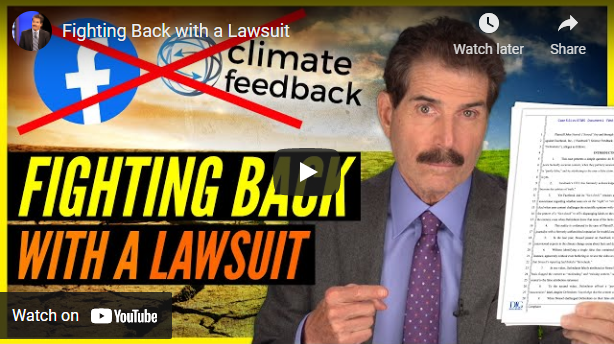 As prize-winning journalist John Stossel notes in his most recent column at Heartland Daily News, Big Tech corporations have lied about his work and censored his videos on climate change. This violates laws against defamation. Consequently, he is taking them to court for redress.

“Facebook does not have a legal right to knowingly and recklessly lie about what I say. That’s defamation,” Stossel writes.

His lawsuit is his way of preventing these parties from doing that to him and others in future.

That means he is fighting for all of us.

I didn’t want to sue. I hate lawsuits. I tried for a year to reach someone at Facebook to fix things, but Facebook wouldn’t.

Here’s the problem: Facebook uses “independent fact-checkers” to try to reduce fake news on their site.

Unfortunately, at least one Facebook “fact-checker” is a climate-alarmist group that cleverly uses its Facebook connections to stop debate.

Facebook is a private company. It has every right to cut me off.

But Facebook does not have the right to just lie about me, yet that’s exactly what Facebook and its “fact-checker” did. That’s defamation, and it’s just wrong.

My video this week shows videos that Facebook throttled.

The defamation started with the fact-checker, a group called Climate Feedback. They didn’t like that my video reported facts suggesting that government mismanagement probably played a bigger role in causing California’s wildfires than climate change.

Climate Feedback got Facebook to censor this as “misleading” and link to a page that still declares the following quote misleading: “Forest fires are caused by poor management. Not by climate change.”

As if that were something I said.

But I didn’t! I never said that.

In fact, I said: “Climate change has made things worse. California has warmed 3 degrees.”

I’ve worked at NBC, CBS, ABC and Fox. All would have fired me if I falsely attributed a quote!

I emailed Climate Feedback’s editor. She didn’t respond. But two of three scientists listed as their “reviewers” agreed to interviews.

Stefan Doerr of Swansea University surprised me by saying he’d never even watched my video!

“If this is implying that we have reviewed the video,” said Doerr, “this is clearly wrong.”

Another reviewer, Zeke Hausfather of The Breakthrough Institute, hadn’t seen the video either. “I certainly did not write a Climate Feedback piece reviewing your segment.”

After he watched it, I asked, “Is [misleading] a fair label?”

“I don’t necessarily think so,” he replied. “While there are plenty of debates around how much to emphasize fire management versus climate change, your piece clearly discussed that both were at fault.”

Still, neither Climate Feedback nor Facebook will change their smear.

Then things got worse. I re-aired a video on climate change myths titled “Are We Doomed?”

Three climate scientists argue that we are not “doomed” because we can adapt to climate change. They invited climate alarmists to debate them. None would.

Climate Feedback got Facebook to throttle that video, too, and declare it “partly false.” Why?

Only one of their reviewers agreed to an interview.

“You’re citing an extreme,” I point out. “The [Intergovernmental Panel on Climate Change] doesn’t consider that likely.”

Climate Feedback also cited my video for questioning the claim that hurricanes have gotten stronger.

But Brown, Climate Feedback’s own reviewer, said, “That’s wrong that you were criticized for saying that. … The IPCC [doesn’t] claim that [hurricanes] … are increasing.”

Later, Brown told us I was cited for “omission of contextual information, rather than specific ‘facts’ being ‘wrong.’”

So, their “fact-check” wasn’t about actual facts?

Facebook has every right to choose who can use its platform.

But Facebook does not have a legal right to knowingly and recklessly lie about what I say. That’s defamation.

I hope my lawsuit will make them think twice about doing it again—to me or to anyone else.

John Stossel is author of “Give Me a Break: How I Exposed Hucksters, Cheats, and Scam Artists and Became the Scourge of the Liberal Media.” For other Creators Syndicate writers and cartoonists, visit www.creators.com.