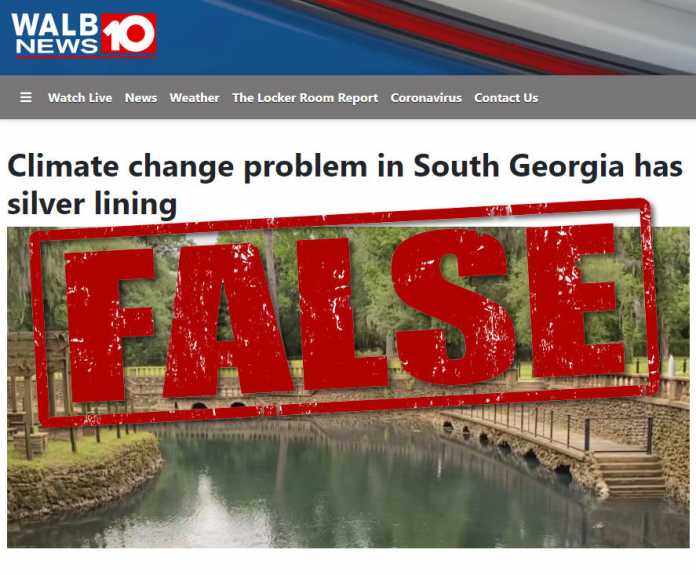 “Radium Springs is dealing with the impacts of climate change,” writes WALB. “Droughts and increased farming withdrawals have both contributed to a low water level.”

The problem is, where there is no drought, there can be no drought induced water shortfalls. WALB’s story is refuted by data from the United Nations Intergovernmental Panel on Climate Change (IPCC) and the U.S. Drought Monitor.

As detailed in Climate at a Glance: Drought, the IPCC reports with “high confidence” that precipitation has increased over mid-latitude land areas of the Northern Hemisphere (including the United States) during the past 70 years, while IPCC has “low confidence” about any negative trends globally.

What’s true for the United States in general is true for Georgia, as well. As seen in the Figure, the Drought Monitor reports not a single county in Georgia is currently experiencing drought.

Looking at past data from the U.S. Drought Monitor website, no part of the state has experienced even moderate drought in more than a year. The last significant drought in Georgia was in 2007, 14 years of “global warming” ago when 49 percent of the state was experiencing some degree of drought.

Contrary to WALB’s claims, data clearly demonstrate that the earth’s modest warming has not resulted in worsening drought in Georgia. Accordingly, any decline in Radium Springs Gardens’ water levels are due to other factors. WALB points to such a factor in its story, increasing water withdrawals for agriculture.

Indeed, unless the Radium Springs has sprung a leak, excessive water withdrawals for agriculture is likely the only reason behind its declining water table. Dougherty County, Georgia where, Radium Springs is located, has experienced a small but steady population decline since 1980.

Climate change is not causing Southern Georgia to run dry. If Radium Springs Gardens is experiencing lower water levels, excessive water withdrawals for farming is the most likely culprit. If so, as WALB rightly reports, the region has the resources and technologies to improve the situation, including expanded water storage and improved water conservation. Implementing policies to prevent climate change would have no impact. If it were being honest, WALB would report this fact.