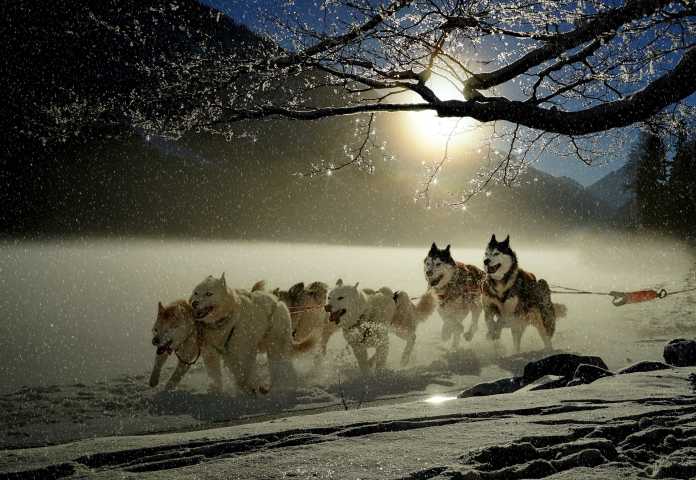 A recent Washington Post article about dogsledding in Michigan claims that human caused climate change has reduced the season for racing due to warmer temperatures and less snowpack. Data show that there is no declining trend of snow cover across North America during the fall and winter seasons.

“Richard Rood, a professor of climate science at the University of Michigan, said that principally because of man-made climate change, Michigan’s cold seasons are different now — and, in portions of southern parts of the state, winters are often wetter.

This may sound like the end of an era, with dogsledding fading away in southern Michigan as the snow edges north.

Prognostications that the “end of snow” is near have been made ad nauseum over the past three decades, and they’ve all proven wrong. As discussed in by Climate Realism, predictions of declining snowfall always depend on model projections. Real world data on measured snowfall and trends refute these fear mongering claims. Just this year, for example, the National Oceanic and Atmospheric Administration (NOAA) predicted the maximum ice cover in the Great Lakes would barely reach 13 percent. Reality rebuffed NOAA’s modelling, when ice coverage peaked at almost 60 percent coverage, as seen in Figure 1 below.

High ice years on the Great Lakes are not only still possible, but have occurred regularly, including recent years of near record-breaking ice coverage. As shown in the Figure 2 below, NOAA’s Great Lakes Surface Environment Analysis (GLSEA) data shows only a minor decline in ice coverage since 1975.

Snowfall in that region is tied closely to the Great Lakes’ ice coverage, due to the “lake effect”. Lake effect snow is reduced during years of high ice cover, as less lake water can evaporate into the West to East wind to create snow because of the ice cap over the water. Ice coverage on the Great Lakes is weather dependent: as can be seen in the Figure 2 above, there are wide swings from year to year. This is a weather related event, not climate; colder winters in the Great Lakes lead to less snow.

There may be a local reduction of snow in some parts of Michigan, but data from the Global Snow Lab at Rutgers University, demonstrates that the average snow extent in North America has increased during the fall and winter over time, refuting the claim that snow is “edging north.” This data is reflected in Figures 3 and 4 below.

Interestingly, even the study Washington Post cites says that while the average temperature of Michigan has raised by about 2 degrees Fahrenheit since 1951, it also says Michigan should see snowier winters in the near term due to the lake effect.

Reduced lake ice cover and enhanced evaporation may lead to increased lake-effect snowfall in the near term, but rising temperatures will cause more winter precipitation to fall as rain as opposed to snow across the region by late century.

Annual average ice cover on the Great Lakes underwent a shift from higher amounts prior to the 1990s to lower amounts in recent decades. There remains strong year-to-year variability, and high ice years are still possible. Lake-effect snowfall has increased in northern areas and may continue to increase through mid-century.

Based on available data, there is no cause to fear for the future of dogsledding, especially in northern Michigan. The Washington Post cherry-picked statements from a study, and ignored the rest. Journalists should avoid attributing every ephemeral, likely temporary, change in local weather to global warming aka “climate change”.