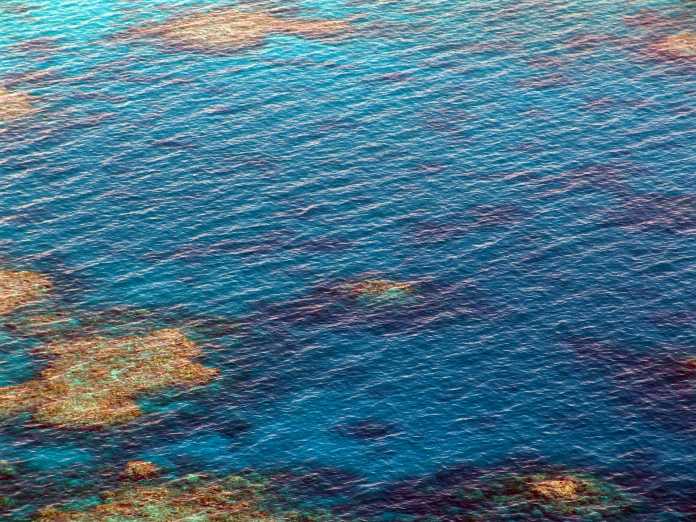 The Washington Post (WaPo) published an article today discussing the fact that Australia’s Great Barrier Reef (GBR) recently suffered its “sixth massive bleaching event,” blaming it on climate change. The evidence that long-term climate change, as opposed to a short-term fluctuation in ocean temperatures, is to blame for the present bleaching event is limited. Also, the WaPo presents no evidence of a tipping point. Indeed, based on past bleaching events, reports of the extent of the current bleaching are likely overstated. What is clear from the history of the GBR is that most of the coral that suffered bleaching are likely to recover.

In a WaPo article titled, “Climate warming has dealt yet another blow to the Great Barrier Reef,” Darryl Fears writes:

Australia’s Great Barrier Reef is experiencing its sixth massive bleaching event as climate change has warmed the ocean, raising concerns over whether one of the world’s natural wonders is nearing a tipping point.

Unusually high ocean temperatures, up to 7 degrees Fahrenheit above normal, probably triggered the event. It is the sixth massive bleaching the reef has suffered in two decades, and the fourth since 2016. Back-to-back bleaching events in 2016 and 2017 affected two-thirds of the world’s largest reef.

Data does not support WaPo’s claims about the extent of previous bleaching events in the GBR. Although some scientists widely quoted in corporate media reports on the 2016 bleaching event claimed 93 percent of the GBR suffered bleaching in 2016, subsequent research from the Australian Institute of Marine Science (AIMS) showed just 22 percent of the reef had bleached with AIMS estimating more than 75 percent the bleached coral would recover. As discussed in Climate Realism, AIMS’ survey determined there was “minimal impact” from the 2016 bleaching with hard coral across 85 percent of the reefs expanding year over year.

Indeed, rather than recent bleaching events indicating corals might be approaching a tipping point for the collapse of the reef, AIMS’ survey showed, as late as August 2021 corals were at a historic high for numbers. AIMS reported  “Hard coral cover increased across all three regions (Northern, Central, and Southern) and most reefs surveyed had moderate or high coral cover. Overall, 59 out of 127 reefs had moderate (>10% – 30%) hard coral cover and 36 reefs had high (>30% – 50%) hard coral cover.” (See the figure below) 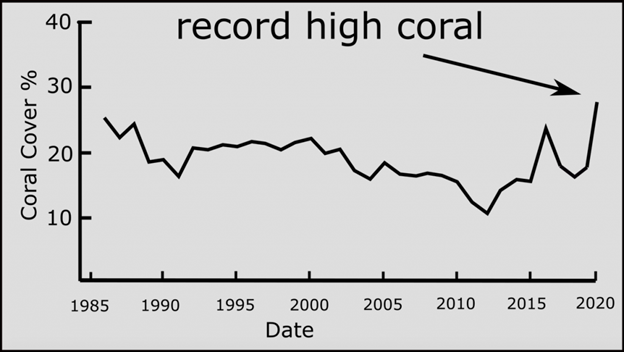 Citing AIMS’ data, in late-July the United Nations World Heritage Committee (WHR) rejected calls to list the GBR as “in danger.” The WHR’s decision came despite last minute pleas by climate alarmists to ignore AIMS’ report and list the GBR as being threatened with extinction due to climate change.

The present bleaching may be due to unusual temperature conditions in the oceans surrounding Australia. However, climate change can’t have been responsible for the six bleaching events that occurred over the past 20 years because there has been no long-term temperature increase in the seas around Australia. As discussed by meteorologist Anthony Watts, reporting on recent research, Bill Johnston, Ph.D., a former New South Wales Department of Natural Resources research scientist, Johnston compared temperature data from 1871 to recent data derived from 27 Australian Institute of Marine Science data loggers in a reef area where recent bleaching events occurred.

No difference was found between temperatures measured at Port Stephens and Cape Sidmouth by astronomers from Melbourne and Sydney using bucket samples in November and December 1871 and data sampled at those times from 27 AIMS datasets spanning from Thursday Island, in the north to Boult Reef in the south. Alarming claims that the East Australian Current has warmed due to global warming are therefore without foundation.

If there has been no long-term average warming of the seas containing the GBR, warming can’t be threatening the GBR’s survival.

Indeed it would be surprising if warmer waters did pose a threat to the GBR or other coral reefs around the world. Coral have existed continuously for the past 40 million years, adapting to often abrupt and significant temperature shifts repeatedly. Historically, coral have thrived during periods when ocean temperatures were significantly warmer than they are today.

Coral require warm water, not cold water, to thrive and survive. They are unable to live and colonize outside of tropical or subtropical waters. As a result, as the Earth has modestly warmed, coral are extending their range toward the poles while still thriving at and near the equator.

Coral reefs are natural marvels, providing unique habitat for abundant sea life and contributing the health of the oceans. No coral reef is more justifiably famous than the GBR. Fortunately, as recoveries from previous bleaching events show, contrary to the demise of the GBR implied by WaPo as a result of the recent bleaching which it blames, without providing a scintilla of evidence, on human caused global warming, the majority of the corals bleached this year is likely to recover.

Fears should stop promoting climate fear and put the present bleaching in the wider context of history and science. Corals have proved adaptable and resilient across the millions of years of their existence. There is no reason for believing they can’t adapt to modest warming, should it continue.