A search of Google news for the phrase “climate change” today reveals a story in the global produce newsletter, Fresh Plaza, claiming climate change is harming mango production in Pakistan. This is false. Data show, despite the normal ups and downs tied to yearly weather and market conditions, during the past 30 years of modest warming mango production in Pakistan has grown substantially, setting new records multiple times.

There are so many mistakes and misunderstandings contained in this story, it is hard to know where to begin in critiquing it. First, as any farmer can attest, crop production can vary wildly from year to year. As explained at Climate Realism, here and here, for example, climate change is measured in 30 year increments. One can only determine that the climate has changed if weather patterns and trends have significantly shifted over a 30 year period. Neither a single year’s weather incidences nor a single year’s crop production is evidence of climate change. Weather is not climate.

Second, concerning unusual cold spells, the U.N. Intergovernmental Panel on Climate Change’s 6th Assessment Report says the agency has been unable to detect any increase in spells of extreme cold, hail, or winter storms that it can attribute to human caused climate change.

Third, and most importantly, data show no indication Pakistan’s mango production has suffered during the recent 30 year period of modest warming. 2022’s predicted very bad year of mango production is an anomaly. Data from the United Nations Food and Agriculture Organization show that from 1990 to 2020 mango production in Pakistan increased by more than 206 percent, setting new records 17 times during that time period. (See the figure below). 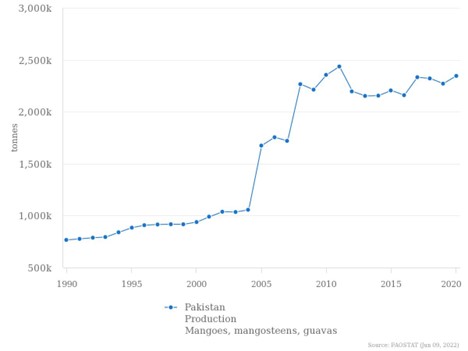 Although it may make for good headlines, selling the alarming narrative that humans are causing dangerous climate change, one bad crop year does not a climate disaster make. Pakistan may experience a bad mango harvest this year, but agronomy and botany indicate that higher carbon dioxide levels and modest warming should reduce the incidences of late season frost and below freezing nights, improve rainfall patterns, and significantly increase mango yields over time. In short, the evidence suggests the future for mango production in Pakistan is bright.