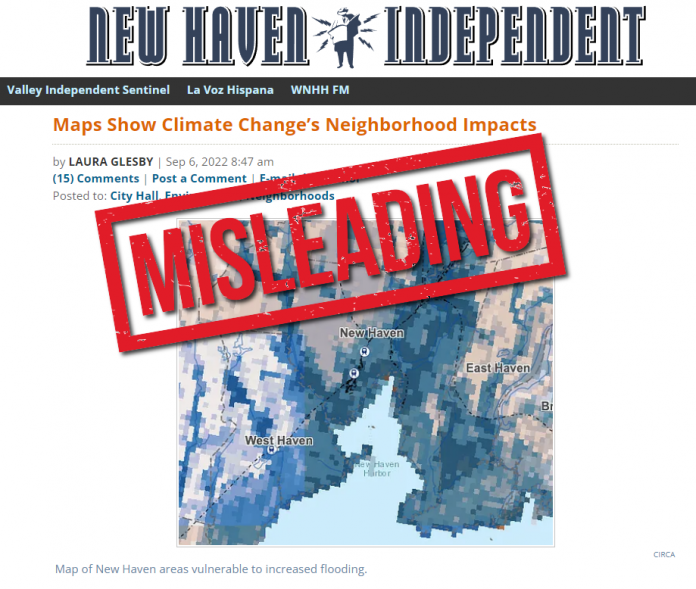 The Independent reported on a presentation made to the New Haven Board of Alders City Services and Environmental Policy committee, by John Truscinski, director of resilience planning at the Connecticut Institute for Resilience and Climate Adaptation (CIRCA), an affiliate of the University of Connecticut. Truscinski ‘s presentation outlined how computer models predict changing weather and water patterns will affect various parts of the city. If carbon dioxide emissions remain high, CIRCA predicts that by 2050 in Connecticut:

* The number of days with a high temperature warmer than 77 degrees will increase from about 81 per year to 118 per year.

* The number of nights with a low temperature warmer than 68 degrees will increase from about 10 per year to about 40 per year, and about 70 per year later in the century.

* Days with a high temperature warmer than 90 degrees will increase from about 5 per year to about 25 per year.

* Day[s] with a high temperature warmer than 100 degrees will increase from about 1 per year to about 4 per year.

Other CIRCA claims parroted in Glesby’s article concerned flooding. According to Truscinski, CIRCA’s analysis indicates a minor flooding, meaning “flooding of one to two feet about four times per year,” in New Haven, would become a permanent feature of the city.

“‘Major’ flooding events with greater than three feet of water, which can cause significant damage, currently occur every 15 to 20 years,” Truscinski said. “In the future, New Haven can anticipate major floods every three to five years.”

Truscinski said that each of these changes would come to pass in just 28 years. Had Glesby exercised a little critical judgement and fact-checked Truscinski’s claims she would have found every prediction Truscinski made is based on projections from a computer model that is notably flawed. Computer models indicate temperatures at present levels of carbon dioxide should be hotter than they in fact are, and that flooding should be greater than it, in fact, is. Measured data refute the temperature and flood trends simulated in CIRCA’s computer models.

For example, Trucinski’s flooding claims are based on this image depicting computer model scenarios of sea-level rise. (Figure 1 below).

Real world data from the National Oceanic and Atmospheric Administration (NOAA) from the nearest tide gauge in Bridgeport, CT suggests these model projections are all wet. With data going back to 1965, the trend is just 3.14 millimeters per year of sea level rise. (See Figure 2, below) Simple math tells us, based on the actual trend, sea levels should be expected to rise by 3.46 inches by 2050 (3.14 mm/year x 28 years = 87.92mm or 0.29 feet). This is far below CIRCA’s “best case” scenario of 1.5 feet of rise by 2050.

In order for CIRCA’s predictions to come to pass for even the best-case 2050 scenario, the rate of sea level rise would have to increase by five times the current measured rate.

Bridgeport’s sea level data in the area show no indication they have accelerated to any appreciable degree in recent decades. CIRCA’s worst-case scenario by 2050 of 2.5 feet rise, is even more far-fetched. The rate of sea level rise would have increase at 8.5 times the current rate. Given that sea level rise has been steady since 1965, this seems not just highly unlikely, but practically impossible.

Figure 3, below, is a graph of the hottest months of the year, June, July, and August, aka “summer,” plotted from NOAA’s official historical data.

The green trend line in the graph shows that there has been a slight upwards trend in Connecticut’s summer temperatures since about 1970. This tracks the growth of the state’s population since that time. As population grows, so does energy use and supporting infrastructure. These contribute to something known as the Urban Heat Island effect (UHI), which is a proven cause of measured warmer temperatures.

In Figure 4, provided by the Connecticut State Comptroller’s office, the growth of population closely mirrors the temperature rise since 1970.

CIRCA computer climate model projections are wildly inaccurate because they fail to take all of the available actual data into account. In science, when theory and data diverge, one is supposed to follow the data, not cling to a theory. Climate model output is not data, but a mathematical guess based on programmed assumptions.

Rather than listen to climate change grant-seekers like CIRCA, the City of New Haven might want to follow the advice that many people follow when they are diagnosed with a problem: get a second opinion. And for the Independent and Glesby, before uncritically publishing climate alarmists’ pap, they should follow the principles of good journalism and check the facts.