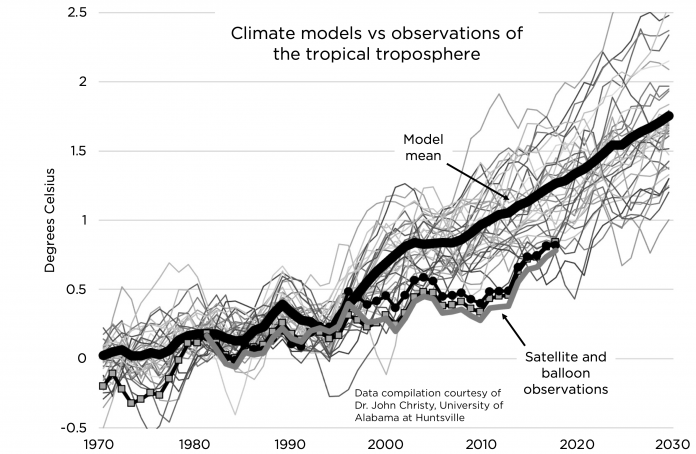 Editor’s Note: Judith Curry writes an analysis on the beginning of a shift in coverage of climate change, as more scientists in the climate debate have begun to admit that the warming predictions associated with Representative Concentration Pathway 8.5 (RCP8.5) are implausible. Climate Realism has covered this issue before, in posts here, here, and here, among others, amid the publication of multiple peer-reviewed studies that refute alarmist claims of impending runaway global warming.

Growing realization by the climate establishment  that the threat of future warming has been cut in half over the past 5 years.

Summary:  The climate “catastrophe” isn’t what it used to be. Circa 2013 with publication of the IPCC AR5 Report, RCP8.5 was regarded as the business-as-usual emissions scenario, with expected warming of 4 to 5 oC by 2100. Now there is growing acceptance that RCP8.5 is implausible, and RCP4.5 is arguably the current business-as-usual emissions scenario. Only a few years ago, an emissions trajectory that followed RCP4.5 with 2 to 3 oC warming was regarded as climate policy success. As limiting warming to 2 oC seems to be in reach (now deemed to be the “threshold of catastrophe”),[i] the goal posts were moved in 2018 to reduce the warming target to 1.5 oC. Climate catastrophe rhetoric now seems linked to extreme weather events, most of which are difficult to identify any role for human-caused climate change in increasing either their intensity or frequency.

The main stream media is currently awash with articles from prominent journalists on how the global warming threat is less than we thought.  Here are some prominent articles:

David Wallace-Wells is one of the most interesting journalists writing in the climate space.  In 2017, he wrote  a 2017 New York Magazine article titled “The Uninhabitable Earth”, with subtitle: “Famine, economic collapse, a sun that cooks us: What climate change could wreak—sooner than you think.”  Not long after publication of his book in 2019 entitled The Uninhabitable Earth, David Wallace-Wells made this statement: “Anyone, including me, who has built their understanding on what level of warming is likely this century on that RCP8.5 scenario should probably revise that understanding in a less alarmist direction.” DWW scores HUGE number of points with me for quickly adjusting his priors with the growing amount evidence that RCP8.5 is implausible.

Well, the “messaging” around DWW’s latest article is that we are succeeding with reducing emissions (no we are not).  The second message is to acknowledge that that warming will be less than we thought, but the impacts of the warming will be worse than we thought (nope).  The third message is that advances in science have brought us to this (relatively) happy place (nope)

At the heart of this good news is abandonment of RCP8.5 from UNFCCC policy making. The hero of science behind this abandonment is Justin Ritchie, a recent Ph.D. graduate (whose work has been cited in previous RCP8.5 posts at Climate Etc).

The COP26 and now the COP27 have quietly dropped RCP8.5 (and SSP5-8.5) from their considerations, focusing on the envelope between RCP4.5 and RCP2.6.  The grand poohbahs of the IPCC apparently didn’t see this coming (or preferred to keep spinning the alarm), since they instructed climate modelers for CMIP6 to continue a focus on SSP5-8.5, and climate researchers continue to focus on this scenario in their impacts publications.  The IPCC AR6 prominently featured SSP5-8.5, although WGI did make this lukewarm statement:

“In the scenario literature, the plausibility of the high emissions levels underlying scenarios such as RCP8.5 or SSP5–8.5 has been debated in light of recent developments in the energy sector.”

Read the rest at Climate Etc.

Judith Curry is the host of Climate Etc. She is also President (co-owner) of Climate Forecast Applications Network (CFAN).  She was also once Professor and Chair of the School of Earth and Atmospheric Sciences at the Georgia Institute of Technology.