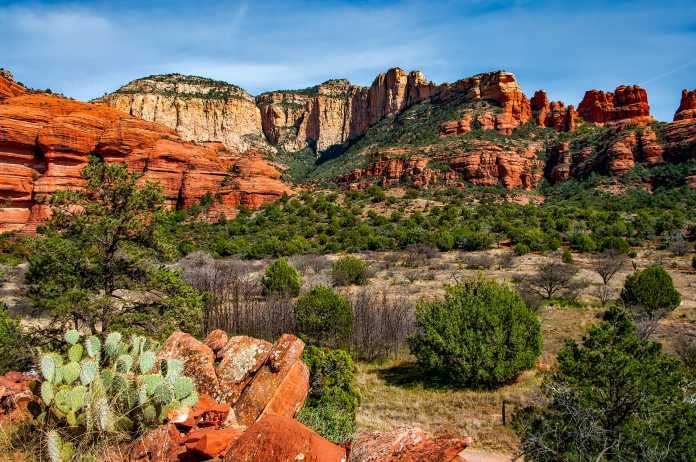 The new study, published in Science, is titled “Anthropogenic megadrought.” The title alone suggests this is more of an opinion piece than a work of science.

In the abstract of the paper, author David Stahle claims evidence shows:

“…that the 16th-century megadrought was the worst multidecadal drought episode in the Southwest over the past 1200 years, and that the second-worst event occurred from 2000 to 2018 over southwestern North America (SWNA) and may be ongoing. The study also pinpoints substantial anthropogenic (human) contribution to the severity of the current drought.”

That sounds quite conclusive, and media stories from the Associated Press, USA Today, Washington Post, New York Times, and many others are uncritically distributing the claim made by the paper and its sole author.

Is the USA in a “megadrought”? Looking at April 14th 2020 data from the United States Drought Monitor, it sure doesn’t seem so. While there are indications of some drought in the USA Southwest, there seem to be equally large areas that have no drought conditions at all. And, just one year ago, there were no indications of drought in the southwest USA whatsoever. This might be why Stahle only used data through 2018, because the “no drought” year of 2019 didn’t support the claims of “megadrought”.

Using a tree-ring-based drought record from the years 1000 to 2005 and modern records, scientists from NASA and Lamont-Doherty Earth Observatory found the 1934 drought was 30 percent more severe than the runner-up drought (in 1580) and extended across 71.6 percent of western North America. Looking at the USA drought monitor map for summer 1934 and summer 2019, the difference becomes clear.

Another study suggests that the 1934 dust-bowl drought didn’t even make the top 10 in terms of severity, and another found a “megadrought” in the Southwest USA during the time of the Roman Empire.

With that historical data, it is impossible to claim our use of fossil fuels in the last century is leading to a new megadrought.

Here’s the punch line; the notion that the Anthropogenic megadrought paper published by Stahle is flawed is perfectly illustrated by a single chart also using tree ring data from the Western USA.

The chart above uses data from the 2007 E.R.Cook et al. study  showing severe droughts lasting as long as 200 years going back to 1200 years ago. Meanwhile, at the far right, the drought we’ve experienced in the 21st century is clearly evident and miniscule by comparison.

Clearly there have been long-lasting severe droughts in the Western USA long before “man-made climate change” became a social cause célèbre of the left. It is even clearer that the current claim of an impending megadrought is simply the questionable opinion of one scientist that has been serially and uncritically regurgitated by the mass media.