At the top of Google News searches today for “climate change,” an article published by the liberal website Pro Publica claims global warming during the next few decades will force millions of Americans from warm southern states to cooler states. A look at state population patterns, however, shows exactly the opposite is happening. Even with our modest recent warming, more Americans prefer to move to warmer southern states than colder northern states.

The Pro Publica article, titled “Climate Change Will Force a New American Migration,” claims “1 in 12 Americans in the Southern half of the country will move toward California, the Mountain West or the Northwest over the next 45 years because of climate influences alone. … It will eat away at prosperity, dealing repeated economic blows to coastal, rural and Southern regions, which could in turn push entire communities to the brink of collapse. This process has already begun in rural Louisiana and coastal Georgia….”

So, according to the article, people moving from one part of the country to another to seek a better climate is disastrous and puts whole communities on the brink of collapse. If that is indeed the case, perhaps we should do something about it.

A map published, ironically, by the liberal, climate alarmist website Daily Kos illustrates how Americans are reacting to climate by seeking warmer, not colder, temperatures. As shown in the Daily Kos map below, U.S. Census Bureau data show Texas will gain the most congressional seats in the 2020 Census update. Florida will gain the second-most seats. Texas and Florida are the two southernmost states in the contiguous 48 states. Other states expected to gain seats are hot-weather Arizona, warm-weather North Carolina, climate-neutral Colorado, climate-neutral Oregon, and cold-weather Montana (largely due to people fleeing liberal California). 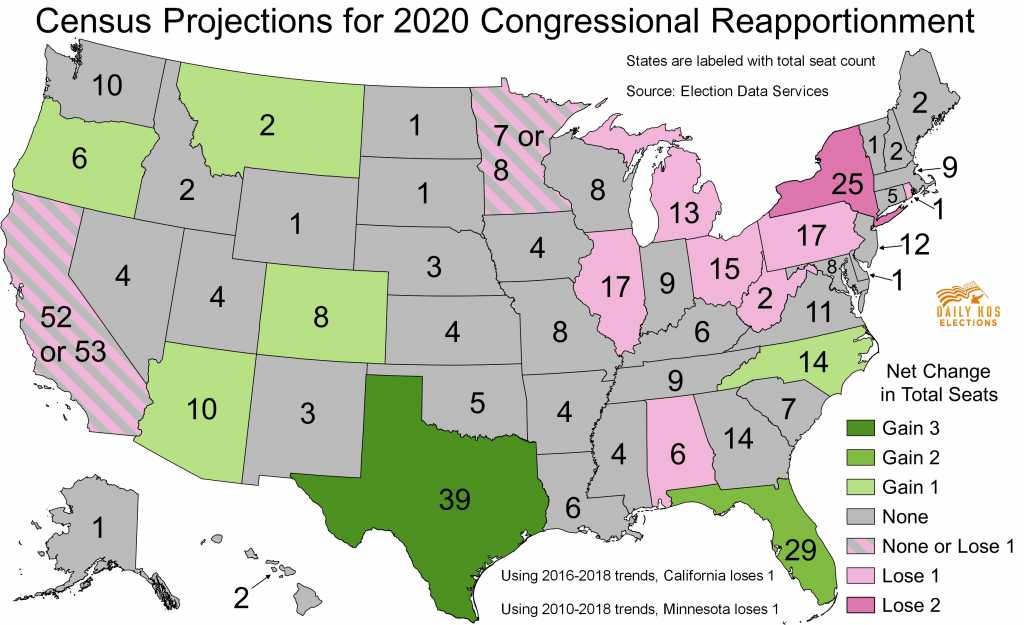 By contrast, eight of the 10 states expected to lose seats are cold, northern states. One of the others is California, where people are fleeing liberal state government. Alabama is the only warm-weather state expected to lose a congressional seat. Contrary to the Pro Publica article, Louisiana and Georgia will not lose any seats.

As the population data clearly show, if global warming will have any impact on U.S. interstate migration – which climate alarmists claim is inherently harmful – it will be to slow the existing migration flood from cold northern states to warm southern states.

Yet another objective, clear benefit of our ongoing modest warming….