A recent search of Google news for the term “climate change’ turns up a story published in Rising Kashmir saying climate change threatens crop production across the multi-country region of Kashmir, necessitating “innovative interventions” to feed the region’s growing population.

In fact, evidence shows crop production has boomed in the countries containing the Kashmir region, as well as in adjacent nations, during the recent period of modest warming. Innovative interventions in agriculture combined with rising carbon dioxide levels to spark a green revolution in agriculture delivering millions of people around the world from hunger over the past 50 years, and will be welcome going forward. However, climate change isn’t necessitating their development for the people residing in and around Kashmir.

Population growth rates globally have so outstripped the linear rate of increases in food production that the Food and Agriculture Organization of the United Nations (FAO) estimated that 70 percent more food must be produced over the next four decades in order to nourish adequately a human population projected to exceed 9 billion by the year 2050.

Ahmad is correct the FAO has said the world will need more food to meet the desires and nutritional requirements of the world’s growing population, but he is incorrect when he says population growth has outstripped supply. Indeed, the rate of population growth has fallen steadily over the past half-century while crop yields and production have grown markedly.

Although 700 million people worldwide still suffer from persistent hunger, the United Nations reports the number of hungry people has declined by two billion people since 1990. This is the largest decline in hunger in human history. In addition, research shows there is now 17 percent more food available per person than there was 30 years ago — all during the period of purportedly dangerous climate change.

“The inherent difficulties in achieving this unprecedented increase are exacerbated by the yield-depressing consequences of climate change and variations and by the pressures on food supply by other competing demographic and socioeconomic demands,” Ahmad also writes. Data show this claim is as flawed as his claim that population growth has outstripped food production.

Meticulously compiled data from the U.N.’s Food and Agriculture Organization (FAO), show during the period of recent warming, since 1988, food production has increased dramatically in each of the nations adjacent to or exercising political authority over the Kashmir region. India, Pakistan, and China each exercise political authority over portions of the historic Kashmir. Bangladesh, Nepal, and Tajikistan are adjacent to or share a history with Kashmir. The FAO reports each of these countries have experienced substantial, multiple record-setting gains, in cereal crop production since the specter of global warming was first visibly raised by NASA scientist James Hansen at a Senate hearing in 1988. As seen in the figure below, between 1988 and 2020: 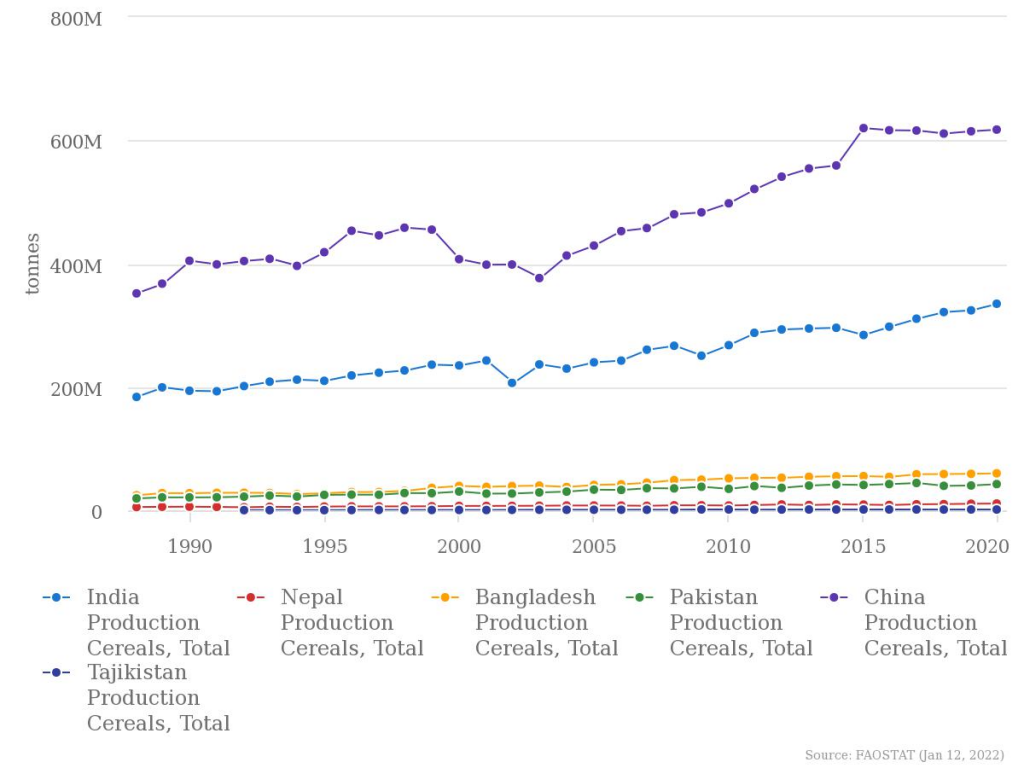 The evidence is clear, crop production has increased dramatically in the Kashmir region as the planet has modestly warmed. Dr. Ahmed and Rising Kashmir are wrong to imply otherwise. There is no evidence climate change is suppressing or disrupting crop production in Kashmir or anywhere else in the world.