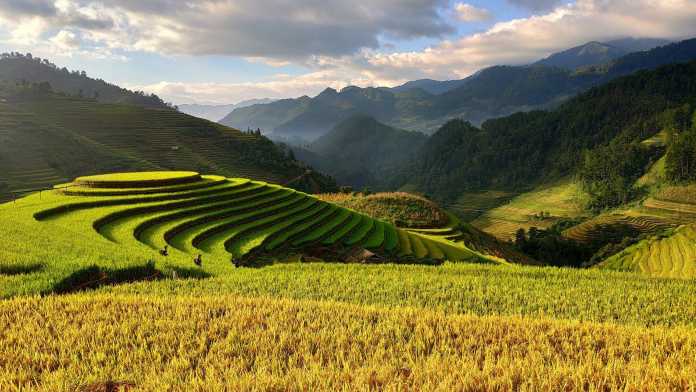 A story in Wired claims climate change is harming crop yields. Nothing could be further from the truth. Data shows crop production and yields have grown substantially during the recent period of modest warming, setting new records nearly every year.

Wired’s story titled, “Climate Change Is Taking a Big Bite out of Our Food Supply,” references an alarming report issued by the United Nations Intergovernmental Panel on Climate Change (IPCC) last week to claim climate change threatens global food supplies, appallingly trying to make the story relevant by linking it to Russia’s invasion of the Ukraine.

With its siege on neighboring Ukraine, Russia has embroiled two of the world’s five leading wheat exporters in a chaotic war, representing about a quarter of the global trade in staple grain. Not surprisingly, global wheat prices surged during the first few days of the invasion.

Geopolitical shocks like Russia’s attack on Ukraine fall upon a global food system already wobbling from climate change, according to the latest report released on Monday by the Intergovernmental Panel on Climate Change, the United Nations’ assemblage of 270 researchers from 67 countries.

The IPCC and Wired should have checked their facts. War and geopolitical strife can hamper food production, but even in the face of wars, revolutions, and border disputes, over time, rather than declining 5.3 percent, staple crop yields have risen markedly over past six decades. This represents truly shoddy reporting, unless Wired’s goal was not to inform, but to scare its readers.

Citing the copious data compiled by the the United Nations Food and Agriculture Organization, Climate Realism has published more than 120 stories over the past two years exposing claims that crop production is declining due to global warming as lies. The articles, covering a range of crops and regions of the earth, tell a consistent story of higher production and improved yields.

Whereas the IPCC and Wired claim global warming has lowered production of the “big three” staple crops, corn, wheat, and rice, FAO data show just the opposite. 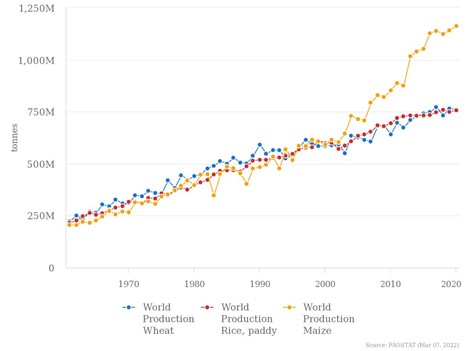 The evidence shows production increased, not because farmers devoted more land to crop production, but because yields rose, at least in part due to higher carbon dioxide concentrations. The FAO reports, between 1961 and 2020(see the figure 2, below): 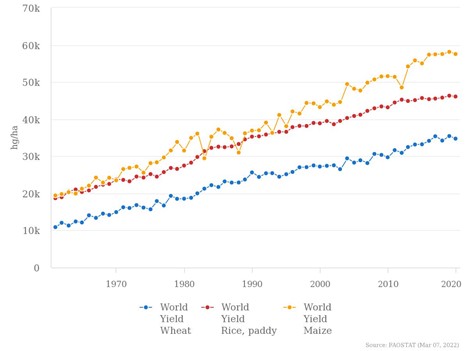 Agronomy explains why crops production is booming under current climate conditions. As detailed by the Non-governmental International Panel on Climate Change in Climate Change Reconsidered: Biological Impacts and Climate Change Reconsidered II: Fossil Fuels, the carbon dioxide humans have been pumping into the air since the middle of the 20th century has enriched plant growth and improved plants’ water use efficiency, thereby contributing to record crop yields. This aided in bringing about the largest decline in hunger, malnutrition, and starvation in human history.

With the evidence being so clear, one can only speculate why the IPCC reported flawed data and why Wired didn’t do a little fact checking on their numbers. Regardless of their motives, their claims about the impact of climate change on crop production are nothing better than manure. Crops are doing well and people are benefitting.