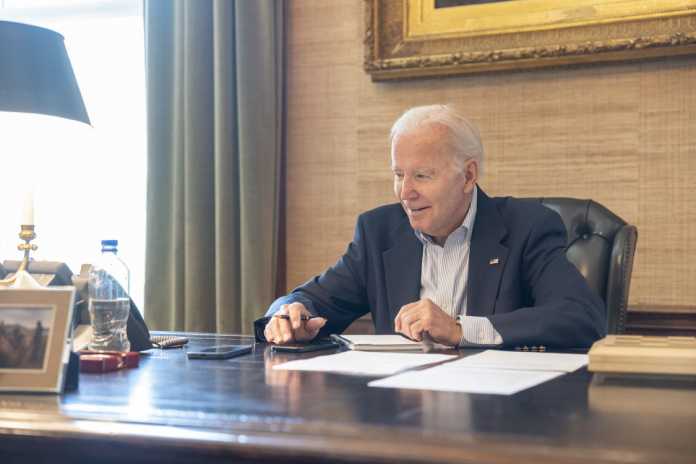 Large corporate and local media outlets alike, CNN, The Weather Channel, CBS News, The Washington Post, and the Associated Press, to name just a few, covered President Joe Biden’s “Climate Emergency” speech delivered in Somerset, Massachusetts. The stories almost uniformly focused on the executive actions Biden was announcing to counteract climate change, which he alternately called a “clear and present danger,” and an “emergency—” the latter repeatedly. Biden announced programs to fight climate change, like providing billions of dollars in taxpayer subsidies to weatherize homes and waiving regulations to expedite the building of offshore wind farms. The press ignored the scientifically testable claims Biden made which he said justified calling climate change an emergency and government efforts to fight it. Biden claimed that climate change had made hurricanes, tornadoes, droughts, and wildfires worse. Data proves each of these assertions is false.

Ravaging hundred-year-old droughts occurring every few years instead of every hundred years. Wildfires out west that have burned and destroyed more than 5 million acres — everything in its path.

Each of Biden’s claims about the worsening of extreme weather events is refuted by real world data collected by the U.N.’s Intergovernmental Panel on Climate Change and the U.S. government’s own agencies.

There is no scientific evidence linking climate change to any trend in tornadoes. Concerning tornadoes, the IPCC writes, “[t]here is low confidence in observed trends in small spatial-scale phenomena such as tornadoes.” What collected data show is that the number of tornadoes in the United States and globally has declined over the past 45 years. Simultaneously, the number of strong to violent tornadoes, EF3 or higher, has been dramatically declining for the past 45 years. (See Figure 1.) 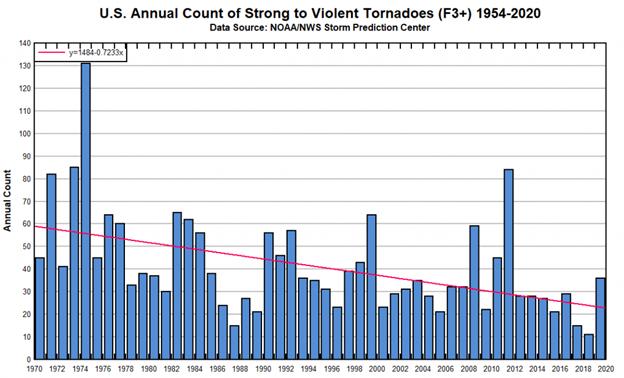 Biden’s assertion that climate change is causing more damaging hurricanes is just as false as his claim about tornadoes. Concerning hurricanes the IPCC has stated, “there is only low confidence for the attribution of any detectable changes in tropical cyclone activity to anthropogenic influences.” Indeed, as explored in dozens of Climate Realism posts, here, here, and here, for example, rather than showing a trend of increasing hurricanes as the Earth has modestly warmed, the number of hurricanes and their intensity have either remained flat or actually declined. Recent studies, two of which were published in separate peer reviewed journals published by Nature, confirm this fact.

Biden is just as wrong concerning drought and wildfire trends.

Data show the present drought waxing and waning across much of the Western United States is nowhere near as severe or long-lasting as those experienced with some regularity in America’s past. Indeed, as recently as 2017 and again in 2019, the United States set records for having its smallest percentage of land area experiencing drought conditions.

Hard data thoroughly debunks Biden’s claims that climate change is causing worse wildfires, as well. Data on wildfires presented in Climate at a Glance: Wildfires, from the U.S. National Interagency Fire Center from as far back as 1926 show current acres burned in the United States, are approximately 1/4th to 1/5th of the amount burned annually in the 1930s.

What is true of the United States is true for the world in general. For instance a study published in the peer-reviewed Journal of Geophysical Research analyzing global wildfires back to the year 1901 reported “a notable declining rate of burned area globally.” NASA satellites have also documented a global long-term decline in wildfires, with the agency measuring a 25-percent decrease in global lands burned since 2003. These are objective scientific facts.

President Biden’s performances in his carefully staged speeches from his home where he isolated when running for President, and the faux pas he has often made during his public appearances since becoming President, like reading stage directions straight from a teleprompter or turning to shake hands with non-existent people on stage, are a strong hint of cognitive impairment. As such, one can forgive Biden for extemporaneously blurting out he has cancer, which he blamed on air emissions from a refinery located near his home during his youth. Biden regularly makes mistaken claims when he goes “off script” from the carefully tailored remarks prepared by his handlers. The White House press corps scrambled to clarify that Biden does not have cancer, but was referring to multiple melanomas he had removed before becoming President.

One can presume it was just an exited utterance or hyperbole when he linked his skin cancers to refinery emissions. Medical science hasn’t linked refinery emissions to skin cancer and at the time doctors removed the melanomas they attributed them to Biden “spend[ing] a good deal of time in the sun in his youth.”

The climate science falsehoods Biden made in his speech were not so innocent, rather they were direct statements contained in his official speech. Unfortunately for the propagandists, Biden’s denial of science on the issue of climate is testable. Data proves that the President was wrong to assert that extreme weather is becoming more common and severe. Contrary to his statement, climate change is no “Code Red for Humanity.” Whatever reasons the federal government might have for weatherizing homes, building expensive off-shore wind turbines, or any of the other climate orders Biden indicated he would make in the coming weeks, threats from climate change provide no justification for them.