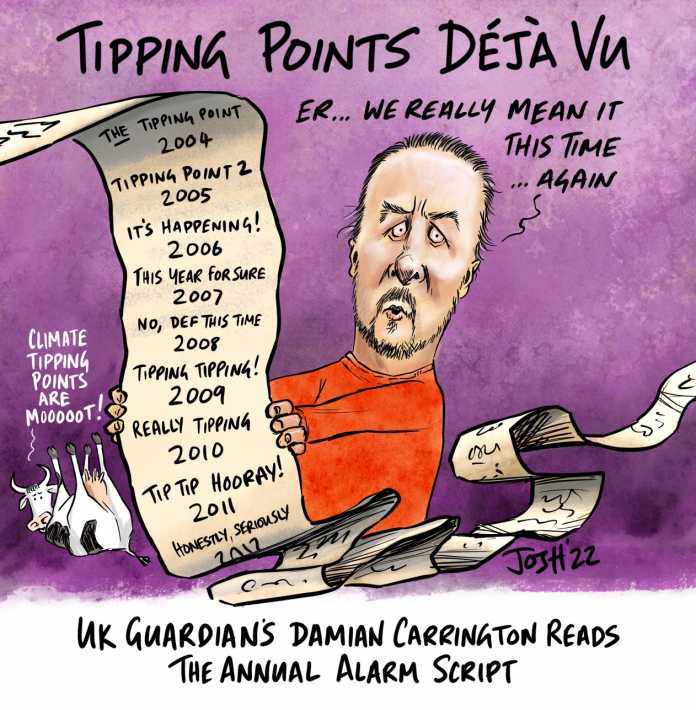 Following the publication of story in The Guardian by Damian Carrington last week, titled, “World on brink of five ‘disastrous’ climate tipping points, study finds,” numerous corporate media outlets picked up the theme and ran their own stories. Based on a single study, titled “Exceeding 1.5°C global warming could trigger multiple climate tipping points,”  The Guardian and many other news outlets wrote stories treating the study’s speculative claims as proven, although they couldn’t agree on the number of tipping points: The Guardian said five, the BBC said six, and Grist says seven. CBS News, erring on the conservative side, says four.

The climate crisis has driven the world to the brink of multiple “disastrous” tipping points, according to a major study.

It shows five dangerous tipping points may already have been passed due to the 1.1C of global heating caused by humanity to date.

These include the collapse of Greenland’s ice cap, eventually producing a huge sea level rise, the collapse of a key current in the north Atlantic, disrupting rain upon which billions of people depend for food, and an abrupt melting of carbon-rich permafrost.

At 1.5C of heating, the minimum rise now expected, four of the five tipping points move from being possible to likely, the analysis said. Also at 1.5C, an additional five tipping points become possible, including changes to vast northern forests and the loss of almost all mountain glaciers.

In point of fact, in the study cited by the media, the researchers used computer models to calculate 16 tipping points, with the final six requiring global temperature increase of at least 2°C to occur. According to the scientists’ computer model estimates, the tipping points would take effect on timescales varying from a few years to centuries.

Note the word “could” in the title of the original article, and the timeline uncertainty. In other words, the scientists made a guess. And, importantly, the guess is based on computer models that are known to be flawed, rather than real-world, measured, evidence.

We’ve been warned of climate tipping points before, so much so that they’ve racked up an impressive record of non-performance.

For example. Google search shows well over a hundred, here is just a few of them:

“Global Warming: Those Tipping Points Are Closer Than You Think”—Wall Street Journal, April 29, 2009

“Must-Read Hansen and Sato Paper: We Are at a Climate Tipping Point That, Once Crossed, Enables Multi-Meter Sea Level Rise This Century”– ThinkProgress.org, Jan. 20, 2011

“In spite of the continued released [sic] of 90 million tons of global warming pollution every day into the atmosphere, as if it’s an open sewer, we are now seeing the approach of a global political tipping point.”–Al Gore, interview with Washington Post, Aug. 21, 2013

It seems there is always a climate tipping point in our future, and they never seem to happen. Every year we are treated to a fresh set of dire predictions, with the goal posts for when they will occur, always somewhere in the future, but never certain.

In June 2011, The University of East Anglia (UEA) saw tipping points behind every rock and tree, suggesting an “early warning system” be created. You can see the list of them in the figure below. Most of them are the same ones making the rounds in the media today and cited by the new study.

But, in 2022, 11 years later, none of those catastrophes has occurred, despite no “early warning system” ever being created. Perhaps the reason is that other peer-reviewed science shows tipping points have not happened in Earth’s distant past in response to atmospheric carbon dioxide changes.

A signifcant paleoclimate study from the University of Washington says tipping points aren’t likely to ever happen from increased carbon dioxide in our atmosphere.

There have been instances in Earth history when average temperatures have changed rapidly, as much as 10 degrees Celsius (18 degrees Fahrenheit) over a few decades, and some have speculated the same could happen again as the atmosphere becomes overloaded with carbon dioxide.

New research lends support to evidence from numerous recent studies that suggest abrupt climate change appears to be the result of alterations in ocean circulation uniquely associated with ice ages.

But even more importantly, the new study pushed by the the media in the past week based the claims of future disaster on a temperature rise of 1.5°C – the problem is, they don’t seem to realize that this has already occurred.

Below in Figure 2 is the Berkeley Earth average surface temperature record for Europe since about 1780. Europe is a good location to analyze, because some of the longest continuous temperature records are from Europe. It shows that not just 1.5°C, but 2.0°C of warming has already occurred.

Yet even with 2 degrees celsius of atmospheric warming since about 1820, the claimed catastrophic climate tipping points have not occurred.

Despite evidence to the contrary provided by real-world-data, climate alarmism over future tipping points seems to be a constant feature of the media, but they never happen – “its déjà vu all over again.”

Asserted disastrous “tipping points” may make for good headlines and story ledes, but there is no evidence any exist. Also, with the tremendous adaptability humans have shown to changing climate conditions across the course of time and widely varying environments, and the consistent progress society has displayed accompanied by revolutionary technological innovations, there is no reason for believing that humans face any catastrophic tipping points now.