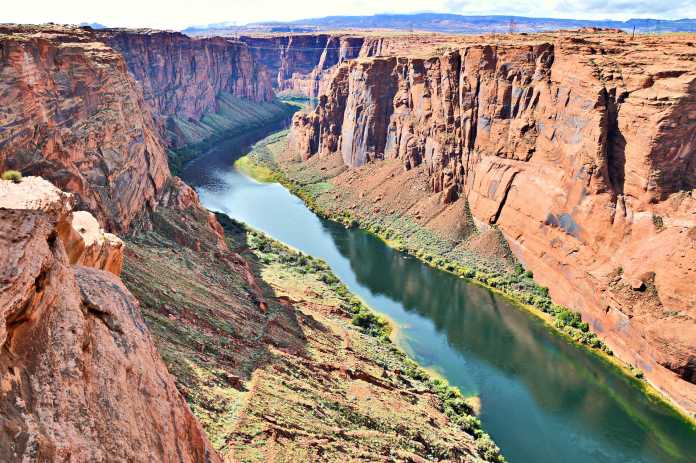 A recent article in CNN claims human-induced climate change is causing an increase in extreme weather, particularly heat waves and drought, which is driving the decline of some major rivers around the world. CNN’s report is misleading at best, and false at worst. Although the rivers CNN discusses are at low levels right now, their decline does not represent a human caused climate change, which is a long-term trend. Rather, their decline is due to a combination of ever growing populations withdrawing water from each of the rivers discussed combined with a short term drought, a temporary weather event.

A CNN photo essay, titled “The World’s Rivers are Drying Up from Extreme Weather. See How 6 Look from Space” uses a series of before and after photographs to claim the Colorado, Yangtze, Rhine, Po, Loire, and Danube revers are declining as a result of “a painful lack of rain and relentless heat waves,” which CNN makes clear “the human-caused climate crisis is fueling…,” making these rivers virtually impassable.

It is true that each of the rivers CNN photographically documents currently have extremely low flow. However, as climate scientist David Legates points out in an American Thinker article responding to CNN’s report:

[although] a lack of precipitation over an extended period of time will likely cause low flows in the area’s rivers … it is not necessarily true that the existence of low flows indicates that a lack of precipitation was the culprit. Humans need water not just to survive, but to carry out a variety of water-intensive industries including paint and coating manufacturing, paper mills, wineries, and pesticide and other agricultural chemical manufacturing, for example. Agriculture too has a high demand for water, and the simple increase in population may tax existing water supplies.

Indeed, as Climate Realism documents concerning precipitation and water levels, for instance, in Lake Mead (which is formed by water from the Colorado River) and the Great Salt Lake, and drought in the Western United States, precipitation in the states varies dramatically from year to year, but overall, over the past century, there has been no trend of less precipitation, but there has been a huge increase in population. The population and thus demands on water have grown dramatically for a variety of uses, most importantly agriculture, in states withdrawing water from the Colorado River, its tributaries and other rivers across the West. As a result, when a drought strikes, whether short-term, which is what is currently being experienced in the West, or long-term, the waterways can shrink dramatically in a short period of time.

As discussed in Climate at a Glance: Lake Mead, during the past century, much of the continental United States has enjoyed more abundant precipitation as the planet has warmed. Legates’ article confirms that population growth, not a decline in precipitation, be it rainfall or snowfall, is the most likely cause of the Colorado River’s decline.

“An evaluation of the current conditions from the USGS National Water Dashboard indicates, as shown below, that many stream gauge stations in western Colorado and Utah are near normal, and in New Mexico and Arizona, they are above and much above normal (See the graph),” writes Legates. While, as CNN acknowledges, “… around 40 million people in seven states and Mexico rely on the river’s water for drinking, agriculture and electricity.” 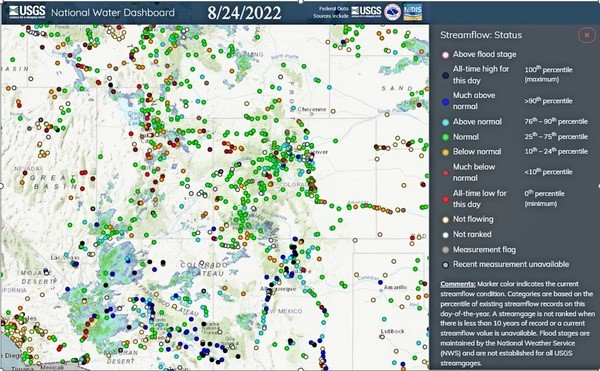 The black and dark blue dots indicate streamflow that is either at or near a record high, and the current forecast is for more rainfall. In fact, the 20th Century was the wettest century of the past millennium.

Lake Mead (highlighted by the CNN article) is drying up, not because the streamflow in the region has gone to near zero, but, as University of Alabama climate scientist Roy Spencer shows, because the population of the ‘desert’ has grown so much that the water resources of the region cannot support the water demand.

What’s true for the Colorado River and other waterways in the Western United States, is true for each of the other rivers discussed as well. Human population growth and rising demand, as well as various types of land and water alterations particular to each of the rivers CNN highlights, are to blame for low water levels in those rivers. Dam building, stream channelization, the removal or restoration of wetlands, and deforestation are among the myriad changes Legates mentions as contributing to low water levels at rivers in China and Europe.

In truth, the before and after photographs that CNN uses to support its claim that “the human-caused climate crisis is fueling extreme weather across the globe” demonstrate the weakness of its arguments. CNN’s assertion is not built on long term data. Instead, except in the case of the Colorado River, the photos used for river flow comparisons come from August 2022 and August 2021, a single year before.

“The dramatic change in just one year leads to the inescapable conclusion that this is not a climate issue; rather, it is a normal change in yearly weather conditions and local effects in dam operations,” writes Legates. “Climate change is measured over periods of at least 30 years, not a single year.”

Climate Realism has made this same point, on the distinction between climate and weather, in several articles, for instance, here and here.

CNN’s photo essay says a lot about how human activities and weather can impact river levels and flows. By contrast, it reveals nothing about the impact of human caused climate change on weather or river flows, because it provides no data detailing long-term climate changes that have occurred that would affect the rivers discussed. Indeed, the data that does exist on precipitation trends that might impact those rivers shows an increasing trend. The U.N. Intergovernmental Panel on Climate Change reports with “high confidence” that during the past 70 years precipitation has increased over mid-latitude land areas of the Northern Hemisphere, where each of these rivers lie.