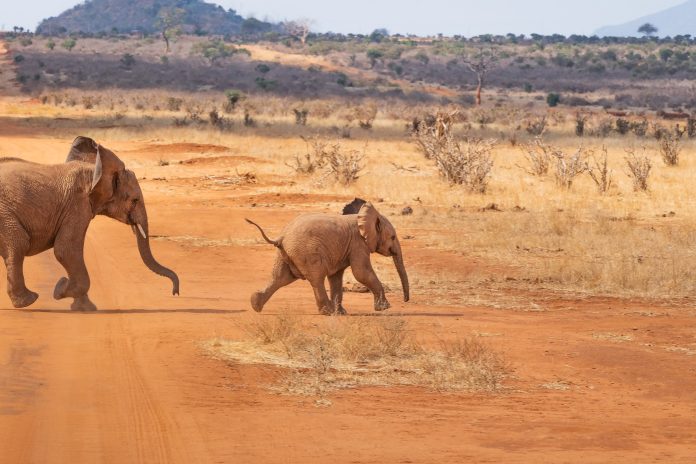 A recent article in Inside Climate News by writer Georgina Gustin leverages a tragic period of severe drought in the Horn of Africa in order to push an alarmist narrative on climate change. Gustin claims that food security is threatened by climate change, and that millions will starve as a result of it. This is false. Data show that food security has improved over the past decades of warming. If there is to be a global food crisis, it won’t be climate change that causes it, but rather the heavy handed and ultimately futile efforts at controlling the weather by regulating how people grow crops and livestock.

The piece, titled “Climate Change is Driving Millions to the Precipice of a ‘Raging Food Catastrophe’,” focuses primarily on the specific example of severe ongoing drought in Kenya and neighboring Somalia and Ethiopia.

“This year’s droughts and severe weather diminished or decimated crops across the world—in parts of the United States, Europe, China, Australia and the Indian subcontinent.

The current emergency foreshadows what researchers call “multiple breadbasket” failures, which will likely occur more often and with greater intensity as Earth’s atmosphere warms. Battered by more climate-induced weather shocks or chronic conditions like drought, the world’s farmers are projected to produce less food in coming decades as the global population rises toward 10 billion.

Blaming climate change for food shortages is not scientific, nor does agricultural data back it up. Climate Realism recently covered similar claims about Somalia, in the post “No, CBS News, Drought in Somalia is Not Being Driven by Climate Change.” Meteorologist Anthony Watts points out that Somalia has experienced similar natural weather patterns that are a normal result of the region’s geography and the local monsoon patterns. A similar drought occurred in 1975, and also lasted multiple years and resulted in crop losses, livestock death, and eventually human deaths by famine.

There is also paleoclimatological evidence that the Western part of Africa is prone to mega-droughts, especially during the period between 1400 and 1750, which coincides with what is known as the Little Ice Age.

In regards to food production, the United Nations’ Food and Agriculture Organization has data (see the figures below) that confirm continuous record-breaking cereal crop yields. With the exception of Somalia, which suffers from political violence and civil war, neighboring countries like Kenya have actually seen increasing crop yields since the beginning of recordkeeping. 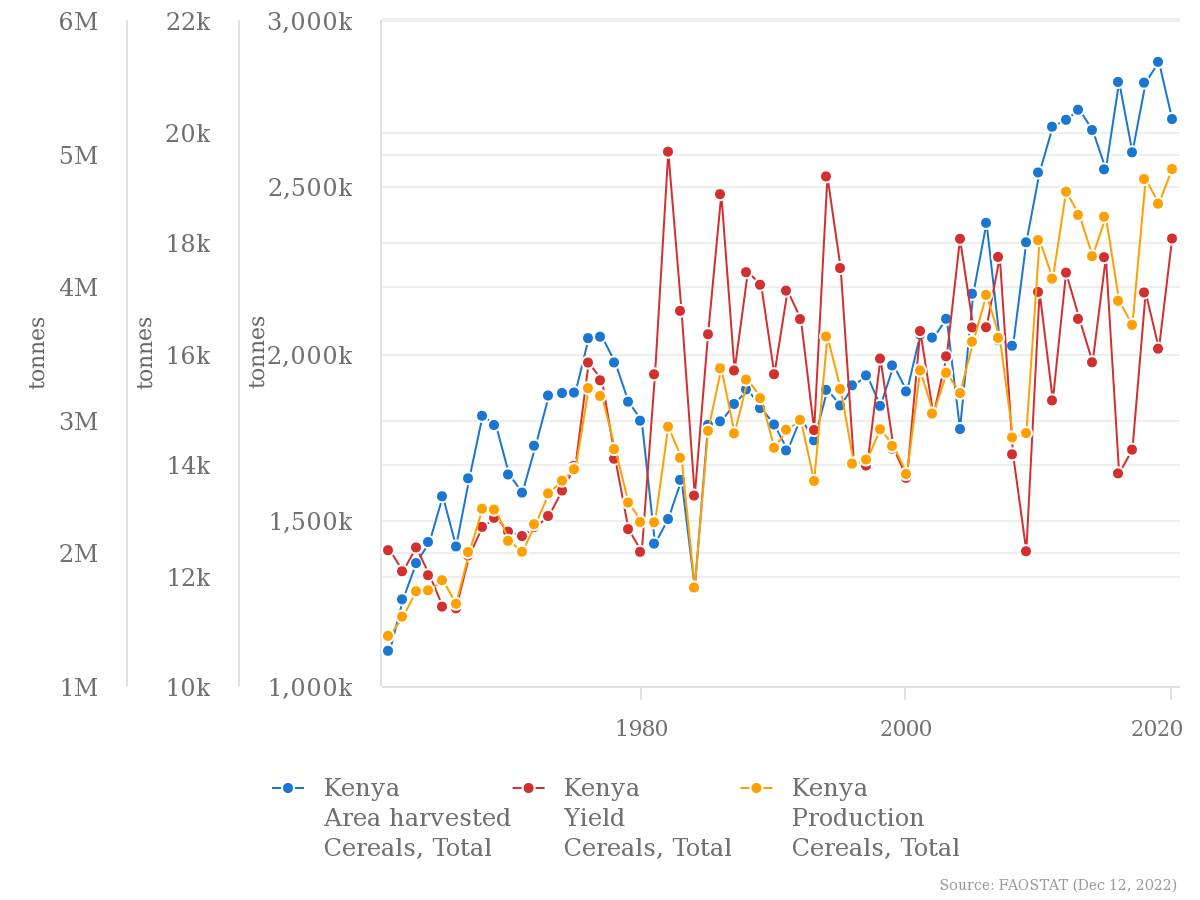 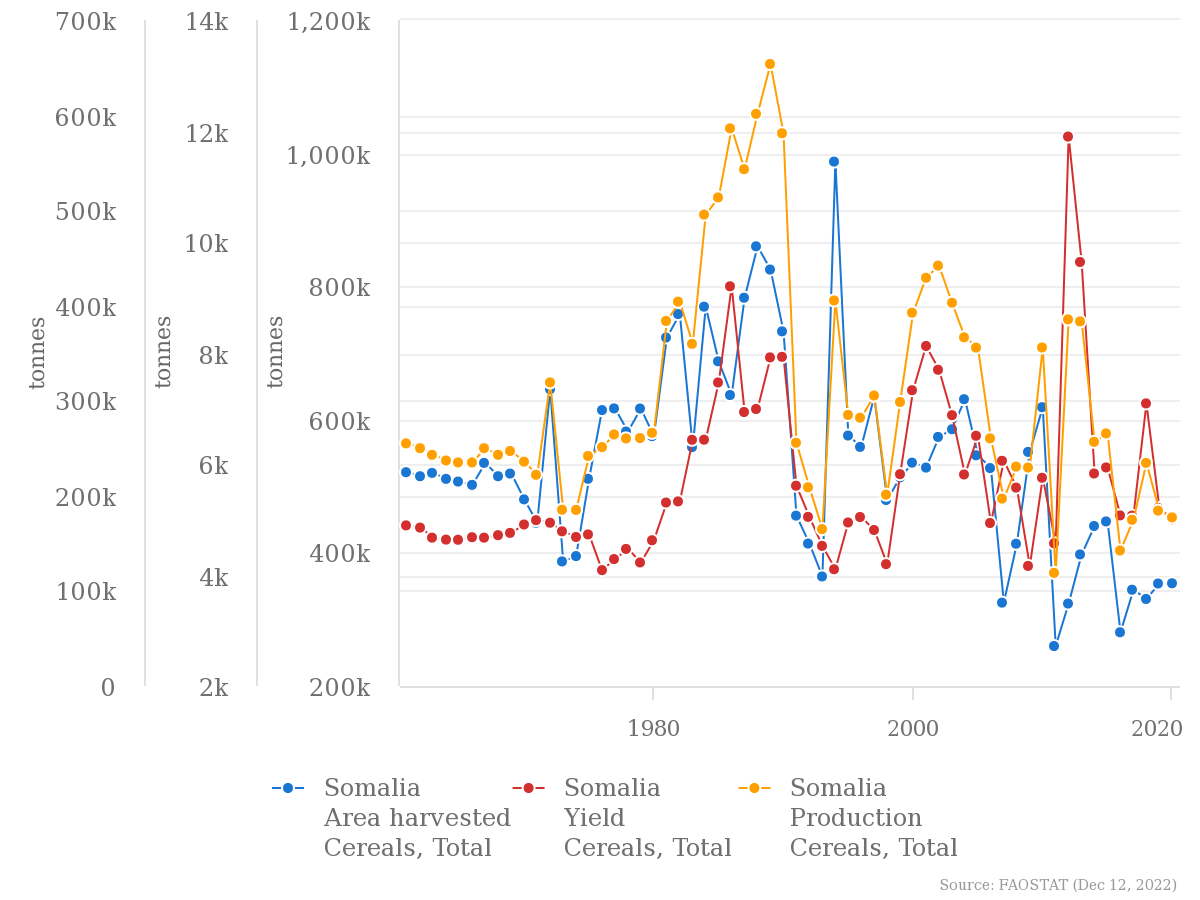 Towards the end of the piece, Gustin writes that there is a need for the reduction of fossil fuel use and methane emissions, in order to supposedly stop climate change, seemingly without seeing what that actually means for food production. Gustin also acknowledges in the post that a reduction of available fertilizers, most of which are petroleum-derived, is hurting nations in the Horn of Africa.

Both banning fossil fuels (and thus the fertilizers made from them) and restricting cattle-caused methane emissions would substantially raise food prices, which the author acknowledges is already a huge part of why there isn’t enough food aid getting to drought-stricken African nations.

This post on Inside Climate News is speculative at best. The very “fixes” that are proposed here would greatly exacerbate these nations’ ability to react and come back from future weather events, including droughts, which have existed long before the industrial revolution and will continue regardless of climate policy. Gustin, and Inside Climate News, should take a seat and really think about the inevitable downstream effects of their proposed policies, especially in light of the actual weather and long-term climate data of the region.