An ABC News article published on December 9 titled “Climate change, human activity ‘decimating’ marine life, according to IUCN Red List of Threatened Species,” makes the claim that humans, via climate change, are killing the Manatee-like animal known as the Dugong, found in East Africa and New Caledonia, plus several other marine species. This is false. Evidence indicates a variety of factors are behind the decline in various marine species discussed in the story, Climate change is not among them.

The author, Julia Jacobo, makes this factual statement deep in the article:

The primary threats the dugongs face are unintentional capture in fishing gear in East Africa and poaching in New Caledonia, and boat injuries in both locations. In addition, oil and gas exploration and production, bottom trawling, chemical pollution and unauthorized coastal development are damaging and destroying the seagrasses that dugongs depend on for food, especially in East Africa, the conservationists said.

The degradation and loss of seagrasses in New Caledonia is the result of agricultural runoff, pollution from nickel mining and coastal development, and damage from boat anchors.

After laying out these facts, Jacobo evidently couldn’t resist adding a little climate alarm to the dugongs’ tragic tale, making this unsupported claim about climate change:

Wikipedia says this about the Dugong:

Despite being legally protected in many countries, the main causes of population decline remain anthropogenic and include fishing-related fatalities, habitat degradation and hunting. With its long lifespan of 70 years or more, and slow rate of reproduction, the dugong is especially vulnerable to extinction. (emphasis authors).

What’s missing from Wikipedia’s entry is the phrase “climate change.” Compare that to Jacobo’s statement “Climate change also presents a threat throughout the dugongs’ wide range.”

It is almost as if Jacobo decided to “throw a bone” to climate change advocates. Her analysis of the threats to abalone shellfish is even more misguided.

She describes the central problem:

Abalone species are sold as some of the world’s most expensive seafood and are especially vulnerable to poaching and unsustainable fishing practices.

In South Africa, criminal networks, many connected with the international drug trade, have devastated populations of the perlemoen abalone by poaching, according to the IUCN.

At this point her description of the dangers threatening abalones goes off the rails:

Marine heat waves, many spurred on by climate change, are also killing off the species, animal conservationists said. About 99% of Roe’s abalones, located in the most northerly regions of western Australia, have died as a result of mass mortalities from the severe heat waves.

Again, Jacobo throws a bone to climate change alarmists by suggesting “marine heat waves” are driven by human-caused climate change. In reality, events like that have likely been going on for millions of years, but we’ve just now noticed them due to the existence of satellites, which only started tracking sea surface temperatures in 1981.

The term “marine heat wave” didn’t exist ten years ago, it only came about after the media coined the term in response to “the blob,” another coined term for a large mass of relatively warm water in the Pacific Ocean off the coast of North America that was first detected in late 2013 lasting into 2016.

Neither the “the blob” nor “marine heat wave” are part of the official meteorological lexicon, and the fact that both started being used in recent media stories is evident in the tracking of phrase use by Google Ngram, seen in the Figure below. 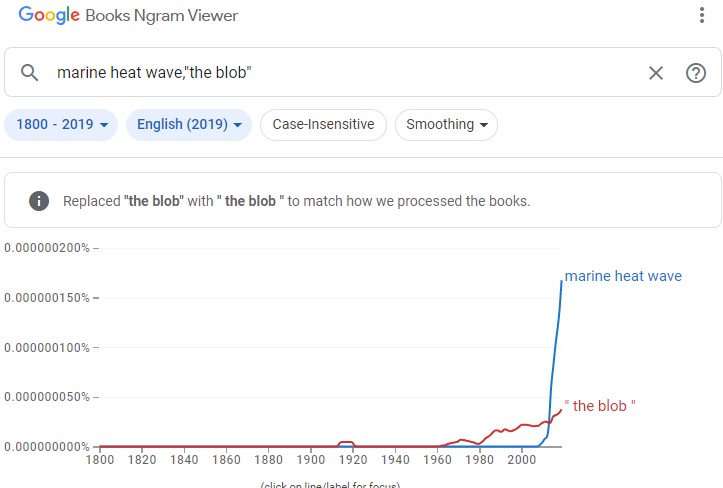 Earlier uses of the phrase “the blob” are likely due to the 1958 original and the 1988 remake of the movie with the same name, but a clear uptick coincided with the appearance of “marine heat wave.”

The point here is that the media doesn’t give a whit about meteorological or climatological accuracy, they’ll coin a phrase to make a normal, natural, meteorological event seem scary and threatening. When such phrases become commonly used by the media, official sources, such as the National Oceanic and Atmospheric Administration (NOAA), get tasked with explaining them to the public. In the NOAA article “So what are marine heat waves?” the agency admits it is only a recently coined phrase:

How long have scientists been documenting marine heat waves?

Calling them marine heat waves – that’s been the last roughly five years. It has been recognized for a while that ocean temperatures and properties fluctuate, but the focus on events rather than slower changes in the ocean is newer.

Journalists like Jacobo won’t tell you this. It ruins the climate crisis narrative they are actively pushing.

Jacobo makes another false connection between marine species decline and climate change in her discussion of the plight of the pillar coral:

The pillar coral’s population has shrunk a whopping 80% since 1990 and its biggest threat is stony coral tissue loss disease, a highly contagious disease that emerged about four years ago and infects between 90 and 100 meters of reef per day, according to the IUCN.

The corals have become more susceptible to disease as a result of bleaching caused by increased sea surface temperatures and excess antibiotics, fertilizers and sewage running into the sea, the conservationists said. In addition, overfishing around coral reefs has depleted the number of grazing fish, allowing algae to dominate and putting further pressure on corals.

The ABC News article’s headline blames climate change, and so readers will assume pillar coral is part of that. But, as was the case in the two previous examples, there is no data linking climate change to the decline of pillar coral. By contrast, there is copious evidence linking unregulated human activities, such as boating, overfishing, and trawling to these ocean losses.

Corals evolved during a period when ocean temperatures were significantly higher than today. The historical evidence shows coral colonies have expanded their range even as ocean temperatures have risen and fallen during glacial and interglacial cycles. While spikes in sea surface temperatures up or down can contribute to coral bleaching, as explored in numerous Climate Realism posts, here, here, and here, for example, when this occurs most corals recover, and overall coral are increasing during the present period of modest warming.

Jacobo should be applauded for correctly identifying myriad factors that threaten the health and survival of various marine species. By the same token, however, her article should be derided for unjustifiably throwing climate change into the mix of factors negatively impacting ocean life. Rather than jumping on the climate crisis bandwagon, Jacobo should have done the modicum of basic research necessary into the data; had she done so, if she were honest, Jocobo would have either left climate change out of the story or reported that little or no evidence exists linking climate change to sea species’ declines.

It is shameful that the media has abandoned investigative journalism to become little more than a tool for the climate change narrative.