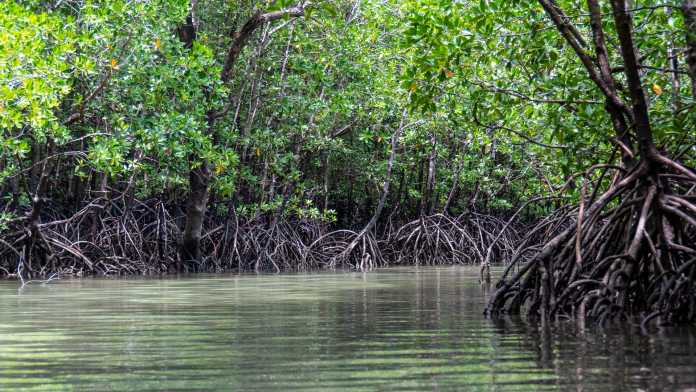 The Weather Channel published an article on its website Wednesday claiming global warming threatens the extinction of mangrove trees – which rely on warm temperatures to live – within 30 years. Common sense and scientific evidence reveal that the Weather Channel’s alarmist claim is preposterous.

Mangrove trees grow along shorelines in saltwater or brackish water. They provide many ecological benefits, including filtering water pollution, anchoring shoreline soil, and providing breeding grounds and host environments for many marine species.

Mangroves are very susceptible to frost events and therefore are limited to the tropics and subtropics. There are no coastlines that are too warm for them, as they grow throughout the tropics and thrive even along the equator on all three continents that span the equator.

The Journal of Ecology study also mangroves dramatically increase their growth and concentrations under warmer conditions. “We found that chronic warming doubled plant height and accelerated the expansion of mangrove into salt marsh vegetation, as indicated by a six-fold greater increase in mangrove cover in warmed plots compared to ambient temperature plots,” the study found.

How, then, does the Weather Channel claim global warming threatens to make mangroves go extinct within 30 years?

The Weather Channel cited a very dubious alarmist study regarding mangroves and sea-level rise, and then further misrepresented the dubious study to make it appear even more alarmist. One could call the Weather Channel’s (mis)representations bad science, but even that would likely be too kind.

In the study cited by the Weather Channel, modelers attempted to discern the pace of mangrove migration 10,000 years ago when global sea level dramatically rose. The modelers then forecast that mangrove forests can migrate to higher elevations at a speed of no more than 7 millimeters (0.27 inches) of sea-level rise per year.

Anybody who lives near mangroves knows mangrove forests can migrate much faster than that. Mangrove roots can spring up from the soil several feet from the trunk of the host mangrove tree. Moreover, mangrove seed pods float on the water and can therefore take root at the same pace with the rising waters and tides. Accordingly, mangrove forests can easily keep up with rising sea level, and can certainly migrate more than 0.27 inches of sea-level rise per year.

Regardless, according to NASA satellite measurements, sea level is currently rising at approximately 3 millimeters (0.1 inches) per year, a pace that has held steady for at least the past 25 years. That is less than half the pace of what the modelers dubiously predict as the upper pace of mangrove migration. So, even at an upper migration limit of 0.27 inches per year, the authors of the Weather Channel-cited study acknowledge mangroves are easily keeping up with modest sea-level rise.

Nevertheless, even if dubious rapid and immediate acceleration of sea level occurs, and even in the unlikely event that mangrove systems cannot migrate at 0.27 inches per year, the year 2050 would be the year in which mangroves would first start to struggle to keep up with sea-level rise – it would not be the year in which all mangroves all over the world become extinct, as the Weather Channel claims.

Moreover, in the event all those dubious events occurred, people could easily plant mangroves at the slightly higher shoreline. It is not that difficult a task.

The nature of alarmism is to make predictions too far into the future for doomsayers to be held accountable during their lifetimes. This particular prediction is for 30 years from now, which will allow most people alive today to verify whether the mangrove extinction prediction comes true. The alarmist prediction will certainly not come true, proving who the “science deniers” truly are.