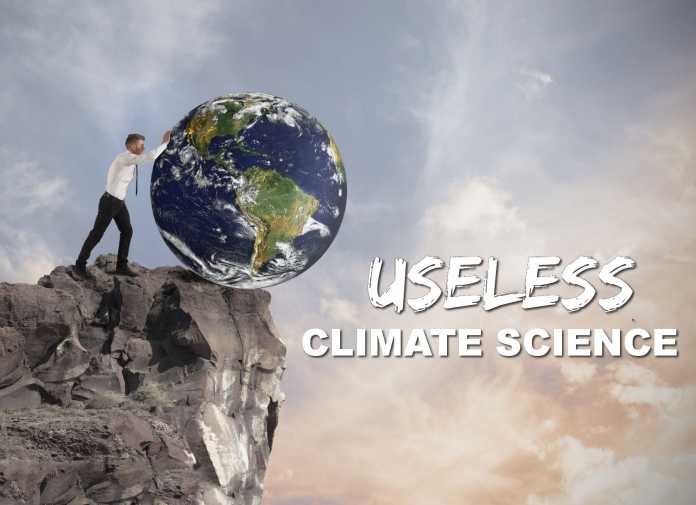 In an American Thinker article, titled “The Utter Uselessness of Climate Change ‘Science,’” the author, Jack Cashill, exposes the fact that mainstream climate change research has abandoned the scientific method in pursuit of stoking climate alarm.

“[T]he science behind climate change has no more predictive real-world value than the science behind COVID,” writes Cashill. “When put to the test, scientists cannot tell you what will happen next year, let alone next century, but that does not stop them from pretending they can.”

The example Cashill discusses to show how climate science has failed to follow the scientific method in order to hype alarming “settled science,” is recent shifts in claims about Lake Erie, where he has a home.

Cashill points out just a few years ago the public was flooded with stories carried by the mainstream media, including the Milwaukee Journal Sentinel (MJS), National Geographic, and Youtube, asserting the science was settled, the Great Lakes were irreversibly shrinking due to human-caused climate change.

For the MJS the debate was over concerning the impact of climate change on the Great Lakes.

“In 2013, Peter Sinclair, reputed to be ‘the sharpest climate denier debunker on YouTube,’ reprinted a section of [the MJS] article under the headline ‘Lower Great Lakes Levels – Another New Normal?’  To dissent was to risk ridicule, to be named Sinclair’s ‘Climate Denial Crock of the Week.’”

The “settled science,” publicized by MJS, National Geographic, Youtube and others was false at the time they were writing about it. Cashill points out, had those involved in writing the stories only bothered to look at historical data they would have found the Great Lakes had recorded much lower levels in the past. EPA reports the lowest water levels recorded since the 1860’s came during the dust bowl era of the 1930s—simultaneous with the decade during which the highest temperatures of the 20th century were recorded.

The so-called consensus science on the shrinking Great Lakes has reversed itself. Cashill reports it is now evidently settled science that the Great Lakes are due to set new records for lake levels due to climate change. What was the “new normal” of lower levels in 2013 is now passé. With Great Lake levels now having recovered to their historic norms, the New York Times and other outlets are warning rising Great Lake levels, caused by human climate change, threaten to submerge homes along the Great Lakes’ shores.

“The higher water, which set records this summer on some Great Lakes, could be part of an expensive new normal,” [wrote the NYT]. Left unsaid was that this ‘new normal’ fully reversed the old ‘new normal’ from just six years prior.

Whatever the trend, climate change activists have been quick to find a new, scary rationale to explain it.  ‘Within about a decade, the Great Lakes have gone from record low levels to record high levels, a stunningly fast swing,’ claimed the enlightened folks at the Alliance for the Great Lakes.  A quick look at the charts shows this claim to be false for each of the Great Lakes, but I digress.

‘Scientists are in agreement that the sharp shifts in water levels are due to climate change,’ the Alliance folks continued.  ‘More specifically a warming climate will continue to cause extreme weather, including severe floods and droughts, which spells disaster for lakeside homeowners, towns and cities, tourism, and shipping.’

“Let’s see.  In the 1930s, a substantial warming period caused a major shrinkage in the size of the lakes.  In the 2010s, a ‘tiny bump in air temperatures’ caused the lakes to shrink anew.  In the 2020s a ‘warming climate’ was producing ‘severe floods.’  This isn’t science.  This is sophistry of the genus Marxist.”

Perhaps the biggest flip-flop of all came in the 1980s. As detailed by the John Locke Institute, for example, in the 1970s the mainstream media, following the lead of many government funded researchers was warning the world faced a pending ice age, partially caused by pollution from human energy use. Jump forward a decade and some scientists and the media switched course, to assert human energy use was causing runaway global warming.

More recently, in a Climate Realism post from June 9, titled “Climate Alarmists Flip-Flop Again: Cancel their Monsoon Drought Crisis, Now Claim Too Much Rain,” James Taylor, president of The Heartland Institute, showed climate alarmists have shifted their narrative of the settled science concerning the impact of human climate change on monsoons in India.

In August 2020, multiple media outlets were warning that recent research indicated climate change was weakening monsoons and reducing rainfall from them. This, the media claimed, threatened to destroy agriculture by reducing the amount of water available to farmers. Now, in June of 2021, less than a year of climate change later, media outlets are hyping some scientists’ claims that climate change is causing more severe monsoons, with greater amounts of rainfall. This, the media now claims, threatens to increase flooding and wipe out farming in India.

Poor Indian farmers. It seems, they just can’t win, except for the fact that, as reported here, here, and here, they are winning with record setting crop yields even as monsoon seasons wax and wane.

Science is rarely if ever “settled,” and climate science is even more uncertain than what is known in other branches of science. This is true, in part, because it is a fairly recent branch of research. Unfortunately, another reason climate science is uncertain is because, in its formative years, rather than being driven by a pursuit of knowledge and the truth, it was captured by politically motivated actors who knew the results they wanted—bigger government control over peoples’ lives—and funded the alarmist research promoting that goal.

The facts about neither Great Lakes water levels nor monsoon cycles throughout history have changed. Only the spin put on it by politically motivated activist/scientists has. The latter is ideologically driven propaganda, not science.

Thanks, American Thinker, for Exposing the Lack of Science Behind ‘Climate...

There Is No Climate Change Consensus